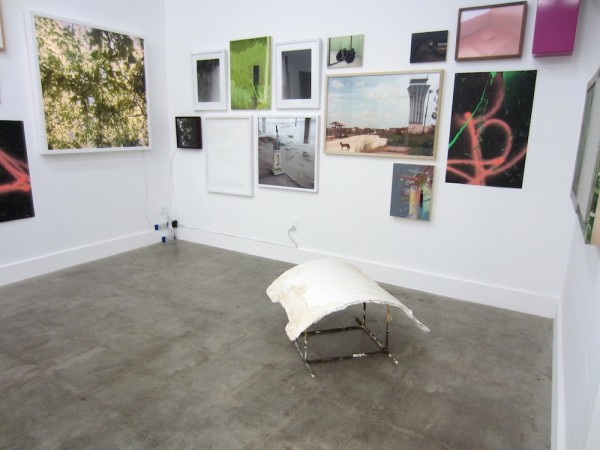 Gallerists Brian Willey and Thao Votang are playing right on key with their current exhibition, a group show aptly named A Catalogue that ushers Tiny Park in Austin from 2013 to 2014. Parading the gallery’s stalwarts in addition to artists the gallerists have had their eye on but have yet to exhibit, this salon of 65 works from over 30 local artists turns the gallery’s name into irony: there is nothing tiny about this show.

I don’t have much sympathy for non-thematic group exhibitions. They are prone to thoughtless curating and the shotgun consumerism of year-end sales at any shopping center. Votang and Willey are using the model in a different way; what the viewer sees is a catalogue, but rather than a sales catalogue, it’s a card catalogue. Tapping into the international visual arts trend of archiving the show presents a history of artists who have worked with Tiny Park and others who may find their way onto the calendar in years ahead. This is a show about transition. It’s a demarcation from where the gallery has been to where it is going.

The show provides the opportunity for less established artists to show with those who have built reputations. Claude van Lingen, who has exhibited internationally for the last four decades, exhibits alongside other artists who were born well after he received his MFA from Pratt in 1980. 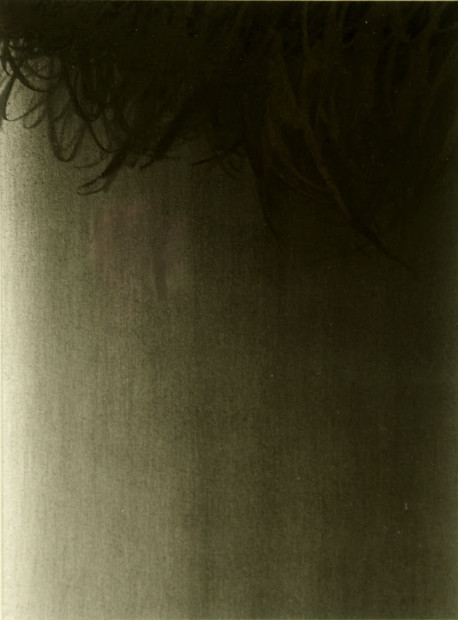 Van Lingen is exhibiting three works from his perpetual 1000 Years From Now series (read Brian Fee’s recent article on van Lingen’s show at Co-Lab here). In the same vein as his “museum-worthy retrospective at N Space” (to use Fee’s words), van Lingen’s art at Tiny Park brings home the concepts of time and decay using the floods of Onion Creek as subject matter. Choosing a deeply somber charcoal instead of the whimsical mixed media found at Co-Lab, van Lingen has created layered abstractions of dark whirlpools and menacing rain. Three works bear the title 1000 years from Now, Floods of 2013, Onion Creek (#1, #2 or# 3), and that three of those who lost their lives in Austin’s fatal deluge this past year did so in the troubled Onion Creek area, where the river’s floods are at the root of the controversy over housing in this neighborhood. It is these sorts of overlooked cycles, damages, and the act of simultaneously looking back and looking forward that are at the center of van Lingen’s practice. 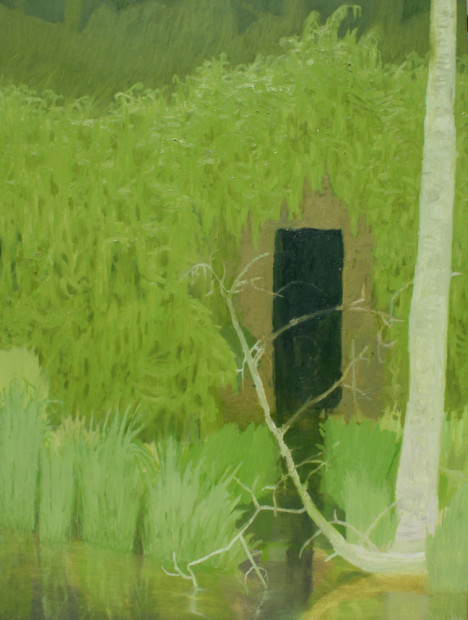 Won’t That Be a Happy Day, Joseph Noderer

Joseph Noderer’s work Won’t That be a Happy Day is sandwiched between two of van Lingen’s charcoals. The oil painting is not nearly as ominous as van Lingen’s work, but they aren’t wholly dissimilar. Both share a layered build up of repetitive marks to create a translucent screen, placing further illusions in the distance and at the fore. Both share a love-hate relationship with detail. The largest difference between the two lies in mood. When I see van Lingen’s works I feel like I’m drowning. When I see Noderer’s painting I feel like an old man on a porch. Whatever foreboding I take from Won’t That be a Happy Day, I blame on interference from the overpowering Onion Creek.

This brings me to the one, seemingly unavoidable problem I have with this otherwise delightful exhibition. The show is organized through visual similarity, which overcomes the cramped walls, and creates a smooth viewing experience, certainly a good move by the gallerists, but at times it comes at the cost of blurring one artist to the next. It is true that good curating creates new meaning through the thoughtful positioning or contextualizing of art, but if that meaning begins to override the original intentions of the artist we wander into a moral gray area. 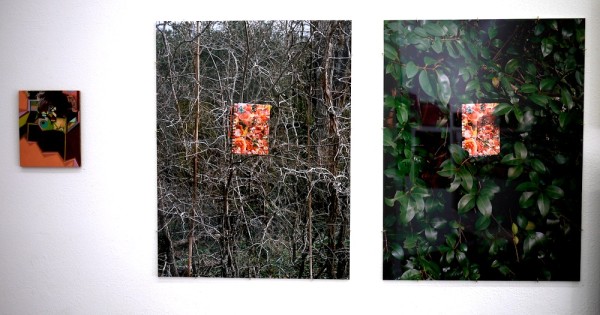 Take works by Rebecca Marino and Dan Sutherland for example. Marino’s pair of Dear Diary photos depict a brightly colored diary strangely framed by and partially submerged in broad margins of dense foliage. Marino’s work sets up a repetition as though the diary is traveling from scene to scene. This repetition is completed by the positioning of Sutherland’s quixotically titled Mop Boy Head Scruff, an oil painting that comes quite close to matching in size and color the diaries in Marino’s photos. In this arrangement, the illusory aspect of Sutherland’s painting is weakened, and it ceases to act as a window and becomes an object.  Marino’s diaries then change into displaced paintings. The viewer is met with two situations that may have never existed in the artists’ studios.

When these new meanings, created through proximity, take a backseat to the works’ original intentions, a powerful and productive layering can occur. View the works at Tiny Park first as discrete individual pieces, and then secondly in light of their neighbors. With only two or three inches between each work, the exhibition doesn’t exactly lend itself to this type of parsing, but, viewed in this fashion, the show’s worth is greatly increased.

Beyond this single flaw, inherent in cramped group shows, Willey and Votang have put together a stunning exhibition. They’ve amassed an impressive array of work from a wide swath of Austin artists. In addition to bold works by Sutherland, Marino, Noderer, and van Lingen, I recommend spending extra time with Sandy Carson’s Baby on Ferry, Post IKE, a well-composed photo made of equal parts humor and disquietude; Robert Jackson Harrington’s fractured take on memory through mixed-media drawings; Scott Saunders’ clean-crafted science fiction wall sculptures; Sandy Carson’s Coyote at Mueller Airport, a photo of a coyote at Mueller airport; and the anti-portrait video work Damask with Floral Vines from Janaye Brown that left me itching to see her screening of multiple works scheduled for March 1 at Tiny Park. 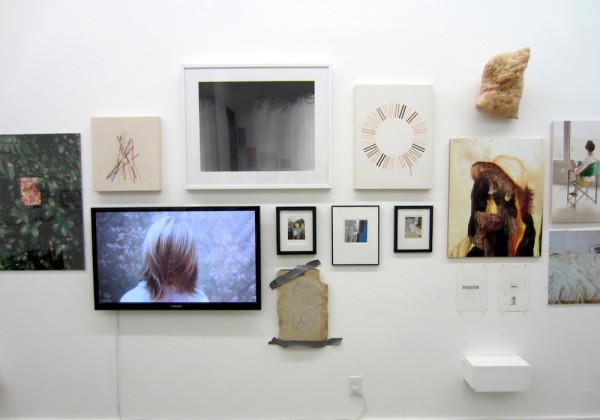 A Catalogue is a must-see for anyone looking for an introduction to Austin contemporary artists, or to brush up on what area favorites have been producing. The exhibition is not without its problems, but it is certainly worth the time to untangle. The show is dense, thought provoking, and takes the pulse of the city’s art scene. For Tiny Park, it looks like an interesting year ahead.

Thanks again Glasstire and Brian and Seth for your coverage of my work. I really appreciate it.