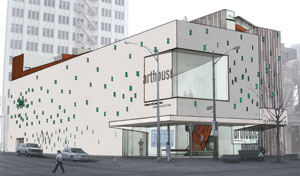 The new and improved Arthouse

Arthouse in Austin is a layered place. As the Kunsthalle of Texas’s capital city, its projects are varied, from the ballet music installation extravaganza of the forthcoming Cult of Color: Call to Color – Notes on a Collaboration to its Emergency Relief Fund and affordable health care for artists.

It is also layered in an architectural sense. Undulating layers and perforated surfaces are the two primary formal themes at work in the modernization of the Jones Center of Arthouse.

“We want to preserve the layers of this building’s past uses in our renovation of the Jones Center,” said Paul Lewis, partner in Lewis.Tsurumaki.Lewis (LTL), the New York based architecture firm that was chosen to redesign Arthouse. The modernized version of Arthouse will triple its total space from 7,000 square feet to 20,830 square feet. Ground will be broken for construction the summer of 2009 and completion of construction is projected some 16 months later. 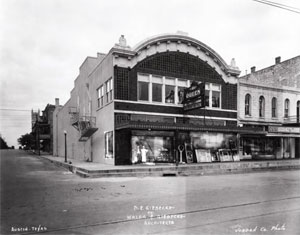 Once the Queen Theater and then a Lerner Shops department store, the building that houses the Jones Center, the official name of Arthouse on Congress Avenue in downtown Austin, shows its past in ghostly strata on the walls. Painted patterns of vases, vines and foliage in dark mauve and gold are reminders of the space’s use as a theater beginning in 1920. Steel beam reinforcements were added in 1956 to transform the space into a downtown shopping mecca. Like so many shadowy pentimenti under the surface of a painting, dusty lines on the wall from the display shelving of the department store overlap with the more colorful tumbles of leaves from the theater.

Building on the 1998 renovations by the Dallas based architect Gary Cunningham, LTL will move the entry to the building from its current location on 7th Street to the front of the building on Congress Avenue.

In order to emphasize the minimalist, cantilevered awning from the mid-century designs of the department store, the architects have decided to make the awning a continuous plane, carrying it from street level outside to the foyer inside. Several small holes functioning as plug-ins for electricity or to hang art, will perforate the surface of the floating plane overhead inside. 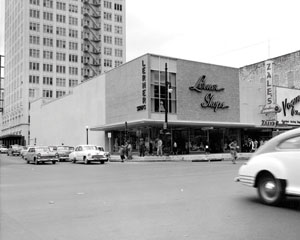 A similar type of perforation is present to greater effect along the façade that wraps the building from street-level along 7th Street to the second story on Congress Avenue. In order to avoid invasive cuts in the wall and as a means of preserving the layers of old architectural programming on the inside, LTL devised a system of subtle and non-invasive fenestration. Instead of conventional double-hung windows or modern ribbons windows, there will be 162 laminated glass blocks dotting the surface of the building. They will be strategically placed along the wall to accommodate functions on the inside of the building. Glass blocks clustered up high will jut out from the building several inches, while those along the sidewalk will run flush with the building’s white surface.

The grandest part of LTL’s intervention occurs upstairs, on the second story and the roof terrace of the building. Though extant as part of the building since Arthouse purchased it in 1995, the second story and roof of the Jones Center have lain dormant and unused because they were not up to city planning codes. LTL plans to update them, making them safe for people and feasible for exhibitions, lectures and projections. A new, similarly perforated stairwell located in front of the Congress Avenue entry will unite lower and upper levels.

The mullions of the large window on the second story looking out to Congress will be removed in order to transform it into a broad, clean plane for video projection–both inside for intimate gatherings and outside for public display. 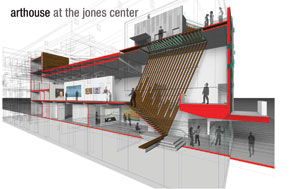 The roof terrace will function as an event space, with a permanent wall located to the south side of the site for video projection, an open space for installation art and traditional exhibitions and a service space for catering. Light peeks in underneath one’s feet as the wooden ground plane of the roof terrace is perforated like the interior awning, stairwell and wall wrapping the building. The floor is interspersed with long, thick panes of glass à la the sidewalk-level glass nodules in Chicago and New York that provide subterranean lighting for subways.

The building, in its new shape and form, will be a flickering beacon in the urban fabric of Downtown Austin. Using innovative materials, LTL makes a bold statement that doesn’t overwhelm the site or, perhaps even more important, the $6.6 million Arthouse budget. With this tasteful and subtly futuristic project, Texas’s oldest statewide visual arts organization ensures its existence for many years to come.

All images courtesy of Arthouse.

yeah but i can’t cover everything…

this one from the turner prize.
it’s international!

here is the link: http://blogs.guardian.co.uk/art/2007/10/mark_wallinger_stole_my_idea.html

how old is it?

how is it statewide?

Thanks for attempting to post the link to Arthouse’s web page – I think this one should work: http://www.arthousetexas.org/index.php?_page=load_page

Arthouse was founded as the Texas Fine Arts Association in 1911. There is a fairly detailed history of TFAA/Arthouse if you follow the link above. While the organization’s activities have evolved over the years, Arthouse remains committed to its statewide mission. Statewide programs include The Arthouse Texas Prize, an Emergency Relief Fund for Texas artists, and Art On Tour, which provides Arthouse-organized and curated exhibitions to venues across the state at very reasonable rental rates with a focus on communities without ready access to cutting-edge contemporary art.

you know, i think some other bloggers on this site hate you because you use big words. you might consider dumbing it down, you know, for other people. not naming names. just maybe they are confused.

doing new things, it’s always hard. you work it out though.