by Rainey Knudson May 27, 2011
FacebookTwitterEmail 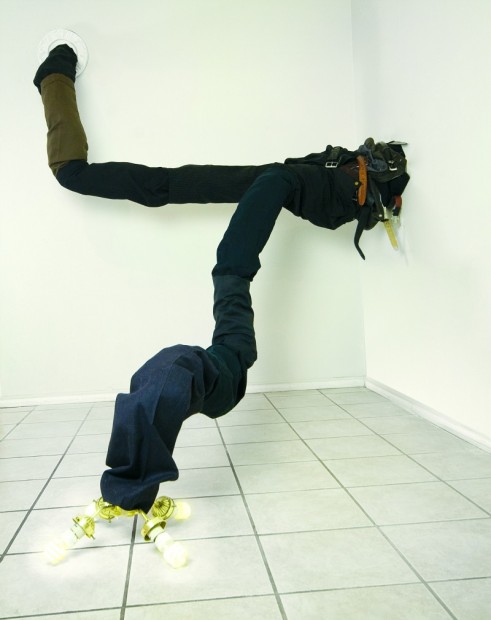 Most everyone was pleased with the clear, focused vision for the 2011 Texas Biennial. It was a brilliant success, with a tightly curated, single exhibition put together by a well-known curator from out of state. The show itself was held in a great institution in a city other than Austin, and drew audiences from all over the state. Texas art fans argued over the show, debating which artists should and shouldn’t have been included. The 2011 Biennial was a must-see exhibit that purported to feature the very best art being made in Texas. Transcending its roots as a confusing, rag-tag bundle of shows generated by and (mostly) for Austin artists, in 2011, the Texas Biennial finally arrived.

Well, to be fair: organizers of the 2011 Texas Biennial succeeded, with very little money, in expanding its scope beyond previous incarnations. They greatly increased awareness of the event. This year’s curator was New York-based copyright attorney, arts writer and former vice president of Creative Commons, Virginia Rutledge. She poured a heroic amount of energy and effort into it, acting not only as curator but ultimately wearing pretty much any hat that was required. If you’ll pardon the sports metaphor, Rutledge took the Biennial on her shoulders and ran with it.

Here on Glasstire, Sarah Fisch reviewed one of the shows Rutledge curated, praising the interesting range of work as well as the thoughtful installation and ambitious scale of some of the selections. However, Fisch also pointed out that, regardless of the quality of some of the Biennial shows, it remained a confusing hodgepodge of events.

Since its origins in 2005, the Biennial has always been held in multiple venues. This weakens its impact, and the diffusion was exacerbated this year as the number of participating venues exploded. Biennial organizers cast far too large and amorphous a net by staking a claim to seemingly all visual art happening during its timeframe. Spaces were invited to christen their long-planned shows as “Texas Biennial” shows, regardless of whether they had any real connection to the Biennial.

Unfortunately, there was no clear delineation between the shows that Rutledge curated (i.e. the “official” Biennial shows), and those that just had a Biennial tag on them. Was there a flagship exhibit? Were some meant to be projects? Who knew?

This strategy of if-it’s-happening-in-Texas-it’s-Texas-Biennial-art reached a rather ludicrous apex (or nadir) when projects that have been around for months, and in some cases years, were designated as Texas Biennial projects [see James Magee’s The Hill (25 years in the making) or Mary Ellen Carroll’s long-planned 180 House]. When the Biennial laid a claim to some artworks in the Cowboys Stadium, it felt like Russia planting its flag on the ocean floor at the North Pole. Trenton Doyle Hancock’s piece at the Cowboys football stadium was never a Texas Biennial project, and it’s ridiculous (to say nothing of a little surreal) to claim it as such.

In short, the 2011 Biennial tried to do too much while lacking a clear vision. But the model for a successful visual art biennial is well-established in the world, and the Texas version would not need to make huge adjustments to improve. Here might be some:

All that said, having the Biennial is a good thing, and the organizers who’ve stuck with it for seven years now deserve our collective praise (and probably way more money than they’re earning off of it). And the Biennial did make enormous gains this year, growing and getting far more attention statewide. It only needs to refine its vision and carefully build on this year’s success to coalesce into something truly outstanding in 2013. The audience may still be a little confused, but one excellent event will erase all that. Here’s hoping it can happen.

Wonderful positive comments Rainey. I would like to add more widely announced and publicized.

Rainey, the Biennials, in Texas go back to the 1960″s, as I recall from experience. The venues, for the initial opening, were rotated from San Antonio to Dallas to Houston, every two years, having one selection of works as a traveling show. “Careers” were “made” with the top prize winner.
Everything you have bullet-pointed is a must and would bring it back to
where it began. Thank you for this doable list of sanity. Will it be heeded?!?
Over the rainbow,
HJB

Excellent list and a hard loving review-
I have strong opinions! Sadly, I missed this iteration so I’ll sit quietly.

This evaluation of the Texas Biennial is similar to the one seen on the Glasstire messageboards about 6-8 years ago.

Unfortunately, their communication has usually been about 2 months late (by my estimations) about everything they do. Yeah, this is something they should really work on. Honestly, it should’ve already been figured out.

But I stand, as I did 8 years ago, against moving the Texas Biennial from Austin and/or consolidating it into one host venue.
This Texas Biennial (since 2004-05) was started by a group of artists and artist run spaces when they decided to COLLABORATE in order to make this event happen.
That’s how artmaking happens in Austin.

Artists make it happen. And they usually have to reach out to each other for help.

Traveling in order to see art is part of the Texas experience. Why shouldn’t the Biennial reflect that?
Would the COMMUNITY still support it if a HIERARCHY of participating organizations was clearly defined?

Would the Texas Biennial remain “an INDEPENDENT survey of contemporary Texas art” if a singular INSTITUTION was crowned host?
The fact that the Biennial was created by Texas artists for Texas artists rather than by an institution, is what makes it unique in the field of biennials.

Smaller art spaces come together to make this event happen because that is the core of why the Texas Biennial exists.
It is not one city or one institution coming out on top and shouting, “We are the prime example of Texas art!”
It is more of a grassroots phenomena where individuals collectively echo Dr. Suess’ microscopic The Whos stating “We are here!”

But yes, I wholeheartedly agree:
“It only needs to refine its vision and carefully build on this year’s success to coalesce into something truly outstanding.”

You can polish this thing up with good intentions. Bring in the tourists to prove we are not provincial. We respect Arnold Bode for his vision in that quaint town of Kassel in 1955, but a copy of a copy has no luster.

What is the goal of a Biennial? Highlighting regional production, reputation boosters, cocktails and insider trading.

I thought Biennials had been replaced by the VHS tape or was it the Trade Fair. The big ones will continue, but in Texas we cannot even spot a Golden Duckling.
If my friends get in I am cool with that, but does it help their sales on the international market?

I am not proposing ArtBasel San Antonio, or some other bootleg DVD of CSI Miami. This collective enthusiasm could use some imagination. I am also not re-proposing Jens Hoffman’s idea.
http://www.e-flux.com/projects/next_doc/index.html

Work outside these worn international models. Embrace and affirm different frameworks and models. Work with the strengths of Texas (NASA, Marfa, South-by-Southwest) and develop something new and extraordinary.

Here’s a vision: imagine a space-shuttle sized warehouse just crammed with all the Texas art you could fit. No jury, just bring your art and dump it. Pathways could be preserved with blue masking tape.

Great review. I was excited when I saw that part of TB was going to happen in Dallas. Then found out it was the art at the Cowboy Stadium!?!!

I do like Bill’s idea of using the just retired space-shuttle hanger for the next TB. This would help TB stay clear of the politics and self promotion that are a natural part of large established art museums.

I like the shuttle idea. Where would you “dump” it?

Rainey,
I would have to concur with your suggestions, and with HJ Bott on his comments regarding the Texas Biennial – that is, if we are talking about the original Texas Biennial. If we are talking about the Austin Biennial, then that is another animal all together, and in which case, should in fact be called the “Austin Biennial”, and leave the rest of the state of Texas to the claim of the original “Texas Biennial”, which started long before 2004-5 as HJ Bott pointed out.

Kudos to the glorious art world of Texas for not having a biennial for its very own artists. Kudos to the artists who made it happen. Im not sure about a “hodgepodge”, a little focus never hurt anyone worthy of wanting to see some smart art. Let Raney curate and direct the next biennial, im sure it would be perfect.