A Multinational Quilt of Uniform Patches, B.O., and Mustard

by Paula Newton May 15, 2013
FacebookTwitterEmail 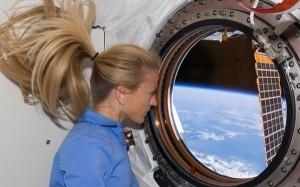 Karen Nyberg in space. Just think what zero gravity would do with a needle and thread. Photo: NASA

Most International Space Station missions last about six months, which means any sane astronaut needs a good thick novel, an effective mantra on which to meditate, or the love of a time-consuming hobby.

Karen Nyberg, the 50th woman in space, has outed herself as an avid quilter. “I enjoy sewing and quilting,” she explained during a televised interview from Moscow. When she goes back into space on May 28, she’s taking her hobby with her. “I am bringing some fabric with me, and thread. I’m hoping to create something. I don’t know what yet it will be—that’s part of creativity.”

In a recent Houston interview, it was suggested that she could incorporate old astronaut clothing into her quilt work (they wear their suits for a week and then throw them out, eventually to be jettisoned and burned up in Earth’s atmosphere). Nyberg excitedly replied: “Discarded clothing—fantastic idea!” And, although paints and dyes are forbidden on the space station, Nyberg pointed out that available ketchup, mustard and chili sauce may suffice.

Unmanned cargo capsules carrying supplies up to the space station have room for returning cargo to Earth. But unless the ISS falls into a time-bending black hole, quilt fans will have to wait until 2014: the first capsule, scheduled for early November, won’t quite make it back in time for the country’s largest quilt fair, Houston’s International Quilt Festival, which opens October 31.