by Betsy Lewis May 1, 2013
FacebookTwitterEmail 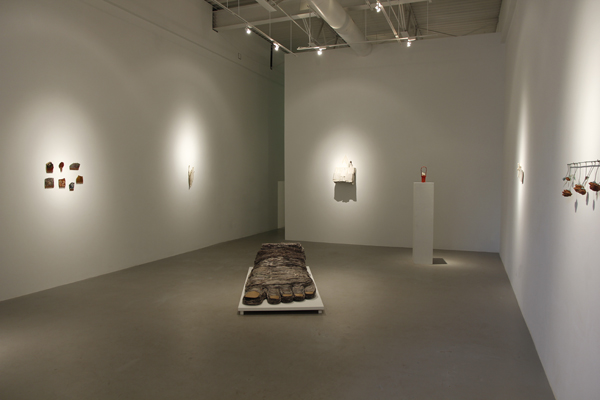 The only time I have had a transcendent experience through art was while visiting Rome—until now. motherf, an exhibition of new work by Celia Eberle of Ennis, Texas, concentrates uncommon power, beauty and reverence into the back space of Cris Worley Fine Arts. Rarely does life require a wildly dramatic sentiment like “transcendent” to give a description the proper fit. This is one of those times.

The show is just nine pieces. Six are wall-mounted; three are on pedestals. All are sculptures. Eberle’s approach casts Mother Nature as an abused woman. Were the work to suggest defeat, or an Octavio Paz-laced conquering, the exhibition would have had little, if any, power. But this art is fecund, jagged and evocative of ancient histories far removed from this little room on Slocum Street. I could feel its power immediately, confused by it, then spent more than an hour there, succumbing to each piece’s distinctive, eerie presence. 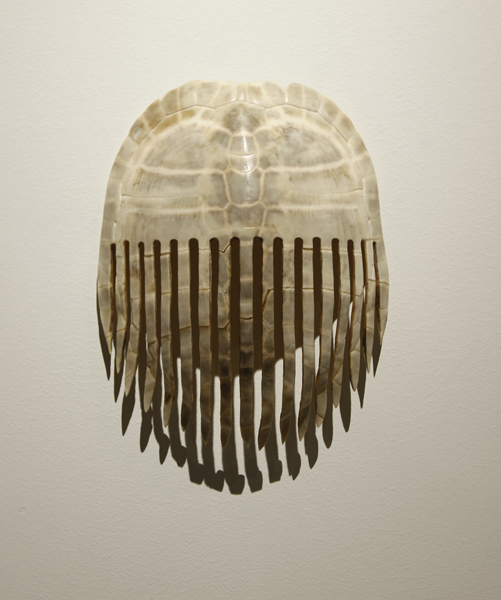 A turtle shell hangs from the wall, its top half is whole polished bone, glowing like an x-ray. The bottom half is carved into thin, long, straight teeth tapering at bottom, pointing to the floor, casting an aggressive shadow. Natural lines are interrupted and returned like a flickering lamp. (The turtle had died on Eberle’s property of natural causes, so she was legally able to use its shell.) 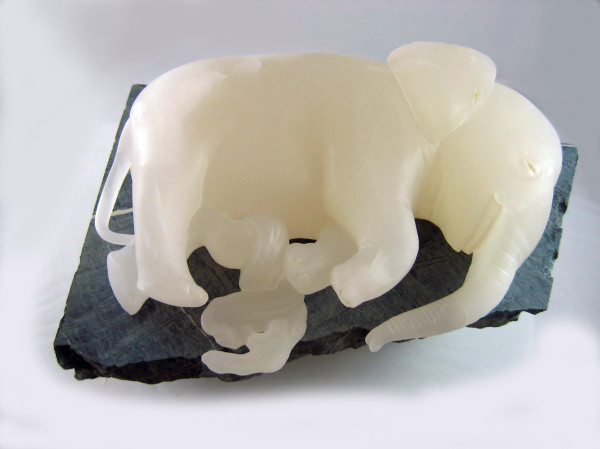 An alabaster elephant fetus glows against the green slab of marble on which it lies. It stirs maternal instincts that I’m certain I don’t actually have. It’s not clear whether it still has a chance for life or if that possibility is gone. There is a defined umbilical cord still attached. So why an elephant? An elephant is a gentle animal that can only thrive in a wild place. The fetus may be tiny, but the born elephant will grow to be huge. This plump little fetus has no sharpness, no edges. I want to protect her.

I spent an hour in this room before the relationship of these two pieces, Comb and Fetus, fully resonated. They are separated by a few feet. They are the only objects in the show that seem to glow. One is the protector; the other, the protected. I’m not a mom and never wanted to be—I could only have this response to a creature that will never engage in human society. And it had to be this creature, slow and gentle, and in time, big, then slaughtered. In this gallery, with the turtle shell nearby, the tiny one is safe and I can breathe. 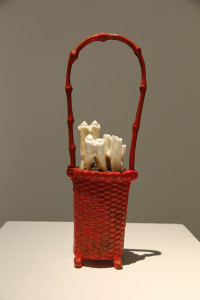 There are other connections throughout the show. Daggers and cutting are found in Comb‘s long tapers, Plenty‘s beaks, talons and verticality, Basket‘s planted teeth and Wither‘s faded leaves. Basket finds both cow teeth and human teeth “planted” in dirt. I Googled “planting teeth” after I left, certain there was meaning hidden there: In Greek mythology, dragon’s teeth, once planted, would grow into fully armed warriors. Hawthorne mentions them in regard to Pearl, Hester Prynne’s little daughter in “The Scarlet Letter”:

“She never created a friend, but seemed always to be sowing broadcast the dragon’s teeth, whence sprung a harvest of armed enemies, against whom she rushed to battle. It was inexpressibly sad—then what depth of sorrow to a mother, who felt in her own heart the cause!—to observe, in one so young, this constant recognition of an adverse world, and so fierce a training of the energies that were to make good her cause, in the contest that must ensue.” 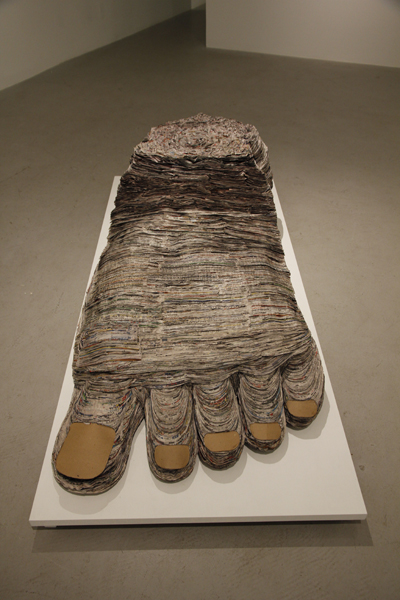 Barefoot and Pregnant is a huge foot in the center of the space, composed of layers and layers of newspaper with brown cardboard for toenails. It has no obvious reference to the feminine, yet the first association I made was of Grendel’s mother. It’s the size. It’s the stack flattening under its own weight. But this is a human foot because it’s made of human information that’s been discarded. It’s yesterday’s news. The shaping is elegant though, with graceful curvatures at the ankle and the toe knuckles (look at your toe knuckles; admire their grace). The shapes are born of the flattening of human experience stacking under a weight of days. Literally. At the top, where the work is severed from its imaginary leg, is a spiral of color, print and paper so delicate and thin it makes you nervous to breathe. It’s six feet long. 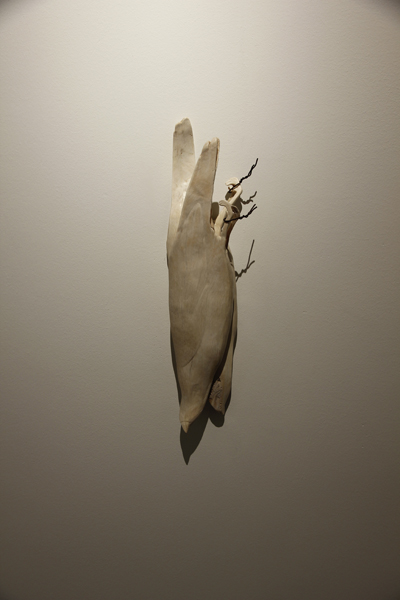 The human experience has a presence in the room only as much we are part of nature. The dominance and centricity of Barefoot and Pregnant is no accident, but humanity is neither the focal point nor even the strongest voice. Their formal commonalities are keys to deeper intimacies. The works have relationships to and with each other. Be still in the room and they will find you, too.

Celia Eberle: motherf runs through May 11 at Cris Worley Fine Arts in the Dallas Design District. A fine dog named Perry will show you around.

This blog is called “Don’t Look. Okay Look.” Betsy Lewis is a lover, a fighter, a freelance art writer.

A beautifully written review by Betsy Lewis, capturing an emotive aesthetic about this awesome naturalist exhibit.