It’s been a while. Many people have contacted me with the same question: “Doesn’t Laura Lark love me anymore?” To this I‘ve replied: “Laura Lark loves you as much as she ever did!”

And I really, really mean it. 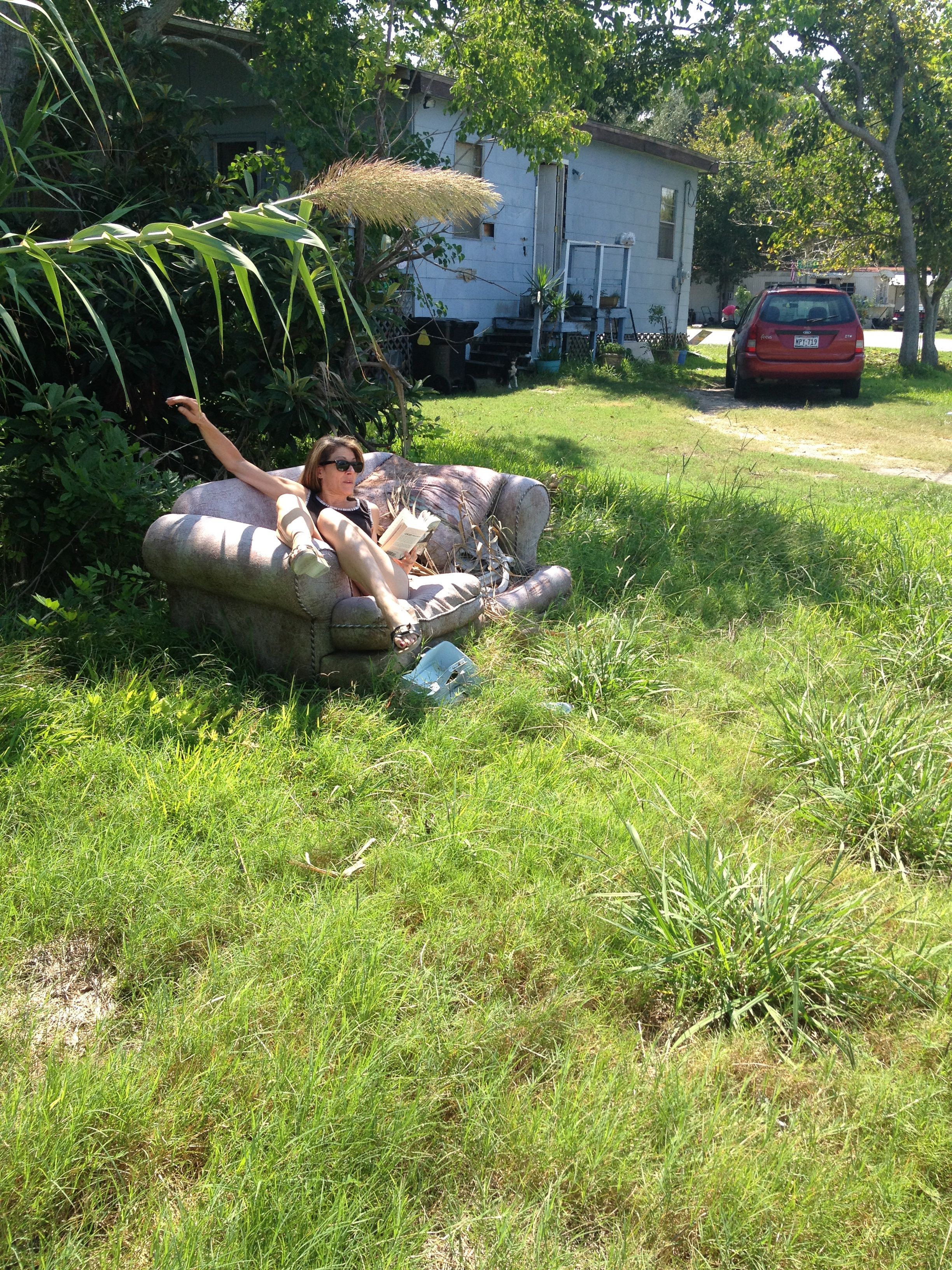 I’ve had a lot going on here at home. There’s dirt out there that has ground its way into collars and cuffs, and that shit doesn’t come out by itself. And honestly, I’ve had difficulty engaging with the art world lately and it just didn’t seem right to dole out advice if I couldn’t do it with the proper expertise and compassion that goes into all of the work I do.

Although I don’t have my usual pithiness regarding art world matters to offer readers, I have compiled my own cute list of 2012 faves. At first I felt kinda bad, because very few of them are art or art world related. But then I remembered that just about any idea that some spoon-fed asswipe dreams up and calls “Art” is accepted as Art, so hey! Fuck it.

Whatever the Emperor decides to pull out of his butt is fine with me, too. In fact, it makes things incredibly easy.

My Personal Favorite Sightings of 2012:

Facebook posts! Although my own experiences with Facebook have left me feeling as if I’ve left my drapes open, thereby allowing that weirdo across the street to see me in little more than my underpants, it sure hasn’t stopped me from becoming that creepy weirdo myself and living vicariously through friends, friends of friends and people I would never recognize if I met in person. So thanks to the following folks who’ve shared and made me proverbially LOL:

There’s always a special sale at Jos. A. Banks or wherever the fuck it is that Bill Willis works, and though I’ve little use for suits and ties and I can’t take advantage of the bargains galore, I sure am happy that total menswear immersion has driven this guy to share his sartorial expertise, wit and what is probably mind-numbing boredom through his wacky posts. 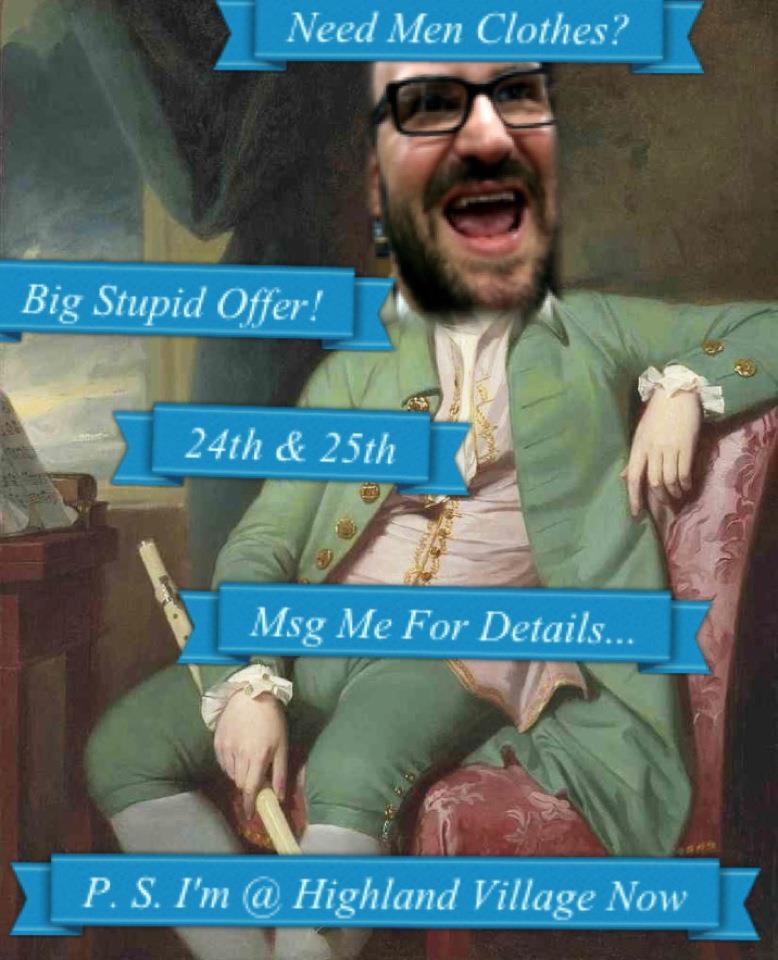 Thanks, Bill! You’ve given the phrase “All Pants Half Off!” the proper spin.

2. Amazon.com’s customer reviews for the Hutzler 571 Banana Slicer by “SW3K” and “Mrs. Toledo.”

I can only say, “Just read it.” I’m now a huge Mrs. Toledo fan—her other customer reviews are pretty good, too.

First, I’d like to say that I don’t know Michael Lassoff. At all. I was introduced to him briefly by a mutual friend, thought he was nice and went home and Facebook-friend-requested him. Best move ever! My love for his “sessy and we no it” series here may have something to do with the fact that I actually owned a white velour workout suit in 1976. It had a striped rainbow arc across the chest and butt. No matter! You folks keep your obsessions with Johnny Depp, Justin Bieber, Christian Bale, or whomever else is out there. I’ve got Michael Lassoff, *sigh*, and I’m clearly not ashamed to be creepy about it!

4. Other People’s Kids and Their Stuffed Animals.

I don’t have children, I don’t want them and quite frankly, I’m not crazy about having adult conversation interrupted by the ravings of some sugar-crazed grade-schooler. But I actually like kids, especially my friends’ kids, and I love knowing that I’m influencing them in a wholesome manner. A recent, bizarre shouting match on the street between a polyester-clad Hispanic woman in a beat-up Escalade and me reminded me of that “little pitchers have big ears” phrase. When I waved goodbye to 3-year-old Ella Hippenstiel and she waved back and gleefully shouted, “eat me!” I knew my life had purpose. May each and every one of you grow up healthy, happy and with a total potty-mouth. 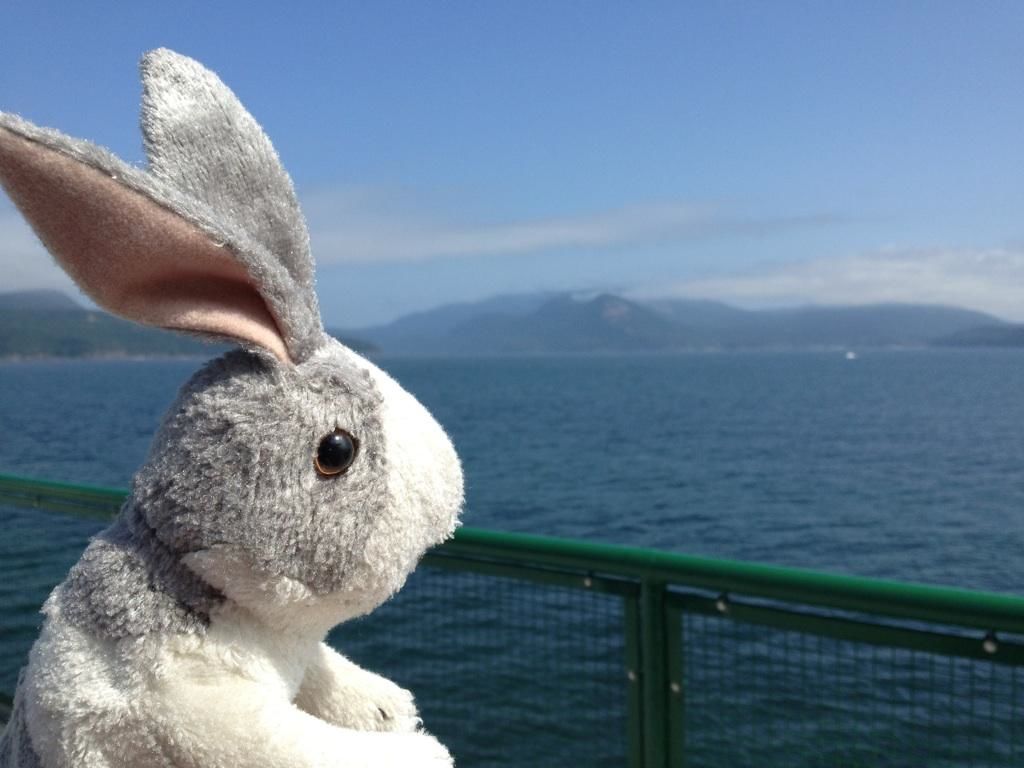 The real reason I love these things so much? Because I’m made aware that I’m not the only housebound nut out there with a keyboard and an axe to grind. Thank you, Real Actors, for wading through the muck and delivering these up in such a delightful form.

Whether he looks like a version of Ilie Nastase who just stomped off the court and got himself a haircut, or is standing around (for whatever mysterious reason) shirtless in front of a John Currin, this artist/curator/man about town cracked me up when I really needed a laugh. 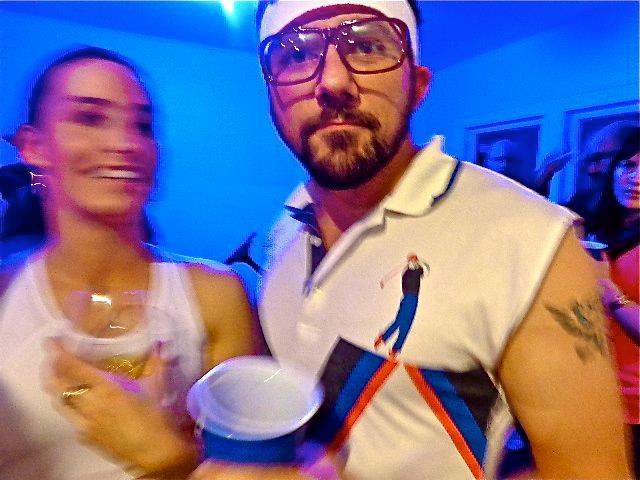 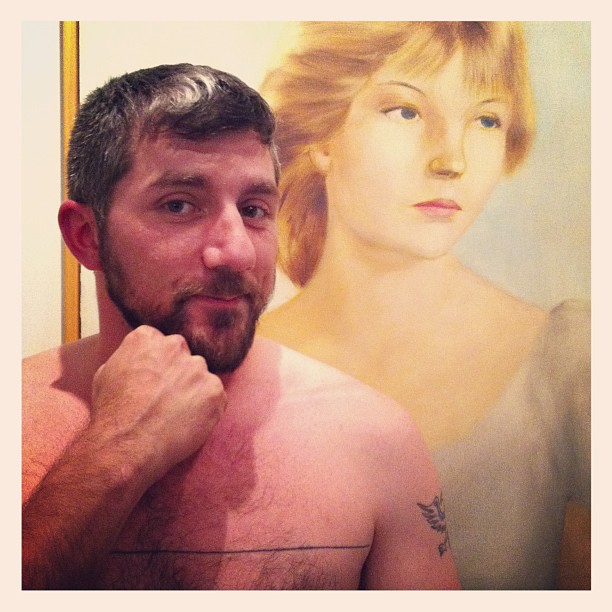 In a whirlwind road trip that really should have been invigorating and restorative, but instead wore me the hell out, I visited the Grand Canyon, Las Vegas and the Amargosa Opera House near Death Valley with an Israeli-born filmmaker and artist I barely knew. It taught me many things. Most of them I should have known already. But there’s a lotta stuff out there that I sneer at because it strikes me as commercial, tacky, earnest, or cornball. I think I’m too cool for it. When I blindly booked a room in Las Vegas through Hotwire and discovered we would be guests at Hard Rock Hotel, I was mortified. When we strode through the casino and I realized that not everyone in the world associates the words “Hard Rock” with “Schwarzenegger” or “douchebag,” I understood just how cynicism and a pride in irony can limit one’s perspective. It’s not every day you get to see Kurt Cobain’s coat! It’s not every day that you realize somebody might get excited by that! 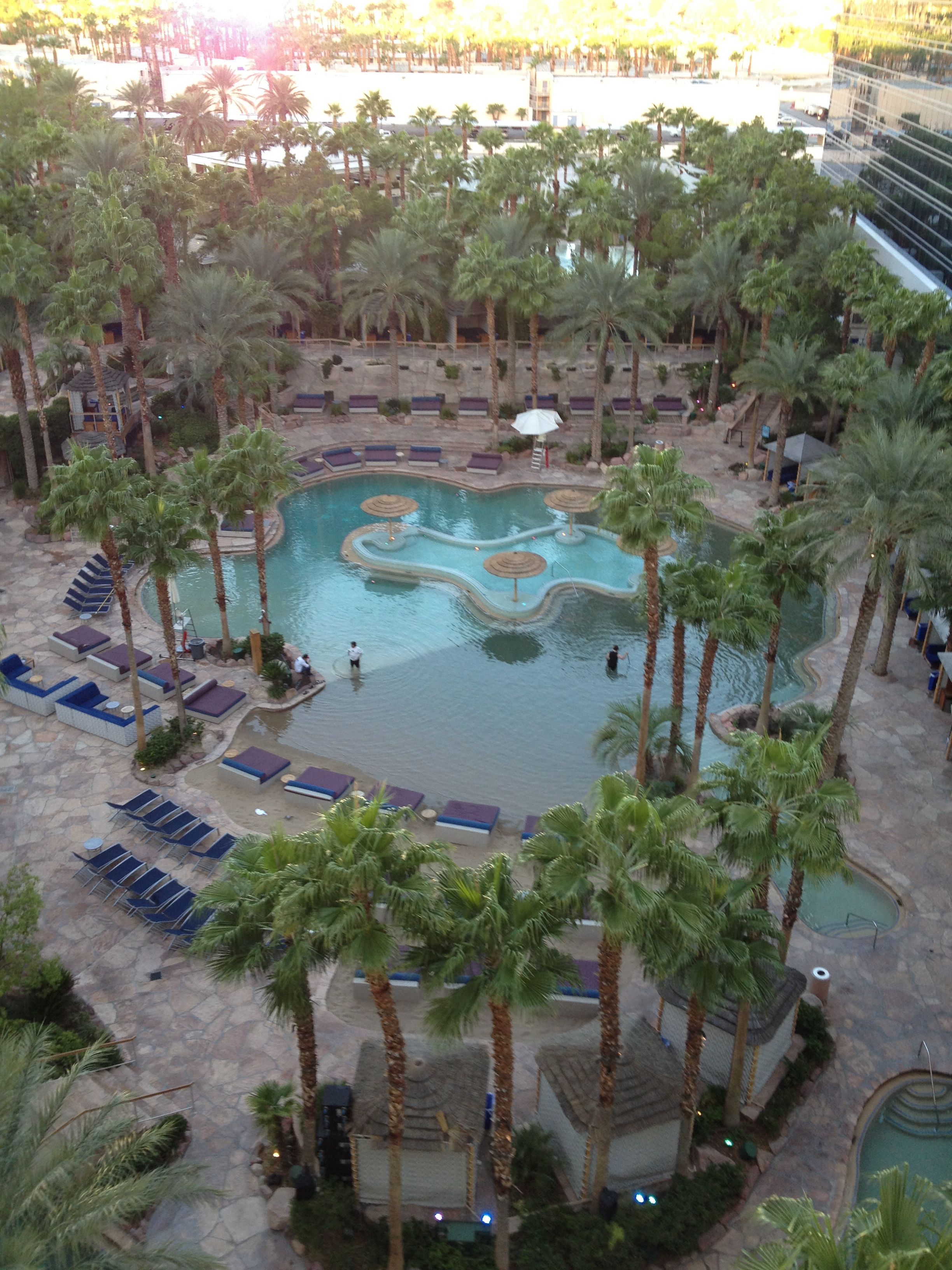 This place is truly sublime, and you’d be a bore and snob just like me if you didn’t think so.

The morning after I returned, which was, coincidentally, the start of early voting for the recent presidential election, I was stopped by a local news reporter who wanted to know if I would be voting early, and if I had anything to say to people about it. It could have been the majesty, grandeur and sublime beauty of the American West; it could have been that week of non-stop driving and no sleep. Whatever the cause, I wound up making a speech so patriotic, I’m surprised I wasn’t swept off by a marching band playing the national anthem. Thank goodness it was live, it was 6 a.m. and nobody saw it. I would have been horrified by my sincerity and enthusiasm. Because, uh, yeah…sincerity and enthusiasm and pride and passion are really dumb and should be avoided at all costs…

With that in mind, I’ll stop here. Too much appreciation for stuff out there might make me jaded. In reviewing this, I realize that I’ve omitted zillions of worthy posts and pix. I’m sorry I couldn’t include everybody who made me laugh hard enough to vomit through my nose. I also realize that my penchant for ’70s attire might just be annoying nostalgia. I’m sorry about that, too.

I figure that if you don’t like it, don’t read it. It’s a free country! And getting your own column is fun and easy and a great way to make a couple of bucks in your spare time! Anybody can do it! And it strikes me that every visual artist these days thinks that writing about art is really groovy. I’m not all that excited by the notion of artists-on-artists unless it’s a new porn fetish. I think what this trend really means is that I can’t get my writing published anywhere else, and that when artists and arts professionals are the majority of the people writing about art, it means they’re also the majority of people who actually give a shit about it. Which is just depressing. Filmmaker Joel Coen once said in an interview (and I’m paraphrasing) that if someone wasn’t making a movie for the purpose of entertainment, he didn’t know what the fuck they were doing it for…

So thank you, friends, friends of friends, Facebook friends and anyone else out there who actually entertained me in 2013. Perhaps none of it could be classified as Art. Maybe that’s why I found it so durned inner-restin’.

Incase you were wondering since the photo credit was missing….Photo by Timothy Gonzalez

Whether he looks like a version of Ilie Nastase who just stomped off the court and got himself a haircut, or is standing around (for whatever mysterious reason) shirtless in front of a John Currin, this artist/curator/man about town cracked me up when I really needed a laugh.

I am so glad you’re back!!! Please don’t wait so long for your next sightings.