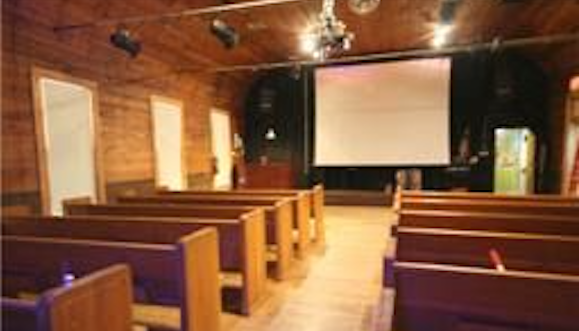 Houston’s 14 Pews is going up for sale in late February, reports the Houston Chronicle. Cressandra Thibodeaux has run the space since the summer of 2010, but will leave for Portland, Oregon to become the executive director of the Alberta Abbey, another church converted into an art/film/performance space.

14 Pews is the former home of the Aurora Picture Show at 800 Aurora Street in the Houston Heights, founded by Andrea Grover in 1998 before she left town for a curatorial position at the Parrish Art Museum in Southampton, NY, and later at the Guild Hall in East Hampton, NY. The Aurora still exists in its Rice/Kirby area location since 2012.

Zillow.com and Realtor.com have the home already listed, but at different estimated prices, both over $550,000. Zillow lists the space as “a single family home,” but Realtor makes reference to its art history (and has lots of photos). It will probably be springtime before we find out what will happen to this home of interesting cinema for the past 20 years.

Yes I want to buy it!

If I lived in Houston I would definitely be interested. Please someone, buy it and make it a killer art house and performance theater!