The exhibition lies in two explorations which converge in the space itself. The physical space acts as a metaphor for the process that an artist goes through while projecting themselves and their work into the art world, and in this case, both a live space and a studio space.

Keep in mind, this is the artist’s MFA thesis show. From there, the daily performances, or “rituals” as I think of them, live in documentation via Facebook, a medium that Jimmy has long been interested in as a tool for a curated reality.  The title IRL (In Real Life) comes from the gaming world, and describes things happening as they are in the current reality. That title, integrated with the curated, Facebook reality, indeed provides the performance/exhibition/ritual a multi-layered life situation. The connection between the reality of the artist as student really only lives in the fact that the UTSA Satellite space is an incubator for the University itself. Aside from this, the performances are strong, and grounded in the artist’s own identity, personal family history and his generosity in sharing that with an audience at all hours of the day. 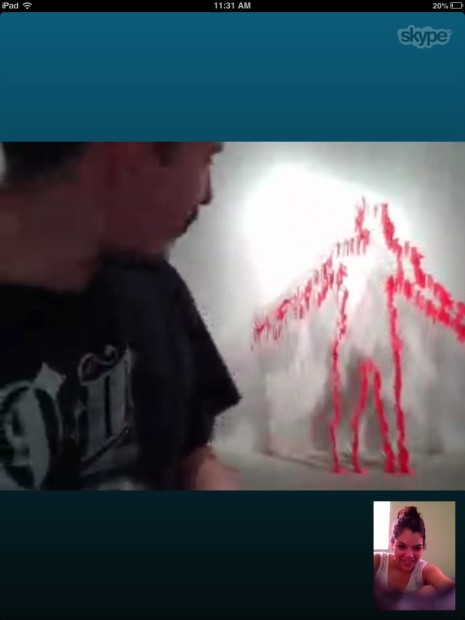 Skype chatting with the artist, friend number 11, for 24 friends in 24 hours

I saw the artist about mid-way through the project, and he was not only exhausted from the rigor of living in a non-living space, but also from the exhaustion that conducting a performance/ritual daily commands. But I was impressed by his energy, his vigor and the thoughtful way each of the daily performances were integrated in the two realities that he was creating. All the performance/rituals were incredibly well thought out, and integrated the artist’s interest in bridging the idea of created realities and the fabricated ritual of the artist’s life.

Among the performances was the creation of a monument to the artist using art materials which were placed in a mound in the middle of the space, then subsequently moved to a small storage room on day one. Day two involved a final crit where his grad school peers and professor spit wine onto his naked body. Day seven involved the artist searching for bluebonnets and eating one. Day 11 involved a picnic in the gallery on a blue tarp and serape made of duct tape, and so on until my participation on day 14, where the artist hung out with 24 friends in 24 hours. 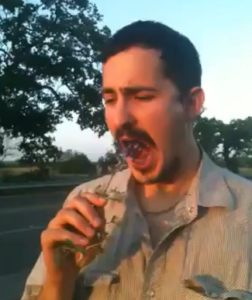 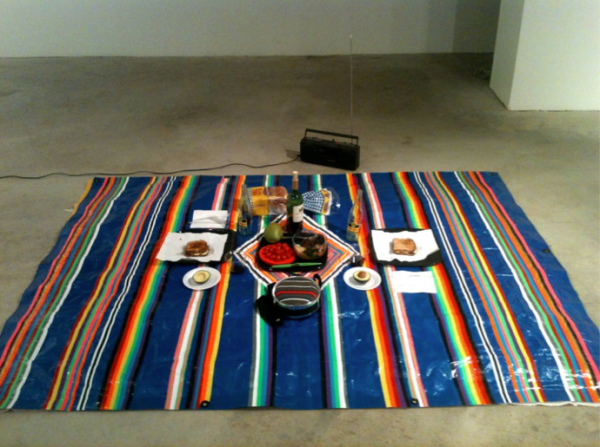 My favorite performance, however, was on day five. The artist pulled a collection of knives that had once belonged to his grandmother and covered his cowboy boots with them, creating “knife boots.” I was drawn to the tender nature of the ritual, the historical significance the dollar dance holds in Latino cultures, and the performance of drawing an audience from its comfort zone, forcing them to enter the performance as a participant rather than an observer, while activating the piece by rewarding the artist with a dollar for each dance. Yet the perfect touch in my eyes was the knife-covered cowboy boots the artist wore while inviting participants to dance with him. They are both beautiful and horrific. 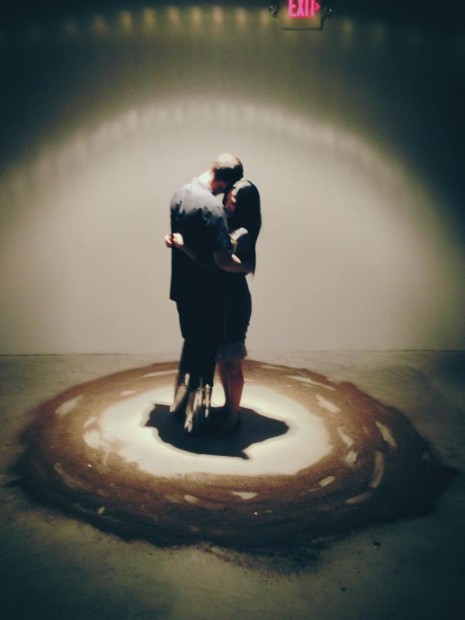 It was an ambitious effort, to say the least, and by following the effort on Facebook, Canales has actually involved more participation as each day goes on, whether realizing that was the intent or not. It was exactly the balance between art life and grad school life in the end, though the rigor of the performances could probably have been scaled back a bit to cut the artist some slack. In the end, Canales integrated so many people and so much support for the project that he reached that balance of real life and art life that he was looking for.