ZZzzzzzz by Nathaniel Donnett was the result of his one-week residency at Art League Houston as part of the group show/mini residency STACKS, curated by Robert Pruitt. On opening night for STACKS, the five participating artists—Phillip Pyle II, Nathaniel Donnett, Jamal Cyrus, M’kina Tapscott and Autumn Knight—were clad in gray hazmat suits while they inventoried, announced, axed and fed collected objects that their offerers felt represented “blackness” into a wood chipper. Each subsequent week one of these artists is invited to use the remnants in their own exhibition.

In a panel discussion for ZZzzzzzz, Pruitt framed STACKS as a way to make public and tangible the conversations he’d been having with his peers, as well as a way to defy the lack of expectation and exhibition of rigorous conceptual work and theory-based investigations by black artists, “to show that we talk about what they do not think we are thinking about.” When asked whether continuing to rehash and redefine “Black Art” only continues black artists’ confinement to an expected loop, Pruitt said it is the conversation that matters. 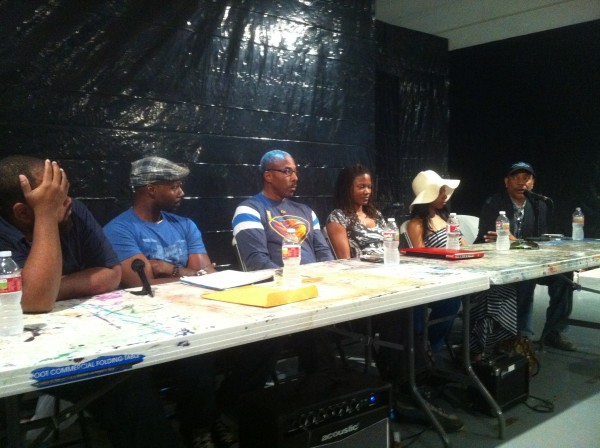 On that note, I’d like to point out that the talk for ZZzzzzzz was rare in two ways: 1. It was a participatory performance work that asked to hear about the participants’ experiences. 2. It was a panel discussion that actually included discussion. 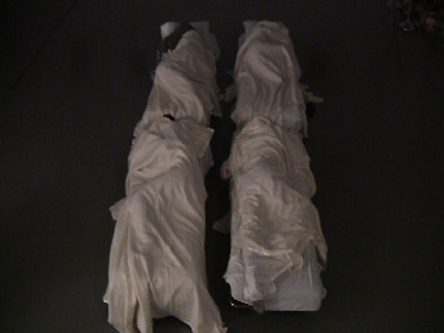 Nathaniel Donnett was the second STACKS artist to have his go. His first choice of medium was time travel, but barring that, dreams were the next best thing.

Inspired by Carl Jung’s writing and his St. Elizabeth experiment (to determine if African Americans had a different consciousness than white Americans), Donnett led a week chock full of investigations around the idea of “Black Imagination.” It started with inviting four people, two artists and two collectors, to spend the night in the gallery space. They slept, attempted to sleep, or cursed Donnett for sleep deprivation to a soundtrack he created from lectures, found sounds and music. “Donnie Darko” also played. 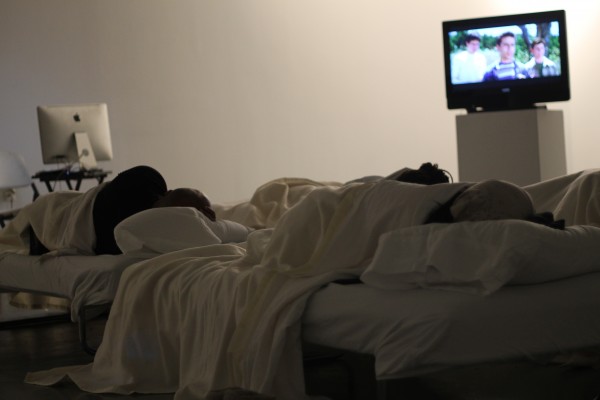 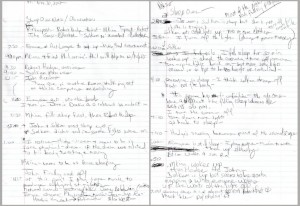 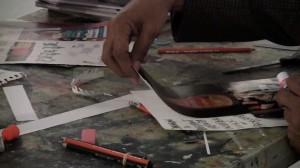 The next morning, each of the sleep subjects had an individual session with a psychologist. It began with dream interpretation and ended with free association cued by the aforementioned wood chipped remnants. Later in the week the sleepers attended a class in which they drew and collaged images in response to the “stimuli” of the space, the commodity debris and the soundtrack. The psychologist’s intake interview, video of the session and resulting art works were displayed.

The four beds lay in the middle of the room, and on the far wall a video of of the sleepers was projected onto a large mattress pad. Projected onto a child-size mattress near the floor was the video Lucid. In it, “The Black Imaginal” (a creation/character played by Donnett that combines “fantasy, dream, trickster, masks and the black imagination”) strolls through downtown Houston. His face is covered in long hair and a black unicorn’s horn projects from his forehead. As he walks, he designates objects and sites with signs that say “Black Art.” The footage is cut with images from art history, reposed and rephotographed by Donnett, which flash on screen. 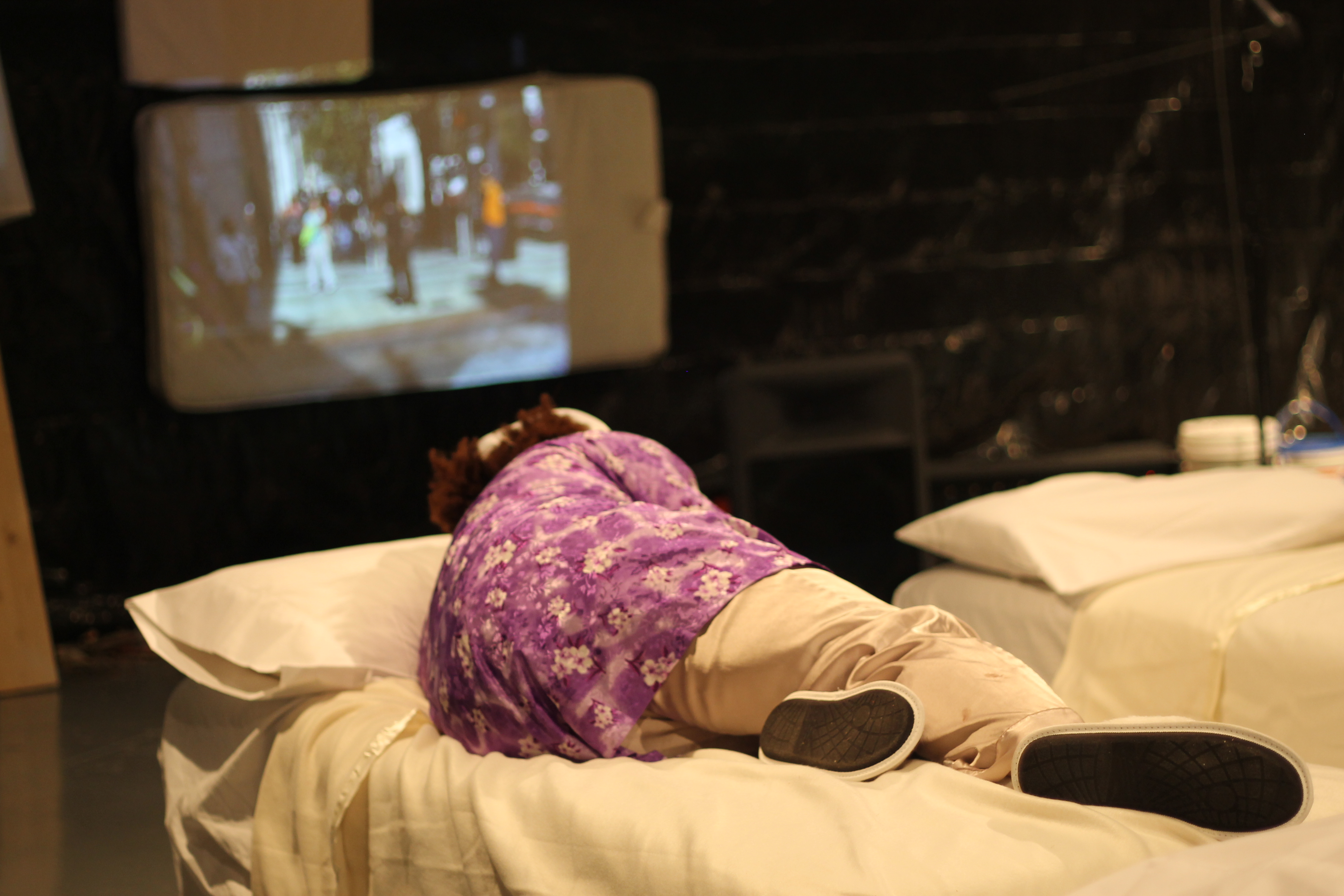 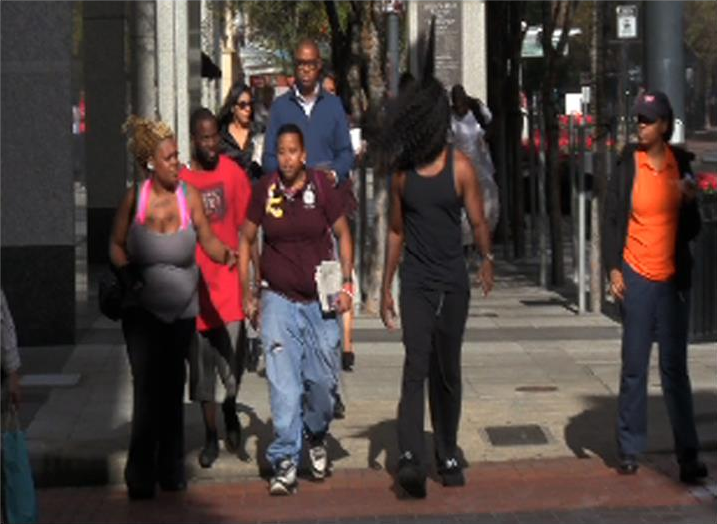 In The Visitor,  a Friday night performance during ZZzzzzzz, Nathaniel Donnett, playing the Black Imaginal, and Tyres Donnett, playing a sort of “sleep watcher,” performed a ritual-like asleep/awake duet. Tyres compulsively straightened the sheets, tucked in corners and laid down to rest. When she slept, Donnett awoke. In black slacks and a blue and green plaid vest, this liminal being pushed himself up from a mattress in the corner of the gallery toward a white paper stage, its corners held in place by the books Man and His Symbols, Inner Work: Using Dreams and Active Imagination for Personal Growth, The Science of the Dogon: Decoding the African Mystery Tradition and Bloodline.

Donnett circled the paper, sprinkling it with graphite and grape Kool-Aid. He stepped onto the stage and stepped again, rhythmically bouncing the Kool-Aid smell and graphite dust through the air. As he tapped, my eye was drawn back to the video Lucid projected on the small mattress. It was as if his dream was projected while his sleepwalking body moved in place. A mic fed into an amp transmiting reverb, the patter of Donnett’s feet and the sound of the powders shaking against paper.

After each journey/dream/dance/song, Donnett returned to his bed, his feet spreading a gray dust on the mattress in fitful patterns. Once he rested, she started. She repeatedly straightened sheets, keeping order, supporting the support of the bed. It wasn’t as if she was waiting, exactly, but it was as though she was on-guard. They see-sawed back and forth, attached  like puppets by strings to one another. 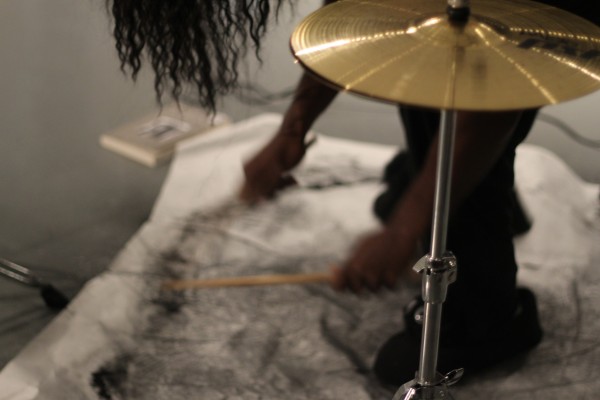 Each time this sandman rose from his mattress, he replaced his drawing materials, his pace quicker, the powders further suspended in the air, Kool-Aid scent thicker and the stage and mattress more streaked with footsteps. By the third time, the Imaginal was thwacking the ground with his drumstick, rattling his feet against paper and powder and banging cymbals in a frantically escalating rhythm.

The sleep watcher started awake, the sleep walker hung his dance-drawn creation on the wall, and it was over.

I was sitting down on the far side of the Black Imaginal, with Tyres in my foreground, so any of his motions I saw through her. This view showed him as the creation of her dream, or her as the enabler of his dreaming. His wandering depended on her watch. I’ve heard less positive and more confused responses from people at other vantage points around the room. I think it is a question of refining the staging, lighting and space. The elements are there, though. As an artist concerned with process, Donnett’s performance divulged this drawing’s creation in real time. 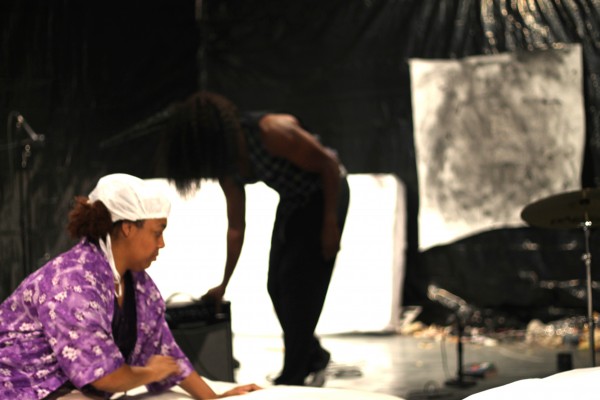 Donnett’s week at STACKS was crowded with considerations of the relationship between artist and collector and the roles that educational and arts institutions play. But most compelling to me was the idea of a dream as a new kind of space that doesn’t have to be dictated by old conversations. Donnett’s use of mattresses alternatively as a substrate, stage, canvas and shared shell was a fresh turn for me. I’m an extremely active dreamer, so I give credence to the idea that our dreaming lives are the rooting of and rehearsal for our waking pursuits. 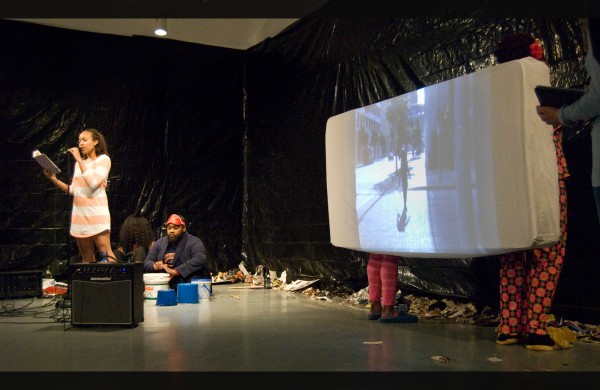 The Last Stage of Sleep by Nathaniel Donnett, photo by Lillie Monstrum

As Donnett points out, one evolutionary explanation for dreaming is that our dreams allow us to understand and anticipate waking experiences. Like a flight simulator prepares pilots, if we play out running from a predator, or tricking a trap, or finding a resource in our dreams where danger is not real, we can face fear and arrive at new solutions in our waking life. In this vein, dream time is for trying on the trickster mindset. How can we reimagine familiar intersections in ways unobvious or absurd? How can we catalyze new motion in an ossified joint?

At the talk for ZZzzzzzz , panelist and Houston Museum of African-American Culture director John Guess asked what happens when your recurring dream solidifies your expectations over and over again into familiar forms? How do you have a new dream that is a challenge for greater imagination?

I’ll leave that up to Gary Reece’s ongoing coverage of STACKS on “Not That This,” a soon-to-debut post by Autumn Knight and Regina Agu and the resonant mystery of the cycles that played out in Donnett’s performances. The brief introductions made in ZZzzzzzz to the ideas of “mutual dreaming” and the vacillating dependencies between artist and collector, analyst and subject, creator and sustainer are ripe to be explored. From what Donnett managed to dream up in one week and the action at STACKS so far, I’m expecting to see much more.