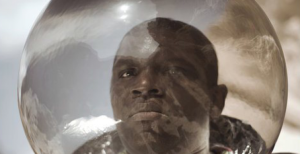 So, what is Afrofuturism? The term was coined twenty years ago, but it’s been getting tossed around quite a bit lately, especially in the national press’ current adoration of Robert Pruitt’s show at the Studio Museum. (The latest review is in yesterday’s New York Times!) Wikipedia says that Afrofuturism “addresses themes and concerns of the African Diaspora through a technoculture and science fiction lens.” If you know Sun-Ra, Basquiat, Pruitt, or Nick Cave’s Soundsuits, you’re onto the general theme.

To find out more, head out to the Art League Houston. They have partnered with Our Image Film and Arts Organization to present Black Radical Imagination, a showcase of video art, experimental film, and narrative shorts by seven international emerging black artists. There will be a screening tonight at 7 pm, followed by Q&A with the artists, and then some DJ time. Tomorrow at 1 pm, there will be a panel discussion with the artists, moderated by Robert Pruitt himself.