Prince Varughese Thomas: The Space Between Grief and Morning 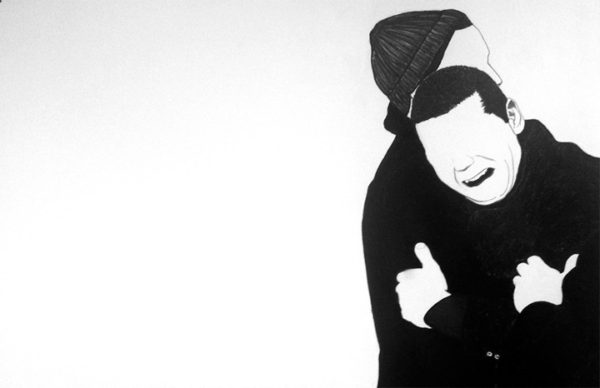 In an interview with Art League Houston, Prince Thomas describes how his exhibition came to be: He was processing the grief of his father’s death after having been his primary caregiver for more than ten years. He pointed out that his wife observed that after his father’s death, she had not seen him cry, or really even emote for that matter. His current exhibition at Art League in Houston titled The Space Between Grief and Morning echoes the vacillation between release and restraint inherent in the experience of grief, and the sense of both empathy and detachment as we encounter the grief of others.

But more so than being a meditation on death and grief as Thomas asserts, I believe the works in this show (all 2017) are actually doing something different, which is to provide a kind of meta-critical analysis of how we consume, deny, shoulder, and become fatigued by empathy—particularly by how it is mediated in our personal, public, and technological experiences. 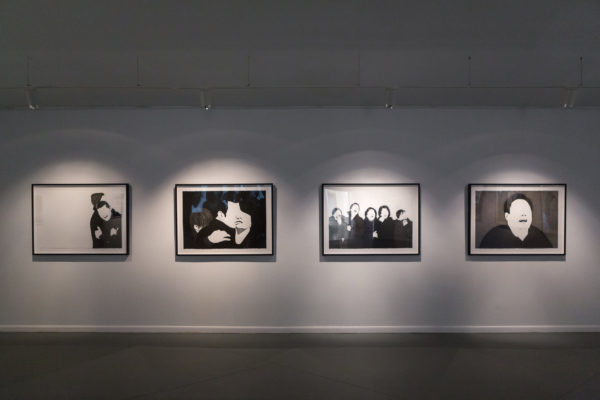 What constitutes most of The Space Between Grief and Morning are a series of charcoal drawings Thomas rendered from news reports of terrorist attacks, deaths of political leaders, and natural disasters. These are pared-down drawings, giving us just enough detail for these images to remain familiar and evocative. (I find Thomas’ depiction of the Orlando Massacre in Orlando, Florida: June 12, 2016 particularly painful.) But in their high black-and-white contrast, these drawings also clearly play off the vocabulary of Robert Longo’s Men in the Cities (1979) series, which is both useful and distracting. 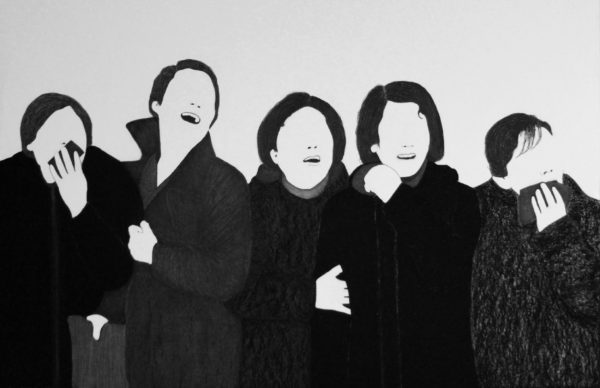 It’s jarring to consider Thomas’ sober drawings in tandem with the swanky, iconic ‘80s-era drawings, and still regard Thomas’ ones with the reverence they are asking from us. However, if we can momentarily sidestep the nostalgic Pictures Generation quicksand, we can glean and apply important information to Thomas’ work. Much like Longo’s figures exert an uncertainty between dancing and dying, Thomas enacts uncertainty between intimate pathos and distance by redacting details such as the background, and also arguably the most expressive part of a person’s face: the eyes. We can feel the simultaneity of empathy and apathy as we observe these horrors from afar: the sharp black of gaping mouths pierced like bullet holes, and the lack of detail rendering these poor people with the cold fatigue of an instruction manual.

Less art-historically shackled, Mourners is the most poignant example of this duality at play in this show. The two-channel video (presented as a single channel) shows a group of people mourning an unspecified loss on the right side, while on the left a chorus interprets said loss via an original composition by Nick Rissman. We’re  compelled to cry along with the mourners as they collectively fall apart in front of our eyes, and then we stop short when we find out they are actors—professional mourners there to populate sparsely-attended funerals. Thomas wants us to feel inextricably connected to their pain, and he wants us to feel slighted as we discover it’s a put on.

But what takes this piece beyond a simple duality is how these people act, and more specifically how they interact with one another. As a kind of crying chorus, they build an emotive crescendo, and as the scene plays out, actors instinctively pair off, and on-screen chemistries emerge. The lead actor—the woman front-center with the black t-shirt—starts heaving in despair as the woman behind gently places her hand on her shoulder, and we can’t help but wonder: how much of this is really just acting? Mourners richly intertwines fakery and genuine human connection. We also wonder as the woman in the top left clasps her arm around the chest of the woman in front of her: is this just good acting, or is it a manifestation of—in real terms—the fundamental human need to be held?

The Space Between Grief and Morning, when it isn’t chasing the ghosts of its art-historical predecessors, meditates on the idea of meditating on grief in a novel and compelling way. As our news feeds are increasingly bombarded with horrific news of an attack here or a disaster there, what is perhaps more horrific is our increasing immunity to it all. To what degree do we exercise concern, or wall ourselves off in defense? This is a question that Prince Thomas, in his work, carefully considers.

‘The Space Between Grief and Morning’ is on view at Art League Houston through May 6, 2017.