“Robert Pruitt: This Rejection of the Conqueror” at the Art Museum of Southeast Texas 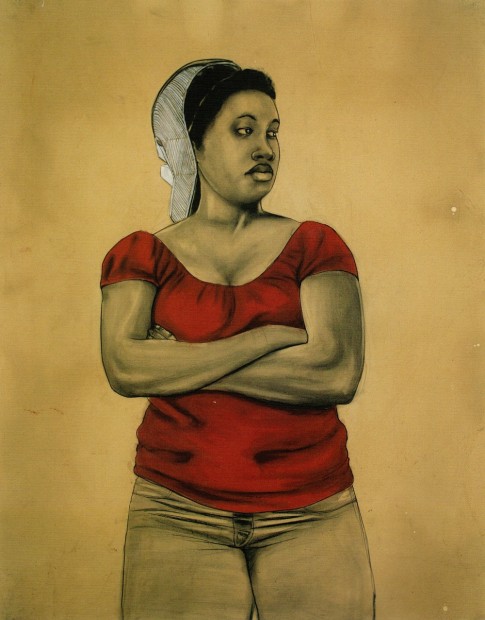 W.E.B. Du Bois created the term “double consciousness” in 1897 to describe the way African Americans split themselves into two personas, one for each side of the color line. The persona that existed in the white world was subservient and informed by the images and stereotypes of racism. Du Bois saw this doubling as a way that black people participated in their own oppression. African Americans’ psyches were harmed by being forced into two halves. The goal was then to achieve a unified consciousness. Artist Robert Pruitt references the idea of double consciousness in his work, a selection of which is currently on view in This Rejection of the Conqueror at the Art Museum of Southeast Texas.

Pruitt broadens this idea in works which depict African American people as simultaneously African and American. His subjects wear clothes that combine everyday African American fashions with African masks, for example. This doubling is most explicit in Janus, where Pruitt has drawn a figure who is wearing a mask on the back of her head. Like her Roman namesake, this Janus has two faces, looking forward and backward at the same time. The African mask is looking back, perhaps at the figure’s ancestry and history. The face that we see (looking off to the side) appears bored or wary. Her crossed arms accentuate this. Janus was the god of beginnings and transitions, and the beginning is easy enough to see, but the transition to where remains in question.

In Mama, the doubling appears as two representations of faces on the figure. Her real face is covered (with a t-shirt that reads “seniors,” giving us a possible clue to the age of this mama). She is wearing a an African crown that incorporates a face, and a t-shirt that has the figure of a woman with a large afro. Surrounded by gold leaf, the woman on the t-shirt reads as an icon-like Madonna; the image is an homage to 1969 Barkley Hendricks painting Lawdy Mama. (Correction: I misread the letters on the shirt covering the figure’s head. It’s actually “Sankore,” not “Seniors.” Sankore was a university founded in Timbuktu, Mali in the 15th century, making it one of the earliest universities.  Knowing this changes the work substantially–Sankore is a key place in African intellectual history. Given this, the entire piece could be seen as Pruitt addressing his own intellectual and artistic ancestors, Mama as his intellectual mother.) 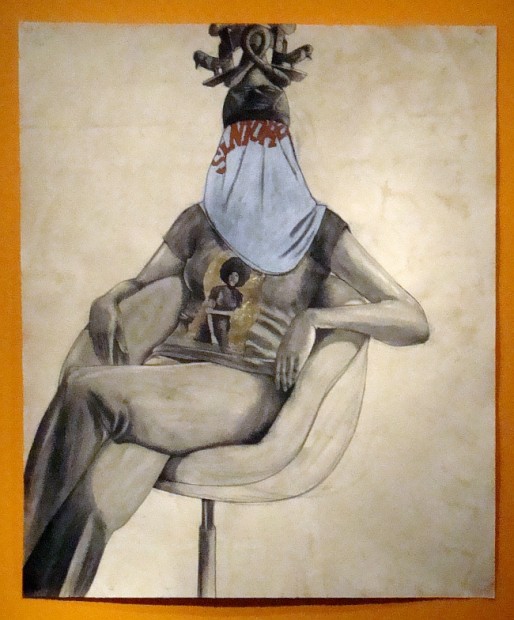 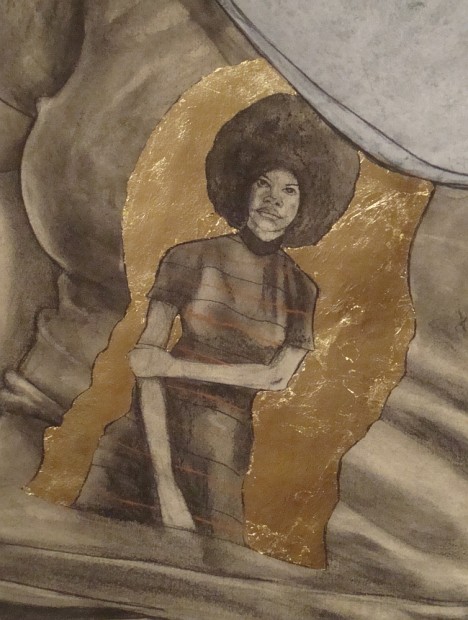 Pruitt used all the space he had available to him in the museum to turn one of his drawings, Oba, into the center of an installation. “Oba” is a West African term for a king, and Pruitt’s Oba is posed regally with one arm raised, wearing a crown (a miniature radio tower) and necklaces (a calculator, a small parabolic dish and various pieces of electronic equipment). 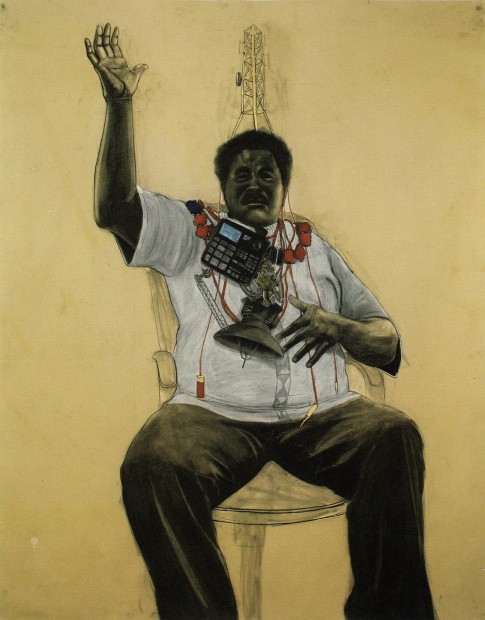 Pruitt has taken advantage of the relatively narrow gallery (off the main gallery) to create a throne room for Oba. 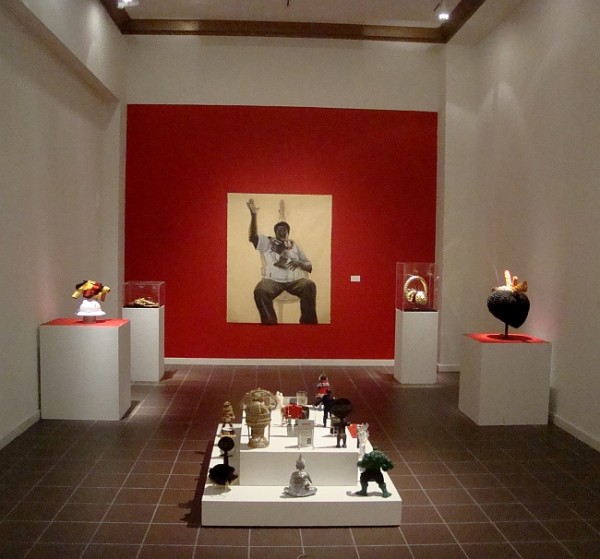 The oba is surrounded by meaningful objects, as well as another aspect of double consciousness—many of the objects in the throne room refer to “nerd culture,” a running theme in Pruitt’s art. He may be an African American man, a black nationalist, an artist, etc. But he’s also a geek. A nerd. A fanboy.

Being a geek these days actually seems to border on cool. At the very least, geeks are a desirable market segment. When I was a teenager, being a nerd was really a matter of holding yourself apart. A comics geek or fanboy also had double-consciousness. He (and it used to be an almost 100% male subculture) was oppressed by more macho males, ignored by desirable females and generally treated with contempt by society. The geek participated in his own oppression by accepting the judgment of the non-geek world; by being a punching bag, both figuratively and literally. This was acceptable in a way, because when geeks got together, they felt powerful. They were smart and creative. The geeky young filmmakers in Super 8 were like the bluesmen of the early 1900s—each creating art exclusively for their own communities. I don’t want to trivialize the black experience that Du Bois diagnosed by suggesting that the experiences of geeks, nerds and fanboys was equally bad, but rather to note the ways they are analogous and to suggest why Pruitt might want to include references to geek culture in his work. 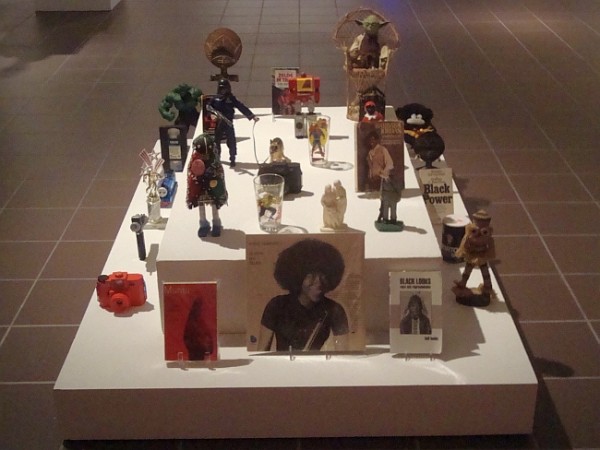 The objects set forth before the oba include symbols of African American political life, such as books on Black Power and a biography of Barbara Jordan.  They also include symbols 0f fandom, such as a Star Trek phaser, a figure of Yoda from Star Wars and a Hulk figurine. Pruitt appears to be setting them up as equivalent. 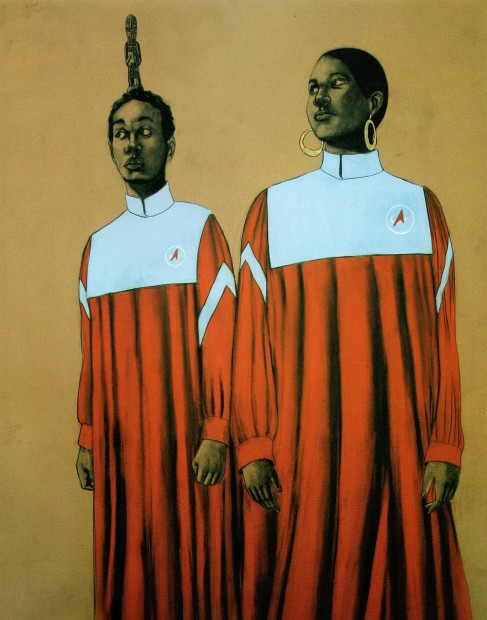 The two women in Two Sistas wear choir robes with a symbol on their chests—it is, in fact, the logo of Roscosmos, the Russian Federal Space Agency. But you would be forgiven for mistaking it for the emblems worn on the chest by the crew of the Enterprise on Star Trek. The figure on the left also has an African statuette on her head (hair and head-gear are always important in Pruitt’s drawings). If achieving a unified consciousness is the goal, then these two sistas embody it. That goal—a single, strong consciousness—is  Pruitt’s subject in these pictures. 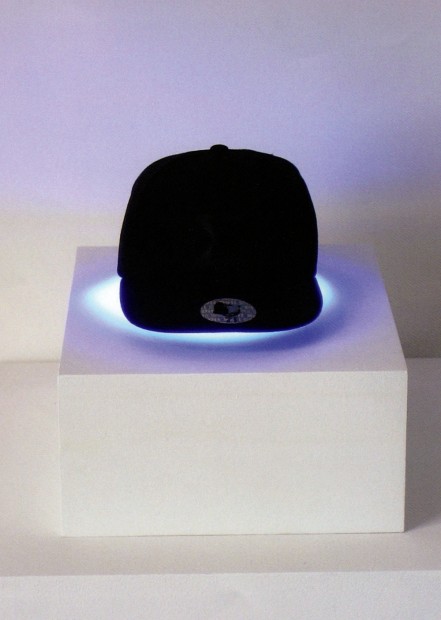 In addition to his drawings, the show includes a number of sculptural objects, most of which are made out of clothing. Clothing is an important aspect of the work—what Pruitt’s subjects wear is key to what they represent. (Given this, it is hard to imagine him drawing nudes.) His clothing sculptures take clothing often (but not exclusively) associated with young African American men—caps (such as the glowing Thinking Cap), white t-shirts, colorful shoe-laces. I see them as Pruitt taking another run at the personas we take on, for which clothes and fashion are crucial.

Downtown Beaumont on a Saturday afternoon is a ghost town. Parking is plentiful, crowds at the Art Museum of the Southeast sparse. It would be a shame if this exhibit, by one of Houston’s best, were seen only by local school groups. It’s less than two hours away from Houston, depending on traffic. And after you’ve looked at Robert Pruitt’s art, you can cross the border (remembering to pay silent homage to Janus, that god of transitions) and bet on the horses at Delta Downs.

This Rejection of the Conqueror: Works by Robert Pruitt
Art Museum of Southeast Texas
January 21 through April 8, 2012

Robert Boyd was born in 1963. He studied art and art history at Rice University. He is the editor and chief writer of The Great God Pan Is Dead.

EXU on Sale for Half Price!

This is a terrible review.

The T-shirt worn on the face of “Mama” actually reads “Sankore” (not Senior) and is in reference to Madrassa – The University.

[…] work of Artpace alum Robert Pruitt (HSR 04.4 and IAIR 07.1) is the subject of this week’s Glasstire cover story detailing “Robert Pruitt: This Rejection of the Conqueror” at Beaumont’s Art […]

[…] work of Artpace alum Robert Pruitt (HSR 04.4 and IAIR 07.1) is the subject of this week’s Glasstire cover story, detailing This Rejection of the Conquerer: Works by Robert Pruitt at Beaumont’s Art Museum of […]

Robert Pruitt is part of the Oxford American’s 100 Under 100 New Superstars of Southern Art. His work appears in the latest issue, on newsstands now: http://www.oxfordamerican.org/articles/issues/latest_issue/