THIS IS THE REVOLUTION: K-Pop in Diane Severin Nguyen’s “IF REVOLUTION IS A SICKNESS” 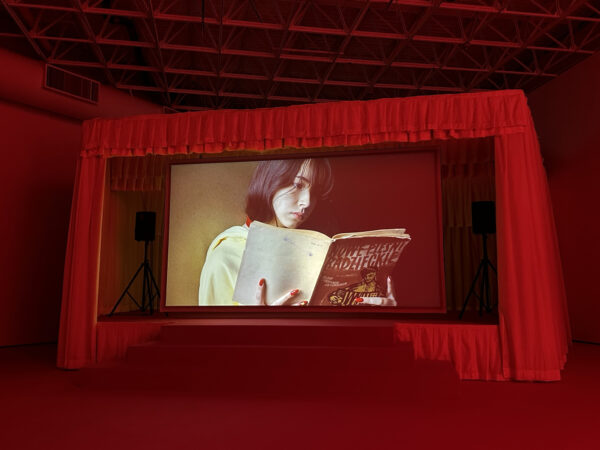 Diane Severin Nguyen’s video installation IF REVOLUTION IS A SICKNESS blends introspective filmmaking and revolutionary narration with a full-length original K-Pop song and choreography, using the music as a means of exploring the complicated relationship between East and West. Nguyen chose to set the film in Poland due to the complicated social dynamics in the country borne from having migrant communities from both North and South Vietnam, and the large K-Pop fan community in Warsaw.

The film follows the story of Weronika Nguyen, an orphaned half-Polish and half-Vietnamese child, through three phases of birth/infancy, childhood, and adolescence. The first phase features a man delivering revolutionary narration in Polish while child Weronika explores a desolate landscape, alone. The loneliness is suffocating until young Weronika finds music, at which point she begins to practice singing and dancing as if it is the only thing keeping her alive. As she morphs into teenage Weronika — a real biracial Polish-Vietnamese individual Nguyen found on Instagram — the landscape becomes urban, industrialized, and increasingly Stalinist.

The narration is picked up by a Vietnamese woman, urging Weronika not to fall prey to the temptations of the capitalist city (represented by a sequined gold cap that seems to simultaneously taunt and motivate Weronika as she holds it in her manicured hands). She continues to practice singing and dancing in eerie concrete structures, calling to mind the isolating trainee system used in the K-Pop industry: management companies audition prospective talent and provide food, housing, education, and singing/dancing instruction to the accepted “trainees,” who they routinely expect to drop out of school to focus on the industry. Some children are as young as nine when they begin their K-Pop training, with their promised “debuts” five to ten years in the future. Only a minority of prospective idols make it that far, however. 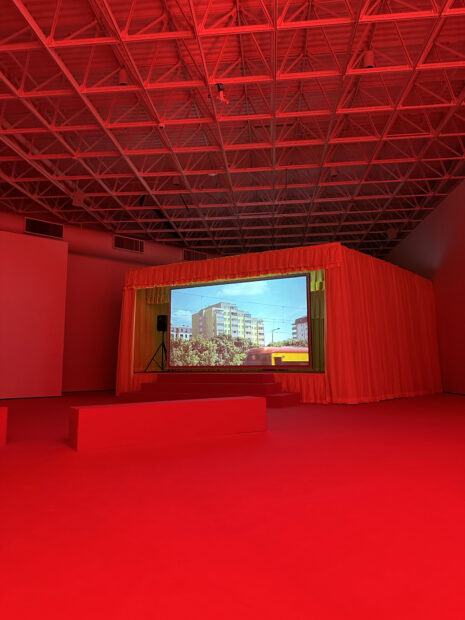 The penultimate phase of Nguyen’s film draws a direct parallel with this system. Weronika is now surrounded by a group of trainees — others similarly motivated by music. Nguyen has the group explore both the bleak landscape and contradictory cityscape, creating a sense of community for Weronika, as together they conquer the locations of her past. The group of dancers train with military precision, like they are set to go into battle — as if they are guerilla fighters. Their battle is, of course, K-Pop.

In the past few years, K-Pop has become a global phenomenon. Since PSY’s viral hit “Gangnam Style,” Korean pop music has entered the international mainstream slowly but surely, before exploding with the arrival of industry giants BTS and Blackpink. The latter, a four-piece girl group dubbed “the biggest girl group in the world” (and named Time’s 2022 Entertainers of the Year), currently holds the record for the most viewed music video from a Korean act, with DDU-DU-DDU-DU sitting at a hefty 1.9 billion views. 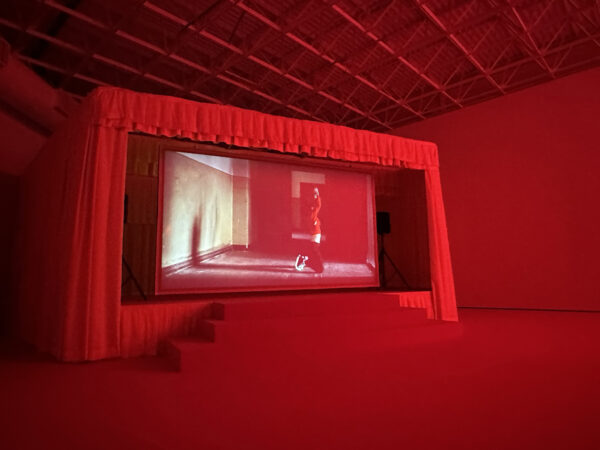 For a globally successful music act, Blackpink has a surprisingly limited discography. When they do release new music, the content is overwhelmingly hypercapitalist. Their lyrics promote a live fast die young mentality, detail how skinny the members are, and describe the ultra-wealthy lifestyle of the members. At the center of Blackpink’s success is the catchy slogan: “BLACKPINK IN YOUR AREA.” It exemplifies Blackpink’s advertising strategy: anyone anywhere can be like Blackpink and participate in the moment. Blackpink’s 2018 song “Forever Young” proudly proclaims: “BLACKPINK IS THE REVOLUTION.”

This “revolution” has erupted worldwide, uniting pop fans from all over the globe. Online forums allow people from completely different hemispheres to gush about the Blackpink members, while some fans take it further and meet up in person, forming friendships, dance troupes, or fanclubs. In a post-social media age, the commodities one enjoys have become status and personality signifiers. K-Pop as a commodity has served as a scaffolding for both real and virtual communities — however, what does it mean when the foundation of an interpersonal relationship is a capitalist commodity, and why did Nguyen choose this as the center of her piece?

The climactic final sequence of the film is a full-length original K-Pop song with choreography, developed in collaboration with Majesty Dance Team, a K-Pop fan community based in Warsaw. The lyrics, in English, are various revolutionary cries, illustrating pleas of the forgotten worker and advocating for collectivism. Majesty Dance Team created original choreography for the film, which draws heavily from K-Pop choreography, particularly that of Blackpink. The dancers bend the industrial landscape to their whim, making the statement that their community is strong, dynamic, and revolutionary, especially in the almost verbatim Blackpink-style cry that repeats itself throughout the song: “THIS IS THE REVOLUTION.” 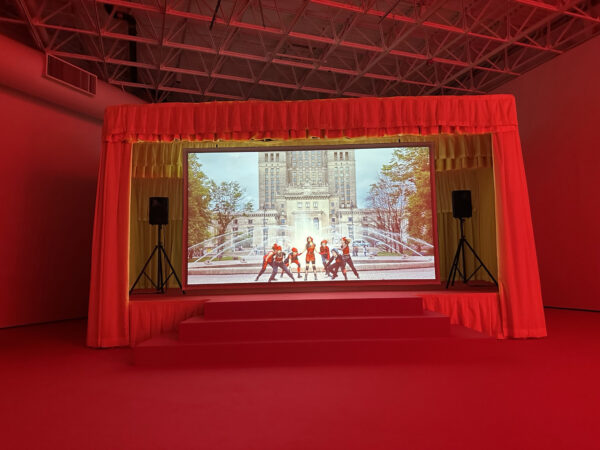 In creating a direct parallel to Blackpink, Nguyen questions the popularity of the pop group and makes the viewer consider what has drawn these “trainees” to K-Pop. In Nguyen’s film (and in the reality of the extremely competitive K-Pop industry), the answer is clear: money. Weronika does not turn to K-Pop training until she is tempted by the gold sequined cap in the second phase. In the film, this desire for capitalistic gains is unnatural, as communicated by the eerie, cult-like training imagery of the third phase.

In reality, many trainees sign themselves into slave-like contracts with the hope of becoming even half as successful as Blackpink. The four members of Blackpink come from privileged backgrounds, whereas prospective trainees (with situations similar to the poor orphan Weronika) are routinely preyed upon by abusive management companies. The majority of K-Pop idols are in slave-like contracts that encourage starvation diets, overbooked schedules, and intense physical training for little (if any) monetary return. This is the case for LOONA member Chuu, who realized her idol contract was a way for her company to put her and her other band members in endless debt while the company reaped the benefits of their success.

In the chorus, the trainees sing: “I pray for death and eternal fame” and “lose yourself to the new image,” calling direct attention to the unobtainable capitalist content of K-Pop songs. This, combined with the dancer’s red, yellow, and black costumes, their sometimes out of sync dance moves, and their not ultra-polished realistic beauty poses, questions if reaching for this unattainable ideal is worth the performers’ time. It also asks why youth subcultures cannot rally around something more substantive that could better unite the East and West: communism. 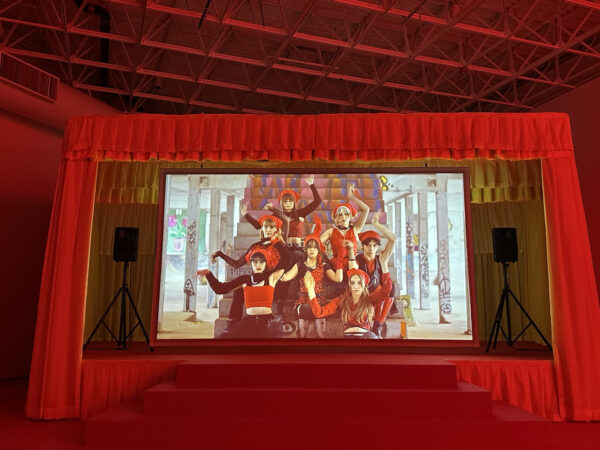 K-Pop itself has a contradictory relationship with Western pop — the idol format is generated from the Western pop market, in which performance, spectacle, and catchiness reignsupreme. Blackpink itself encapsulates this relationship: two members of the group came to South Korea to pursue K-Pop — Rosé was raised in Australia, and Lisa in Thailand. Weronika Nguyen sits in this paradoxical space as well, especially as a biracial half-Asian character.

For Asian men and women worldwide, K-Pop has become an elusive path to riches, stardom, and eternal praise. Nguyen’s cinematography captures this appeal and how seductive it is to young people, while also highlighting the fraught and ironic dichotomies of East-West, collective-individualist, and rural-urban. The dynamic filmmaking communicates Nguyen’s wariness of K-Pop as a community building commodity and warns the viewer that relentless pursuit of capital is unfulfilling, instead directing the audience towards the pursuit of revolutionary ideology and community support in times of loneliness and need. Nguyen’s film ends with one last Blackpink-style cry: “Revolutionary youths of the world: UNITE!”

IF REVOLUTION IS A SICKNESS and other works by Diane Severin Nguyen are on view at the Contemporary Arts Museum Houston through February 26, 2023. The show is supported by programming throughout the months of January and February.