Christina Rees and Brandon Zech found a thematic touchstone in Glasstire’s Best of 2018 list. We recap it here. 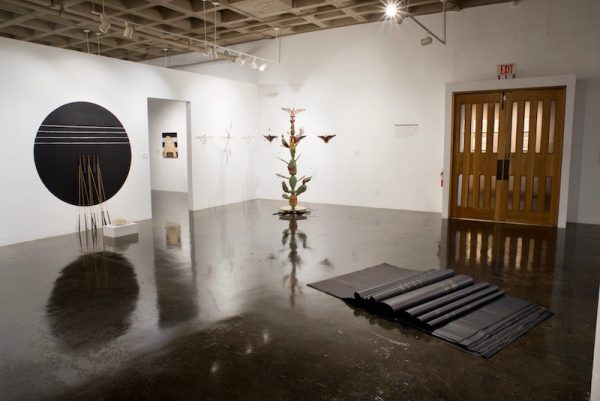 Installation view of Monarchs: Brown and Native Contemporary Artists in the Path of the Butterfly at the Southwest School of Art in San Antonio

1. Monarchs: Brown and Native Contemporary Artists in the Path of the Butterfly at Blue Star Contemporary and the Southwest School of Art, San Antonio
Read Glasstire’s full review here.

The epic, two-venue Monarchs show divided between Blue Star and Southwest School of Art (still on view, through Jan. 6, 2019) takes an au courant curatorial concept — and an ecological, science-related thread — as its launching point and luxuriates in the allegorical idiosyncrasies, chance, and history of the migratory pathway of butterflies and applies it peopled migration. Monarchs is electrically expansive, with a wide range of Latin American and Native American artists working in concert and meditation on geography and identity. Some of the work is wondrous, or devastating, or both. – Neil Fauerso 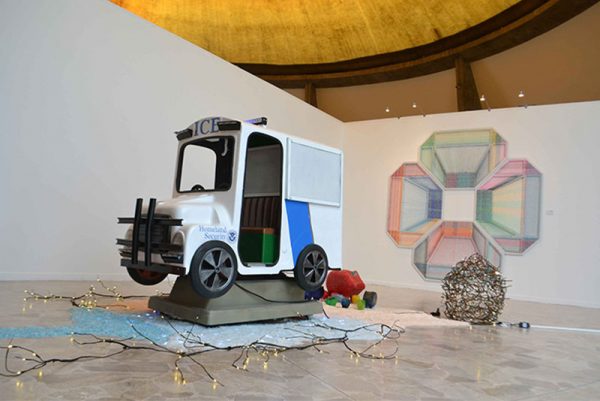 Over the summer, two institutions on both sides of the Texas-Mexico border held their collaborative (and fifth) Transborder Biennial. Rainey Knudson and I attended both, on a day, by walking back and forth across a border bridge from El Paso to Juarez, and we were both struck and touched by the efforts of these museums’ staffs, and of course the artists in the show, to communicate a hope and synergy happening between artists on both sides of the border (the show is an open call to all artists living within 200 miles of the U.S.-Mexico border). This version of the Biennial featured 32 artists and collectives, with work by nearly every artist represented in each institution. FYI: The Museo de Arte de Ciudad Juárez (MACJ)’s building is a gem of mid-century brutalist architecture by Pedro Ramirez Vazquez, built in 1963. The museum itself could well be nicknamed “The Little Museum that Could,” given the space’s lack of practical resources and regular audience in what was even recently considered a murder capital. Here’s hoping for a long-running tradition, and I’m very much looking forward to the next Biennial. – Christina Rees 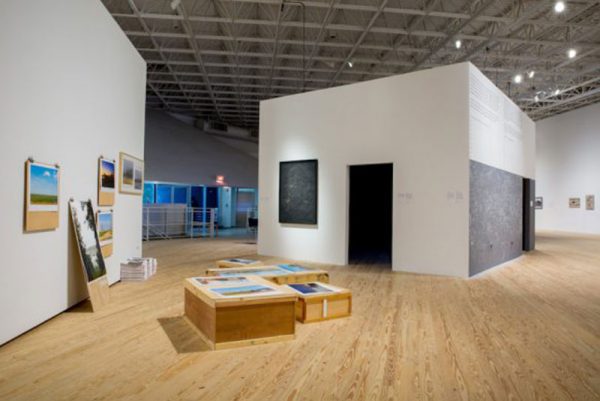 “What is the social role and responsibility of the artist in times of political urgency?” Guest curator Risa Puleo poses and answers this question at the CAMH with selections from 40 artists including Chris Burden, Andrea Fraser, and Glen Ligon. (On view through Jan. 6, 2019) Puleo flays the ultra-flawed justice system with works from the participating artists, laying bare all the layers of its structure, from policing, to incarceration and probation. Carl Pope’s From the Trophy Collection…, a table of trophies he created for police officers involved in extrajudicial killing of black men, is a sharp and cynical jab to the system. – Christopher Blay 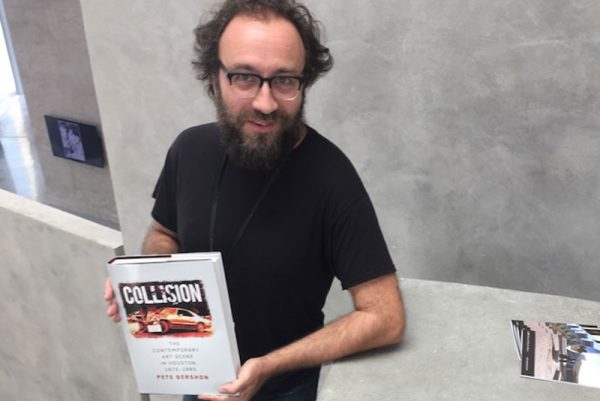 Pete Gershon with his book Collision: The Contemporary Art Scene in Houston, 1972-1985

The fall of 2018 marked a boom in the Houston art community’s capacity for self-reflection. While there are venues and groups around town dedicated to the city’s rich art history — who day-in and day-out do the thankless job of reminding us where we and our art came from — the release of Pete Gershon’s book, Collision: The Contemporary Art Scene in Houston, 1972-1985 was the catalytic event that really brought the city’s art history back into some sense of the zeitgeist.

As a city, Houston has a tendency to forget (or ignore) where it came from. The no-zoning chaos that make the city’s landscape so near-and-dear to our hearts also has a dark side, in that we praise the new while too easily burying our past. I feel that this year I saw Houston artists, collectors, patrons, and art enthusiasts of all ages digging beneath the surface to uncover a history that, to different people, was either forgotten, pushed away, or unknown. Spaces across city — including marquee venues like the Museum of Fine Arts, Houston — hosted shows of works by artists who essentially laid the foundations of the contemporary art scene that we all enjoy here today.

For a long time, I’ve felt that many younger Houstonian artists weren’t aware of their predecessors. I believe the same could be said for the major cities across Texas. Having an art historian or archivist willing to do the substantial legwork of compacting an art history into a distilled tome (even if it can’t be the whole story) is a privilege. -Brandon Zech 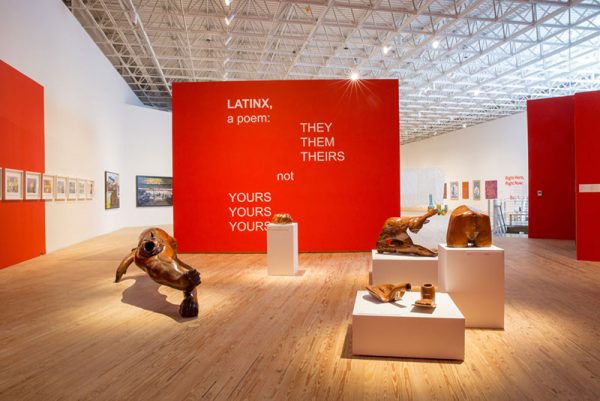 What knocked me out was the amazing selection of paintings and drawings and objects with a decidedly thoughtful, ‘low-brow’ feel, particularly Albert Alvarez’s grotesque depictions of street life and John Hernandez’s Big Daddy Roth-inspired paintings and sculptures. I would add César Martínez’s portraits and beer-bottle label collages, and Ana Fernandez’s exquisite neighborhood paintings. You don’t see this kind of grounded and immediate work being done much in Houston, which is a shame. -Robert Boyd