Drawing from her background in graphic design, Desireé Vaniecia is known for her flat, stylized portraits of women. Over the past few years, while her figures have remained consistent, the context in which they are presented has developed substantially. Been on My Way, Vaniecia’s first solo show at Conduit Gallery in Dallas in 2020, featured five large-scale portraits of female figures set against simple color block backgrounds, and nine smaller-scale paintings of objects. 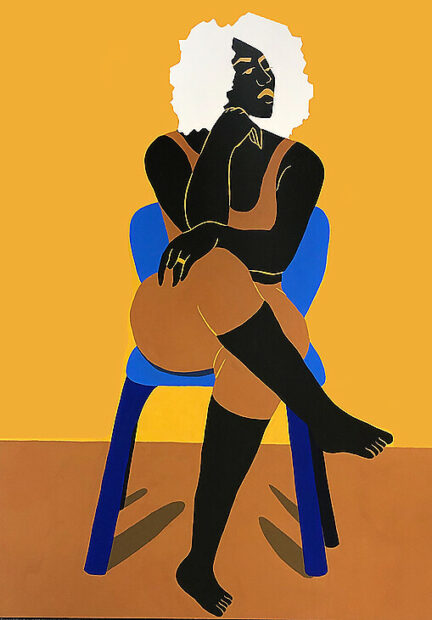 Since then, Vaniecia has begun to incorporate flowers and design elements into the backgrounds of her pieces. Her Portrait Study series, created in 2021, takes inspiration from stained glass windows. Though her portraits depict Black women, a demographic that is often underrepresented in art and media, the style of flat graphic shapes contained by heavy outlines, associated with stained glass, fits seamlessly with the artist’s unique portrait style, and adds a dynamic touch to the compositions. 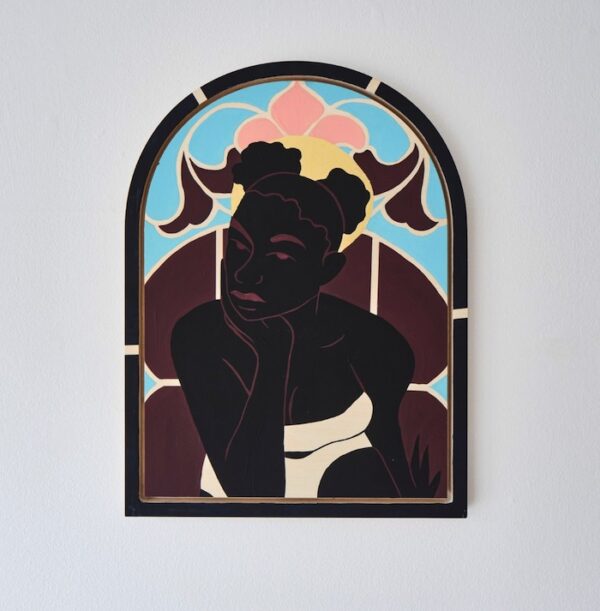 Each painting is a representation of one of the seven deadly sins, as defined by Christianity — lust, envy, pride, wrath, greed, sloth and gluttony. Vaniecia does not directly identify which painting represents which sin, but leaves it to the viewer to decipher through hints in the color palette and symbols within each piece. Instead, through the titles of the works, the artist seems to leave space for empathy, a reminder that the“deadly” sins all stem from a human place.

For example, in one painting the viewer is faced with a protective mother figure whose young child is seated in her lap. The red radiating from the bottom of the canvas feels like an intense fire burning. The scowl on both figures’ faces seems accusatory as they glare at the viewer. The title of the work, Am I Wrong?, makes one question: is wrath ever justified?

Though Vaniecia’s portraits have always been captivating, these new, expanded backgrounds bring a depth to her work. Along with contemplating the figure’s pose and expression, the viewer must also consider the significance of the symbols present in the world that the figure inhabits. While the color block backgrounds helped to keep the physical figure at the forefront of the composition, they also provide important context that grounds and humanizes the subjects, reminding us that behind each person is a deep and complex life we are rarely privy to.

Is This Living? is on view at Conduit Gallery in Dallas through November 26, 2022.