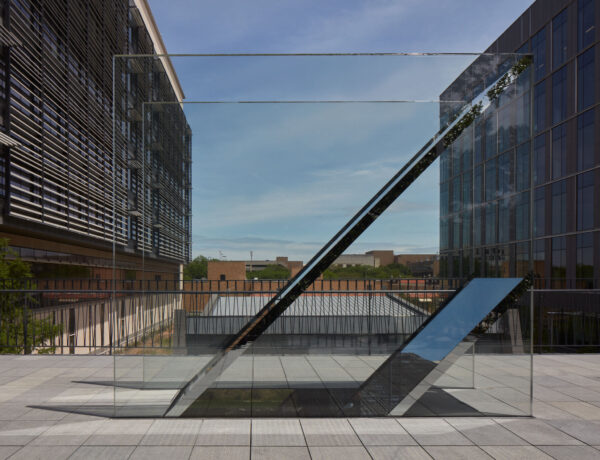 Roars and whistles emanated from a tucked-away construction site, filling the air and flowing through campus at The University of Texas in Austin on one of the first warm days of spring. I took part in marveling at the coordination between man and machine in hoisting a large panel of glass from the ground onto the top of the Peyton Yates Family Bridge some fifteen feet above. Installers seamlessly moved around one another to assume their necessary positions for setting the panel into its designated slot; from on top of the bridge, an installer signed to another operating the crane on the ground, reminding me of a baseball umpire. “It’s like a dance,” remarked Sarah Oppenheimer as she observed her years-long project design and development come to fruition.

Oppenheimer is Landmarks’ newest commissioned artist to enter its collection of public works installed on UT’s campus. Since 2008, Landmarks has acquired and commissioned over 50 sculptures and large-scale installations for free and publicly-accessible viewing across the 433-acre grounds. Of the 42 artists in Landmarks’ collection, Oppenheimer’s work, C-010106 (2022), is located nearby Nancy Rubins’ Monochrome for Austin (2015), Jennifer Steinkamp’s EON (2020), and Sentinel IV (2020) by Simone Leigh — is the first Black woman to represent the United States at this year’s 59th Venice Biennale, where she was awarded a Golden Lion – in North Campus.

Oppenheimer, who was born in Austin, lives and works in New York City and holds the position of Senior Critic at the Yale University School of Art. She has exhibited extensively nationally and abroad, and her work is renowned for altering existing architecture to subvert our bodily and optical experiences of built spaces in a way that generates attention to spatial relationships. C-010106 is Oppenheimer’s first design for an outdoor public space.

Positioned within the footbridge connecting the Engineer Education & Research Center (EERC) and the new Gary L. Thomas Energy Engineering Building (GLT) at the Cockrell School of Engineering, C-010106 consists of two apparatuses, oriented perpendicular to one another, that are each composed of transparent and reflective glass panels. Each apparatus is installed into the bridge itself, held in suspension so that the material produces reflections from on, below, and beyond the bridge, which are viewable to pedestrians walking by. In doing so, C-010106 uses mirror play to introduce visitors to other people and objects occupying their shared environment by offering sightlines that would otherwise be invisible because of architecturally-blocked views. By negating opaque boundaries, Oppenheimer’s design reconfigures spatial hierarchies to expand visual and spatial fields, extending the space’s social capacity. 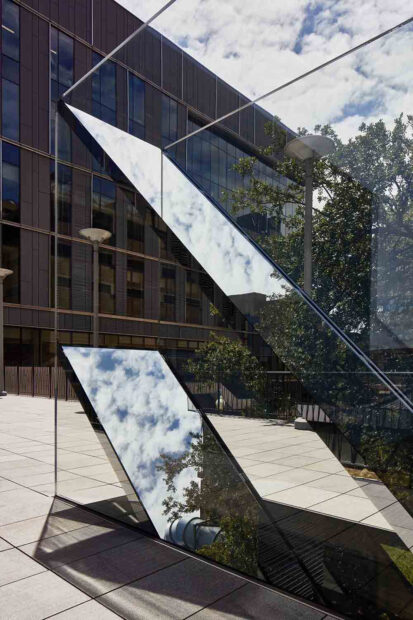 Using phenomenologically-activated objects to explore spatial relationships is characteristic of Oppenheimer’s work. A recently finalized piece, SM-4N, was exhibited in Sarah Oppenheimer: Sensitive Machine at Wellin Museum of Art at Hamilton College in 2021. SM-4N comprises four instruments integrated into an architectural network system that is activated by the human touch. Upon activation, lighting tracks move and walls shift, transforming the exhibition space itself. As visitors manually operate the instruments, the resulting architectural changes that take place bring attention to the ways that individual and communal actions shape collectively shared spaces. Human reach is extended through the network system, filling spatial gaps between bodies via dynamic objects. While SM-4N extends the physical gesture through a tactically-sensitive object network, C-010106 extends the optical gesture through strategic mirror play, producing dynamic reflections.

Approaching C-010106 from ground level, the apparatuses are impressively camouflaged. Two large transparent glass panels, horizontally parallel to one another, encase two internal reflective panels vertically parallel to each other, producing reflections from on and below the bridge. While circling one apparatus, I happen to catch a glimpse of someone sitting on the stairs below, with their head in their hands; I wonder what they’re meditating on – a thought that never would have occurred to me, about a moment I never would have seen, had I not encountered the apparatus. Visitors occupy zones of space visually, rather than physically, by engaging with materials that reflect organic forms, be it other people or the surrounding landscape. Each apparatus is anthropomorphized by the living beings it reflects, counter to its industrial nature. In this sense, C-010106 functions dichotomously to mediate dynamic and rhythmic fluctuations of public space.

The efficacy of C-010106‘s design is contingent on opposition. Each apparatus is built around a central node performing a disposition that dictates the range of the visual field created by the reflective panels. According to Oppenheimer, the more condensed the nodes are, the more expansive the visual fields become. Even the installation process functions according to an opposite system. Oppenheimer explains to me that for each apparatus, the interior glass panels are installed inversely: the lower panel is inserted from above and screwed in from below, and the upper panel is inserted from below and screwed in from above. The practical oppositions within the design allow for spatial and visual dichotomies reinforced by architectural boundaries to be broken down when engaging with the apparatuses.

For example, our perceptual notions of what is physically far from our bodies are nullified as the reflections bring those zones within visual proximity, and what would otherwise be invisible due to infrastructure and architecture is made visible. Of course, while walking across a footbridge we’re aware that there is a thoroughfare below, but our inability to see through the bridge conditions us to remain inattentive to what might be taking place. C-010106 not only brings visibility to that which would otherwise remain unseen, but it heightens our awareness of that which prevents visibility: the physical barriers which dictate our navigation of built space. 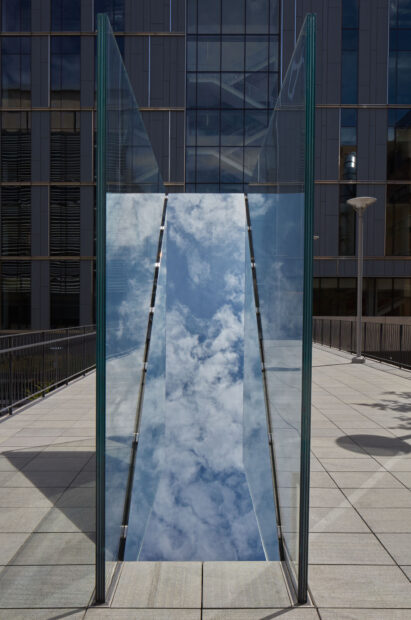 Ironically, C-010106 draws attention to the barrier it is situated within while still functioning as a barrier itself. In fact, the height of the lower internal panel on each apparatus was modified to match the height of the guardrails lining the bridge to satisfy safety codes. Though they are very real boundaries, they are not sensed as such due to their transparent nature. The glass panels harmonize with the environment, remaining incognito, despite being solid obstructions. The apparatuses are large and heavy (just one external glass panel is 3,700 pounds), however, their materiality and installation within the bridge produce the illusion that they’re floating. If the apparatuses were made of a fully opaque material, like steel, their weight and density would be viscerally felt, and their presence would prohibit views.

Though C-010106 is not facilitating foot traffic per se, its transparent and reflective materiality allows it to affirmatively facilitate the sociality of the environment, rather than antagonizing the public space, like the controversy that ensued around the installation of Richard Serra’s Tilted Arc (1981-1989) in Federal Plaza in New York. C-010106 deceives us in its antithetical state – present but unannounced, firm but transparent – prompting questions on how we construct imagined boundaries for personal zones of space. Historically, humans have established physical boundaries as much as we’ve sought to shatter them. C-010106 disrupts the bridge’s barrier, satisfying that within us which yearns to obliterate barriers to explore the in-betweenness of the human experience.

Situated in a threshold within the bridge, partially on top and partially below it, C-010106 is liminal. The bridge itself is evidence of the human impulse to occupy a liminal realm between two points. We often attempt to make sense of in-betweenness by designating such moments as fated or by chance. When engaging with the work, visitors are visually occupying zones of space beyond their physical capability through their reflections, and one person’s movement from below the bridge determines another person’s view from on top of the bridge, and vice versa. While the work’s mediation of people and objects elicits romanticized serendipity of happening upon a view that one would otherwise not have witnessed, the fluctuations of the space are born out of a complex temporal and spatial network that the infrastructure accommodates.

“C-010106 plays with the non-random phasing of human behavior, which is rhythmic, syncopated, and patterned. In a very concrete impliedness, the bridge and its thoroughfare below set up rhythms of human behavior through the architectural environment,” Oppenheimer explains. “The footbridge links distal points along a single path. The architectural conduit shapes patterns of procession. Campus time schedules, affected by diurnal and seasonal change, influence these rhythms of social occupation. C-010106 interrupts these oscillations, re-orienting social interactions across previously unnoticed thresholds and boundaries.” 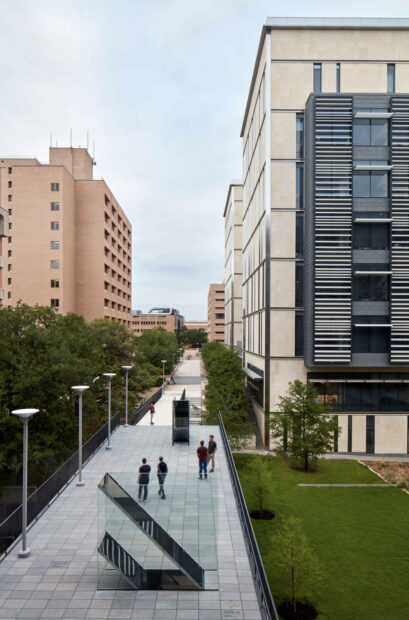 Social rhythms are ubiquitous, yet their intangibility yields passivity and architectural barriers enable us to remain imperceptive to things we can’t see. C-010106 prompts consideration of the ways that our psyche has adapted to conventions of architecture that use boundaries to compartmentalize space. By heightening our awareness of these boundaries, we can more consciously speculate about the people, objects, landscapes, and moments that we share space with, and realize that they’re all participating in producing the rhythmic fluctuations of everyday life. Considering the bridge as a visual representation of connectedness, we must first recognize two opposing and separate points before conceptualizing and occupying the liminal space between them.

Building upon traditional architectural conventions, such as the bridge, C-010106 offers students, faculty, and other campus visitors real-time engagement with an innovative design that updates these conventions by leveling spatial hierarchies and creating a multiplicity of vantage points to stimulate relationships. “Public art shifts our perspectives and offers new ways of seeing and understanding. Sarah’s project, with its unexpected sightlines and opportunities for social exchange, will be a source of countless explorations in the years to come — especially in the realms of visual art, sociology, architecture, and engineering,” said Andrée Bober, Landmarks’ founding Director. “It will be fascinating to see our community respond to it.”

Landmarks is a percent-for-art program, meaning that 1-2% of funding for large capital improvement projects on campus is reserved for the acquisition and installation of public art. Born out of the development of the new GLT Engineering Building, C-010106 has been realized through a multifaceted collective effort from many people filling various roles. “C-010106 is nested within a larger infrastructural building project,” Oppenheimer reflected. “Each building project has its own timeline: from design development and structural engineering to material shipments and final fabrication, each phase has had to be temporally coordinated. This complexity of this coordination has been astonishing.”

There is an extensive network of people who are essential to making public work like Oppenheimer’s free and accessible. “Our list of thanks for this project runs about as long as movie credits,” Bober tells me. “Hundreds of people have been deeply involved, from university administrators, faculty members, staff, and students, to practitioners in the realms of architecture, engineering, compliance, security, construction, fabrication, installation, and project management, to name a few big areas.” In celebration of the unveiling, I listened as those responsible for manufacturing and shipping materials, managing the project, installing the work, and coordinating schedules – to name just a few roles – were recognized. “This project made me aware of how many different actors and actions shape our socio-spatial environment. These layered histories and timeframes are often obscured” Oppenheimer tells me. “When we hoisted the glass up, we collectively witnessed a kind of accelerated temporality. So many interwoven, slow-moving processes intersected and came to fruition in that short interval.”

C-010106 will open at the Peyton Yates Family Bridge at the Gary L Thomas Energy Engineering Building at UT Austin this coming August. The piece will also be celebrated with an online event on September 15.

Wonderful work! Also thanks for discussion and view of Peyton Yates Family Bridge — had no knowledge of this! Definite High Line vibes, approach to art in the public space.