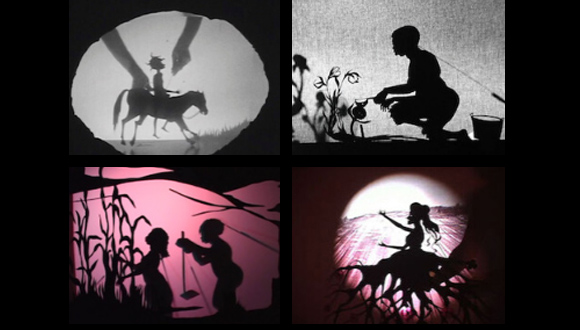 From Top to Bottom, Left to Right (All stills courtesy of Kara Walker and and Sikkema Jenkins & Co., New York): Still from Testimony: Narrative of a Negress Burdened by Good Intentions, 2004. Black and white video. 8:49 min; Still from 8 Possible Beginning or: The Creation of African-America, a Moving Picture, 2005. Black and white video, sound. 15:57 min.; Still from…calling to me from the angry surface of some grey and threatening sea, 2007. Video, color. 9:10 min.; Still from Fall Frum Grace, Miss Pipi’s Blue Tale, 2011. Video, color, sound. 17 min.

University of Texas at Austin’s Landmarks public art program and the university’s Visual Arts Center (VAC) will co-present four video works by Kara Walker in an exhibition this fall. The exhibition, The Fact of Fiction, extends the Landmarks Video program into the VAC’s Fieldworks gallery, and is organized by Kanitra Fletcher, Landmarks Video Curator. Fiction will be on view from September 25–October 23, featuring one work by Walker each week, along with online virtual resources and programs.

The screening schedule is as follows, contingent upon the reopening of UT Austin this fall:

For more information on the lineup and programs at The University of Texas at Austin’s Landmarks and The Visual Arts Center, please visit the websites here and here.

Landmarks is the award-winning public art program of The University of Texas at Austin. Its collection of modern and contemporary art celebrates diverse perspectives, featuring commissioned projects alongside sculptures on long-term loan from the Metropolitan Museum of Art. By making great art free and accessible to all, Landmarks inspires thought and growth.

The Visual Arts Center (VAC) is an artist-driven gallery space committed to supporting process-oriented work and providing a platform for emerging artists, curators, and educators to experiment, test ideas, and take risks. We aim to spark generative conversations about art and contemporary society through our exhibitions and public programs.