by Ashley Allen May 16, 2022
FacebookTwitterEmail 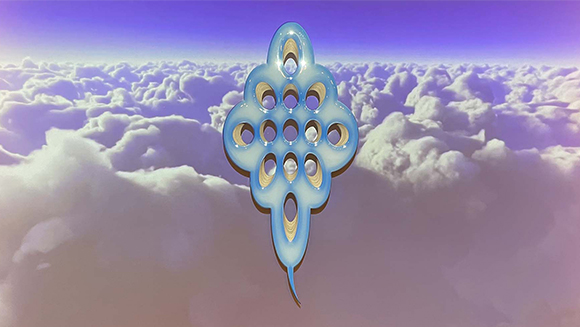 Donald Moffett, a San Antonio native whose work achieved success in the New York art scene, has returned to his birthplace, partnering on an exhibition at the McNay Art Museum with René Paul Barilleaux, Head of Curatorial Affairs. Donald Moffett + Nature Cult + The McNay features works by Moffett in combination with selected pieces by over 120 artists pulled from the McNay’s collection. On view until September 11, 2022, the show incorporates wide-ranging representations of animals and nature in order to draw attention to and politicize Moffett’s concerns about climate change.

Moffett graduated from Trinity University with degrees in art and biology and has worked as an artist and political activist since the late 1980s. As such, much of Moffett’s work is implicitly and explicitly political; Donald Moffett + Nature Cult + The McNay recontextualizes past and present works in order to voice concerns about nature, the changing environment, and uncertain futures. According to the wall text, the exhibition’s atypical layout and installation technique “hints at both the beauty and chaos of human relationships to nature.” 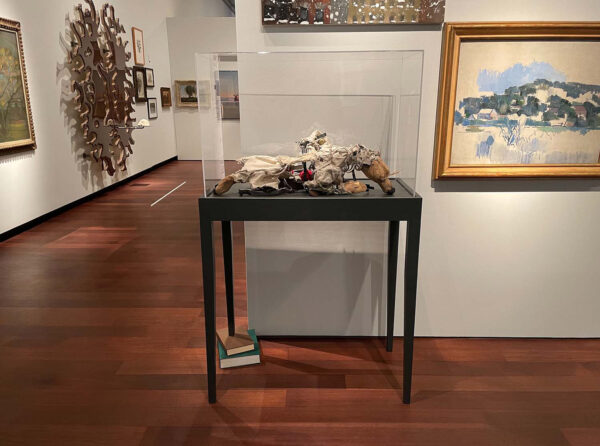 The exhibition space is eclectic and unconventional, to say the least. Moffett’s paintings and pieces from the McNay’s collection are hung salon-style, with works at scattered heights and locations from floor to ceiling. As opposed to traditional eye-level, single row hanging, the salon hanging functions to make the works available for collective analysis. The pieces strategically play off of each other in form and ideas; they meld into a concept created by the entirety of the show, powerfully opposed to any one concept from a particular piece. Taken together, the exhibition offers a critique of humans’ effects on the environment, while retaining an optimistic vision for the future.

Iker Vicente’s 2008 Puppet for Polar Bear in Hoy amanecí con el Polo Norte por dentro is strewn in an elevated glass case within the first room of the exhibition space. The Mexican artist created this haunting mechanical polar bear puppet with materials including wood, cotton cloth, screws, light bulbs and aluminum, among others. The polar bear’s wincing face reflects the turmoil evident in his deconstructed body, with strips of cotton cloth debilitatingly wrapped around its neck and legs. The mechanical polar bear puppet fails at imitating a polar bear found in the wild — instead, it points out how destructive human-made apparatuses are to the natural environment. Technical equipment and machinery are often manipulated for our own needs, similar to how animals are sometimes manipulated and taken out of their native habitats for our own wants. Trapped in a glass cage for our viewing pleasure, the work also points out the unmovable silence animals occupy — as they are unable to speak for themselves, it is sometimes necessary for humans to step in and stand up for them. This work screams that something is seriously wrong. 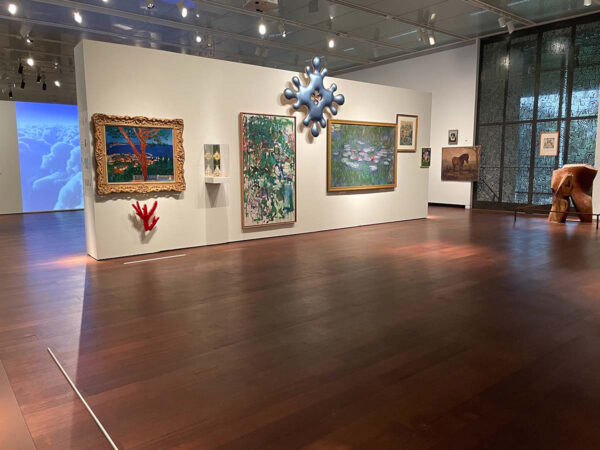 Contrasting this frightful image is Moffett’s Lot 020421 (nature cult, beautiful blue) — the title’s lot number dates the piece, incorporating the month, date and year the work was created. Hung strategically on the top middle of a wall standing in the center of the exhibition space, this “emblem,” as the artist would call it, asserts its presence. The abstract monochromatic sculpture is glossed with a silky blue color that shimmers under the gallery lights. In the core of the emblem is a cross-shaped cut-out, revealing layers of wood underneath. The edges of the emblem protrude out into four pronounced rounded points (also emulating the shape of a cross), with each point flanked by two subsidiary blue bulbs. Molded in a cross or star-like shape, the sculpture adapts the color of the ocean and sky, literally serving as an emblem for the “nature cult” suggested in the show’s title.

The title itself, Nature Cult, carries many associations, including that of exclusivity, obsession, trendiness, and religious and spiritual implications. A cult implies a subsect of people challenging the norm and is usually attributed to religious groups with top-down power structures. Taken in this religious context, “nature cult” can be seen as a celebration and prioritization of the power of the natural environment over human desires. However, the word cult is also wrapped up in some ways with exclusivity, favoring what is fashionable for a certain time among a particular section of society.

Nature conservation and environmental activism, although perhaps trendy, can not be approached as such without risking being pushed to the sidelines once a new trend arises. Therefore, Donald Moffett + Nature Cult + The McNay can be viewed through the lens of highlighting the, at once magnificent, deteriorating, and beautiful state of nature — a nature whose conservation for future generations is in a state of limbo. We should raise awareness to the state of the environment by elevating it to cult status, not so that it may be used to exclude or act as a trend, but so that we can rightfully honor our home through the means of our invested veneration and interventionist protection. 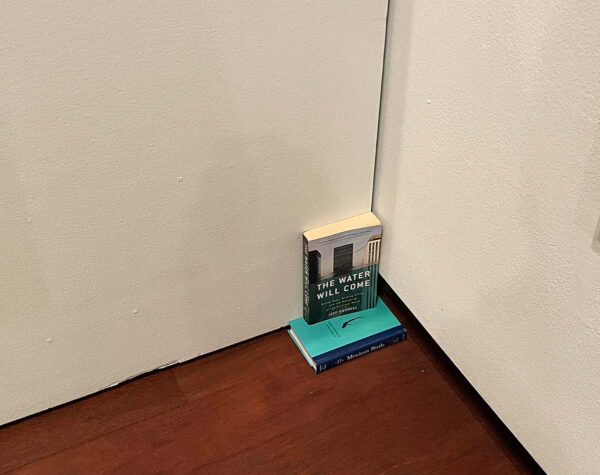 Working to make the exhibition space feel more eclectic and congenial are books precariously positioned on the ground. A book by Jonathan Safran Foer titled Eating Animals is pushed into a corner, literally backed up between a rock and a hard place. Similarly, a book by Jeff Goodell titled, The Water Will Come: Rising Seas, Shrinking Cities, and the Remaking of the Civilized World sits in a corner of the exhibition space atop a book about Mexican Birds. Easily overlooked, but most definitely piling onto the political subtext of the show, these details work to contextualize the major themes of climate change and environmental activism that are circulating among the displayed works. Faced with two equally difficult alternatives, the books provide small ironic reliefs, working to create a more relaxed space around the discomfort of environmental dialogue. They also create a homey space, perhaps serving to remind us that the natural environment we are actively destroying is our only home. 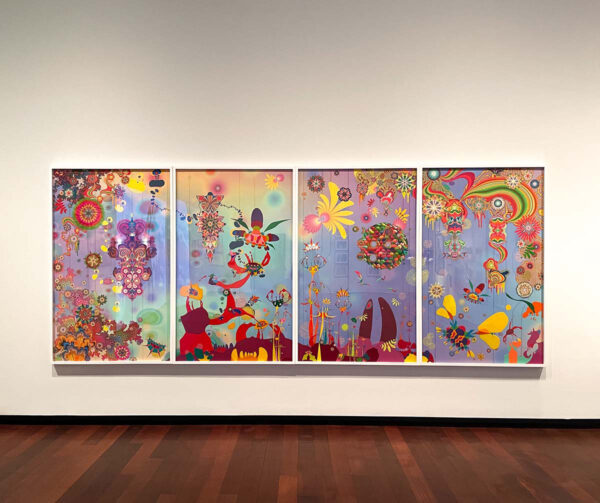 Distinct from our environmental reality, We Came from the Stars is a psychedelic portal into a spirited and dazzling otherworldly realm. Created by Jose Alvarez (D.O.P.A.) in 2011, the large-scale work comprises four panels incorporating natural elements (feathers, quills, and crystals) interwoven on the collaged surface. One’s eye is easily lost in the fine details of the layered surface texture, electric colors spanning the rainbow, and radiating patterns. Increasingly abstracted, but still open to imaginative possibilities, We Came from the Stars is a cosmic vision eliciting associations with microscopic organisms in an eccentric primordial soup. The beautiful work demands your attention for both up close and far away viewing. A transformation of a past and/or an imagined future, far removed from the present, is provided in an uplifting tone created by the vibrant color scheme and swirling geometric patterns in the imagined landscape. Whereas the majority of the works in the exhibition serve as dire warning signs or dismal visions of the environment eroded by human interaction, We Came from the Stars leaves viewers with a more uplifting and hopeful vision of an existence separate from the current climate crisis reality.

The Halff Collection at the McNay