Jenelle Esparza: Artists Looking at Art at the McNay Museum 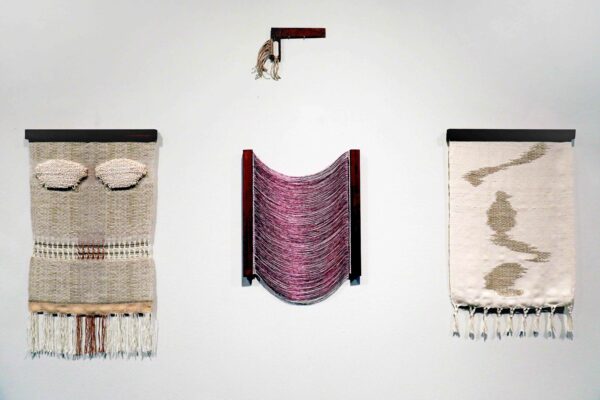 Exhibition view of work by Jenelle Esparza, “Artists Looking at Art,” McNay Museum, San Antonio. Funding for the creation of Esparza’s “Vessels” was provided through an Artists Grant from the City of San Antonio, Department of Arts & Culture.

When San Antonio-based artist Jenelle Esparza started weaving six years ago, she took to it so quickly that she felt like it was already in her bones. “It became like a language that was almost innate,” Esparza told Glasstire on a recent tour of her current exhibition at the McNay Art Museum. “It was familiar in a way, like I used to know how to do it and was just relearning it.” The artist’s first major weaving project was for her 2018 Artpace residency, and resulted in a series of large, wall-sized cotton tapestries. Weaving has been a key part of her art practice ever since.

Artists Looking at Art: Jenelle Esparza features four of the artist’s recent weaving-related works. The pieces — all in earthy colors and intimately-scaled — show the artist taking weaving in new, experimental directions, including the use of found objects and complex and varied patterns. Part of Esparza’s Vessels series, the works at the McNay are an extension of the artist’s long-running investigation of cotton as a physical and thematic material. Her works, including this grouping, focus on cotton’s impact on the history and culture of South Texas, especially among Mexican American families like her own. 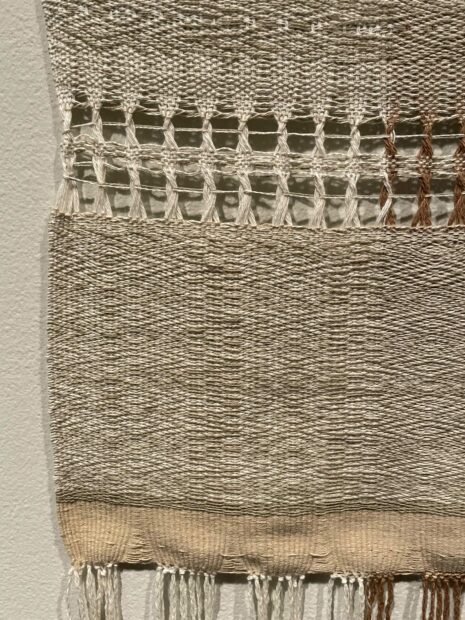 Jenelle Esparza, “Vessels (mother)”, detail, 2021-22, natural cotton and wood. Funding for the creation of Esparza’s “Vessels” was provided through an Artist Grant from the City of San Antonio, Department of Arts & Culture.

Archival research conducted in 2015 revealed that cotton played a role in four generations of Esparza’s maternal grandmother’s side. The artist’s desire to deal with cotton’s impact on the body led her to weaving. While weaving requires a different sort of labor than cotton farming, it is a process that requires direct physical contact between the crop and the creator’s body. At the McNay exhibition, a strong corporeal note comes through in Vessels (mother) (all works are from 2021-2022), a torso-sized piece where two tufts of raised cotton fiber mimic breasts. The piece’s intricate woven design draws attention to the incremental, granular work of weaving, and its beige, brown, and greenish hues come from the artist’s preferred organic, untreated cotton fibers. 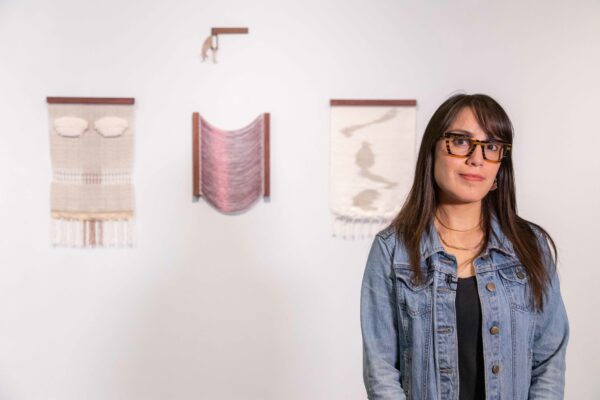 Portrait of Jenelle Esparza with her work as part of the “Artist Looking at Art” series at the McNay Museum, San Antonio. Funding for the creation of Esparza’s “Vessels” was provided through an Artists Grant from the City of San Antonio, Department of Arts & Culture.

The clear reference to the human body in this first piece, as well as the works’ careful arrangement on the wall and their evocative titles, suggest that Esparza has laid out a sort of narrative for viewers to decipher. The artist told me that these works stem from episodes of injustice in the 18th and 19th centuries committed by the Texas Rangers, who killed Tejanos with impunity and stole their land. While I recognize that cotton has a long, dark legacy in Texas and the American South more broadly in terms of slavery, sharecropping, and other forms of exploitation, I didn’t pick up cues about the particular charged history of violence that Esparza mentioned in this suite of works. Perhaps additional pieces in the grouping would have illustrated the message more clearly. Regardless, there’s a subtle but intriguing sense of poetry in Esparza’s delicate colors, quasi-figurative forms, and exploratory technique. Narrative or not, these features are worth looking at and thinking about.

Artists Looking at Art: Jenelle Esparza is on view at the McNay Museum in San Antonio through August 7, 2022.