Who am I kidding with the asterixes?

Anyway, several months ago I began to write a review about San Antonio Draws, a “night of a thousand stars” variety show at the McNay Art Museum. Then I stopped writing it for reasons that are completely emotional and not rational at all. I’ll tell you why at the end. There’s a monster at the end of this blog post.

This show is over, dammit. It was good. The McNay’s curator of prints and drawings, Lyle Williams, chose thoughtful stand-alone 2D work from each artist (there were 28) for the Lawson Print Gallery. He balances the recognizable drawings with more risky, downright eccentric works: Ed Saavedra‘s contribution, for example, sprawls tiny and spiderlike over the pages of a small day planner, and Marlys Dietrick drew and gouached an entire deck of tragicomic playing cards:

Some images’ provenance is so readily identifiable that they’re like graffiti tags; like Judith Cottrell’s signature lyrical density of ballpoint-pen loops, Pollock-like in their rhythm but belying a rigorous, micro-focused detail. 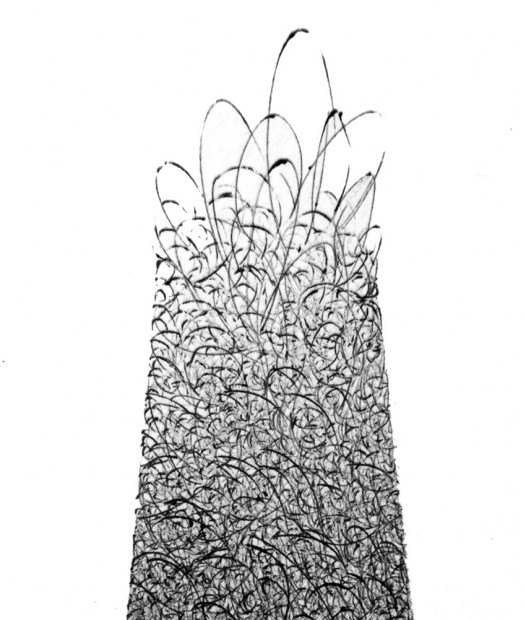 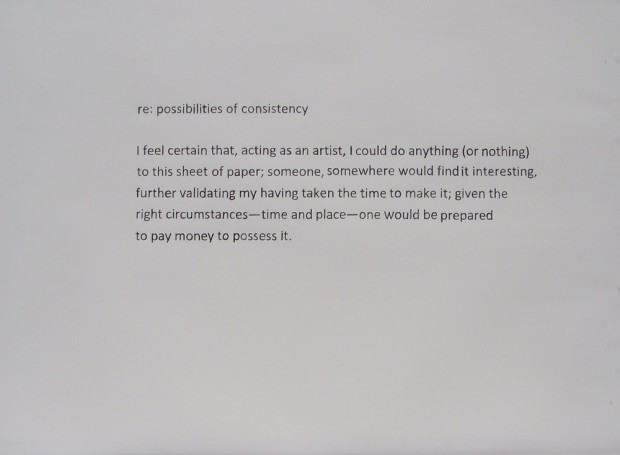 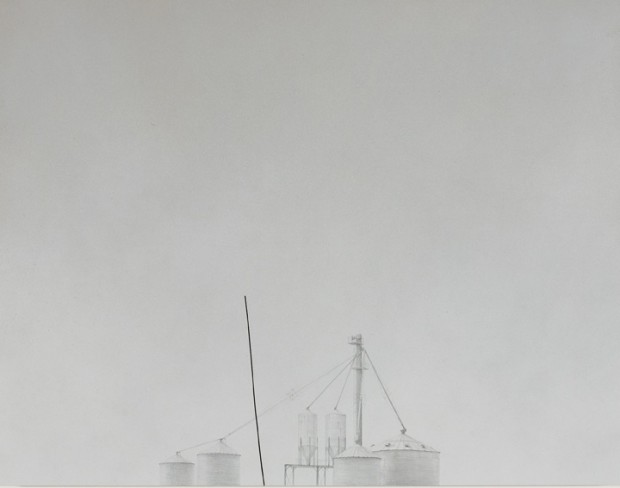 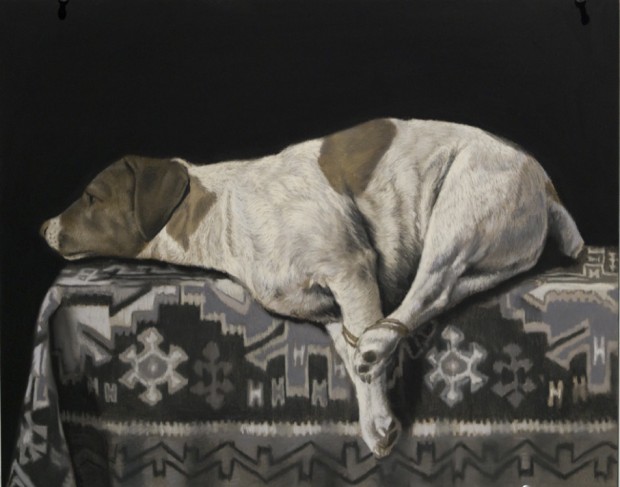 A member of Lloyd Walsh's glorious, enigmatic bestiary. Why's he tied up? The possibilities are troubling. 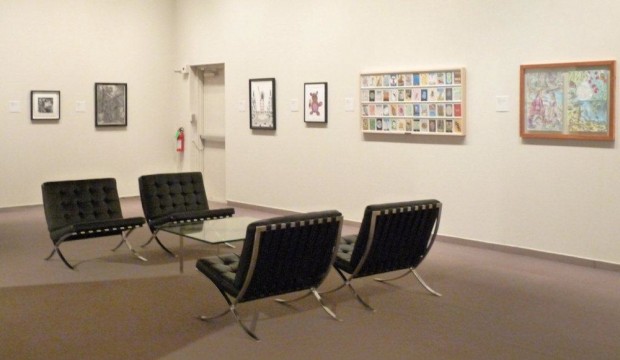 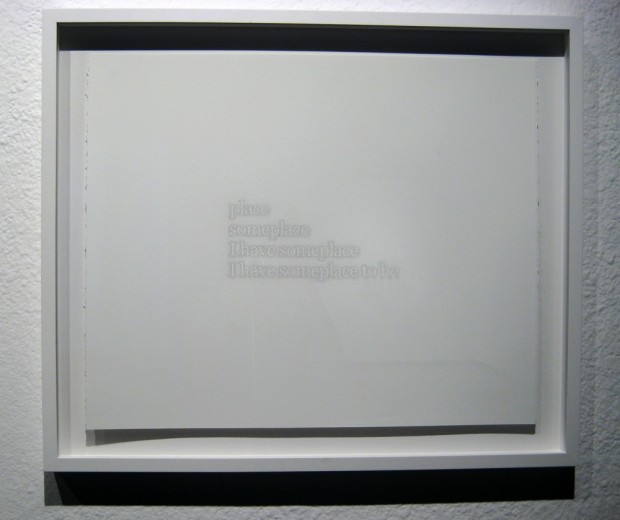 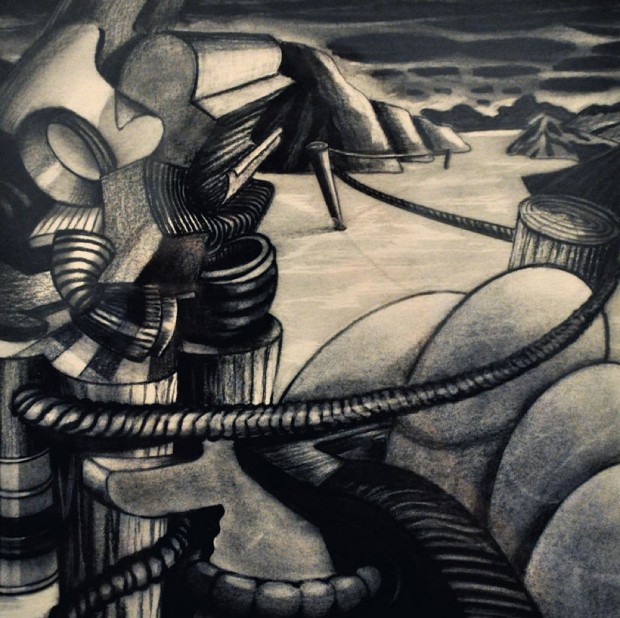 Some really good stuff in there.

The first piece you saw in the print gallery, though, was a Nate Cassie drawing of the late Regis Shephard. 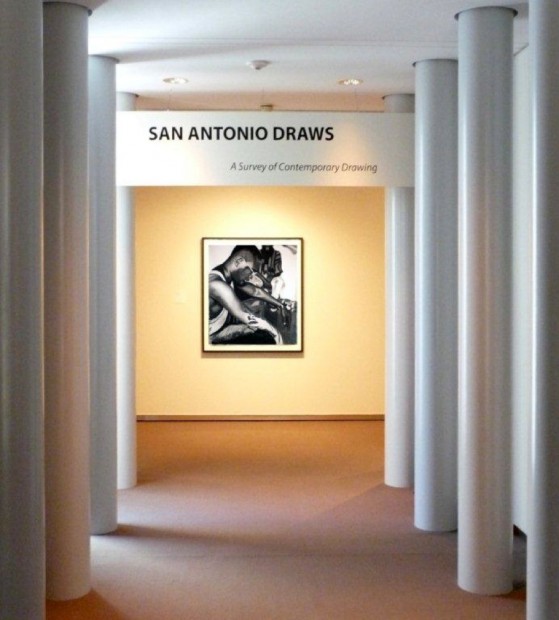 I had seen Regis in jpeg form, but never in person. Its generous scale, straightforward and confident execution, and plain ol’ beauty — even if you don’t know who Regis Shephard was – pack a wallop. And the drawing gives a nod to a tragic irony; except as a subject, there’s no Regis Shephard drawing in this show.  Shephard died last July of a heart ailment before he was 40. He was a prominent and ever-promising Texas artist whose draftsmanship, I’m pretty sure, set stuff on fire. 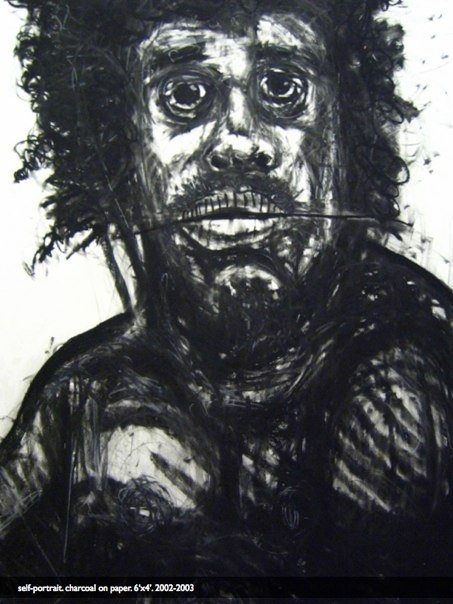 (Not in the show) 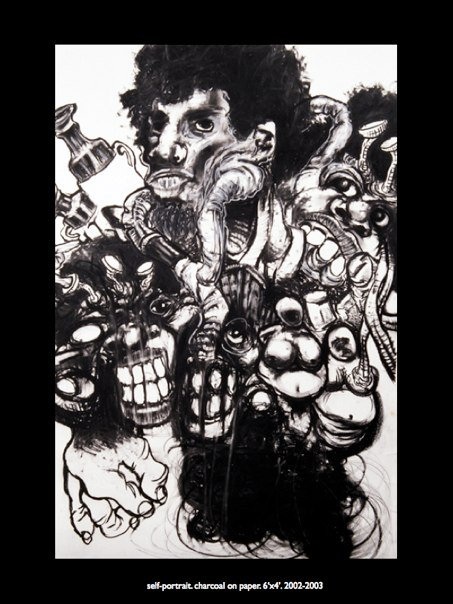 Importantly, Cassie’s drawing was made before Shephard’s death; Cassie based the image loosely on a photograph he’d taken of Shephard when they were in the UTSA MFA program together in the 90’s. Cassie and Shephard stayed friends after grad school, later taught together at the historically-black St Philips College on the East Side. Cassie and Shephard had  solidarity and disagreement, irritation and affection in their relationship, maybe a little competition. The push and pull of a longtime, living friendship is evident in Regis; the guy in this drawing is observed, not memorialized, his moment of interior thought reflected upon, years later, by another. Cassie’s gestural, loose strokes towards the bottom of the picture plane suggest the possibilities of the ongoing. 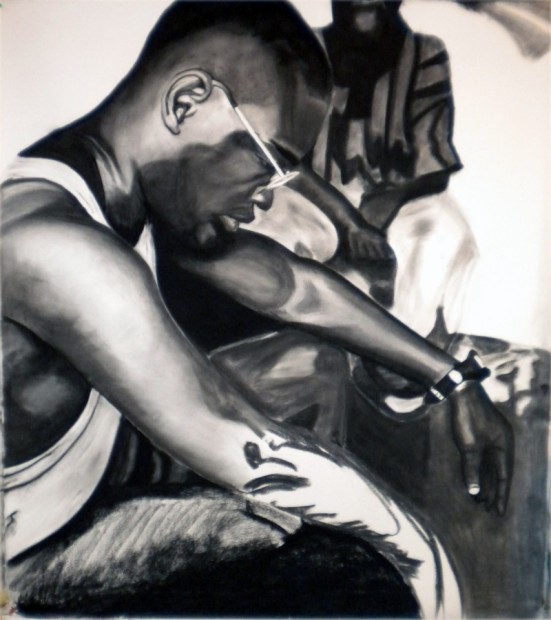 Nate Cassie’s charcoal portraiture is ceaselessly dynamic; his approach to documenting people, with a kinetic, gestural line and unfussy attention to the most essential visual data suffuses them with rough-hewn soul; note the broadly-sketched elbow, say, vs the tender ear.

Nate Cassie’s a multimedia monster; check out his website, where you’ll find video stills from his ongoing Day Job video series, which chronicles SA artists as they make a living, or the elegant blast of color and line in his Flora woodcuts.

(See Nate Cassie discuss his Luminaria entry of ’11 in this clip):

I enjoy the tradition of artists making portraits of other artists, in general. But this one stopped me cold, demonstrating as it did Cassie’s skill, and Shephard’s impact.

After I wrote about Cassie’s portrait of Regis Shephard, I couldn’t write anymore. I put the review away and didn’t open it again. It’s that double punch that shut down this review for me some months ago. But just a little over six weeks has passed since the one-year anniversary of Regis’s death, and he’s been on my mind. Also, I felt some unfinished business with regard to the artists in this show, so here’s the list of them, below, with links to their websites when possible.

Regis was not only an outstanding (I feel unrepresented) artists, but a kind soul and general good person. The loss of his cutting edge sensibility and creativity are definitely missed.

This show was a revelation. Huge, HUGE kudos to Lyle Williams and the McNay for not only showing great work by local artists, but for ferreting out the less well-known stuff (to a non-San Antonian). At the risk of sounding condescending, there wasn’t one small town “they included this piece out of pity, because the artist is such a nice guy/gal” moment. Seeing this show, I realized how much deeper the San Antonio art scene has gotten in the past decade.

Take heed, Metroplex and Houston museum curators, directors and boards: this is the kind of thing you all should be doing regularly, and well. It takes imagination and guts to show the best art in your own backyard, and not just the Safe and Sanctioned, Don’t Worry, We’re Not Rubes art circuit stars.

San Antonio has been a caldron of under-supported gems for many decades. Back to the 1960’s.

I was lucky enough to be a friend and student of the Late Regis Shephard. He is still missed after all of these years. The world lost a great person, artist and mentor. May he rest in peace and forever live in the hearts of everyone that knew him.