La Frontera, or the border, has been described as an obstacle to overcome, as an open wound. Metaphysically it is seen, all at once, as an intersection of being and not being, of entering and exiting. This contested space, both geographically and metaphorically, is home to many who suffer the consequences of the weaponization of the region. This is done by the state and other rogue forces who greedily seek to benefit from the area’s people and resources. Mainstream narratives of the border too often showcase these traumas without explaining either what led to the situation or what resolution, if any, can be found out of the harmful experience. In Aqui Descansaba, on display at the San Benito Cultural Heritage Museum (which, full disclosure, I helped organize), artist Jessie Burciaga uses his work to speak on the disappearances of individuals along the frontera, and to heal from his personal experience with the subject.

Entering the museum, one is struck by the openness of the exhibition space and the large westward facing windows that make up an entire wall. As the   gaze ventures downward it is caught by four wooden bed frames that float above the ground, and evenly frame a large flatscreen display resting on a wooden dresser. The television depicts a view of a baby blue bedroom with a disheveled bed that sits under two open windows with white translucent curtains that blow in the wind. 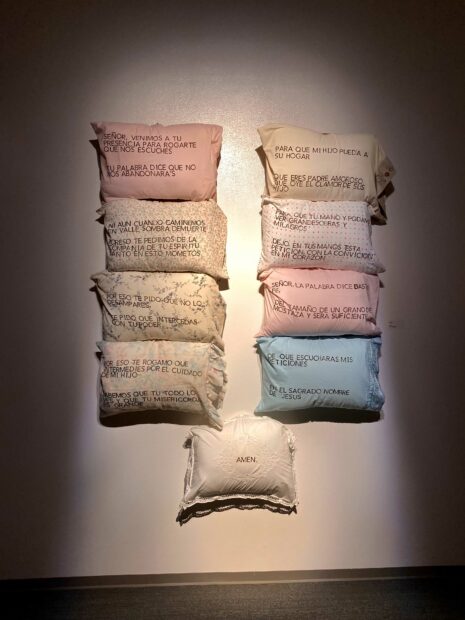 From a distance, the installation welcomes the viewer. It provides insight to the recurring medium of bed sheets, the artist’s understanding of the bedroom as an extension of the self, and the bed as a final resting place for those who are missing or have disappeared.

The piece titled Camas Vacias [empty beds] consists of four large rectangle frames the sizes of twin and full beds, representative of the family unit. A variety of patterned cotton sheets are folded to replicate a made bed. A horizontal line runs through and connects the four canvases. Its light blue, green, and brown palette — while generally considered masculine — references the Earth and the feminine. The floral patterns on the almost translucent sheets show the fading life that remains.

Camas Vacias acknowledges the faded remains that family and loved ones are left to deal with when a person has disappeared or is missing. These semi-personal items represent loss and stages in the grieving process: for example, when a family member or significant other makes their loved one’s bed for the last time, perhaps unknowingly. 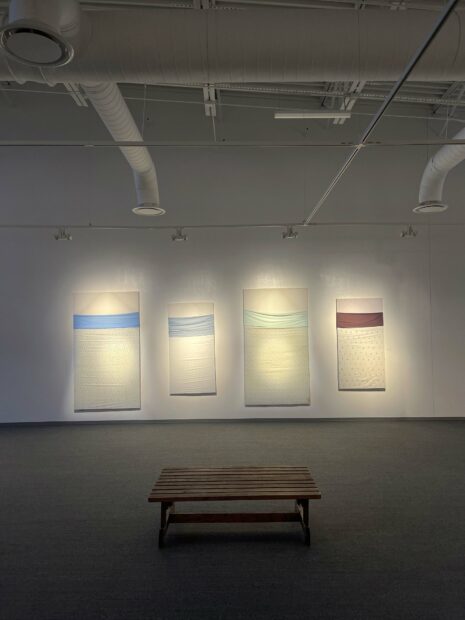 Burciaga understands these emotions well, as his family went through the disappearance of his older brother in 2004. In a previous interview with Trucha, an online publication, he mentions his inability to fulfill his mother’s request of painting his brother’s portrait. He sees the exhibition as part of his healing and part of a larger conversation for many along the border who’ve been impacted by cartel-fueled violence and the drug trade. Burciaga takes the viewer through his grieving process and his experiences of closure, which include religious ceremony and care for the afterlife.

Some of Burciaga’s works incorporate religious symbolism like the Rosary. Others, like Amen, include Catholic texts like the Lord’s Prayer and other personal prayers. Amen is composed of a variety of eight colored pillowcases displayed in two columns, with a ninth pillow place at the bottom, in the middle of the columns. They are stamped with a prayer in Spanish, begging for the care of a son. This is a reference to the Novenario, the practice, which falls on the family, of praying for the forgiveness of the sins of the deceased so that they may ascend to heaven, and asking for a safeguard for the disappeared person’s soul. While the material of the pillows is light and fluffy, the topic the work bears is heavy.

When read out loud or even when uttered in one’s mind, the repetition of the words of this prayer, in a religious connotation, strengthens the request for care of the lost soul. This infusion of religious practice is also a part of Burciaga’s handmade paper series; each of these works holds and covers a rosary that has been used in prayer by his mother. 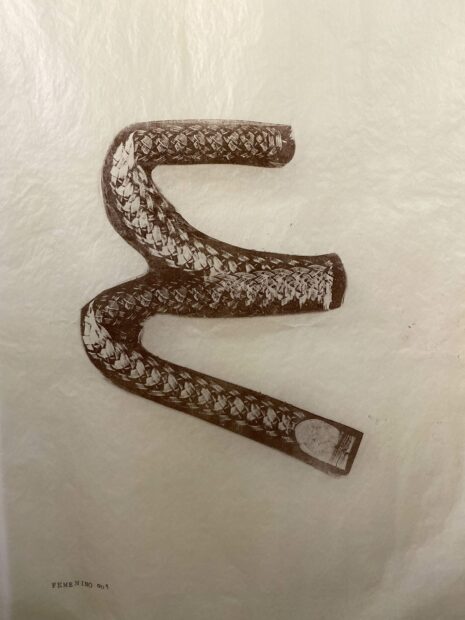 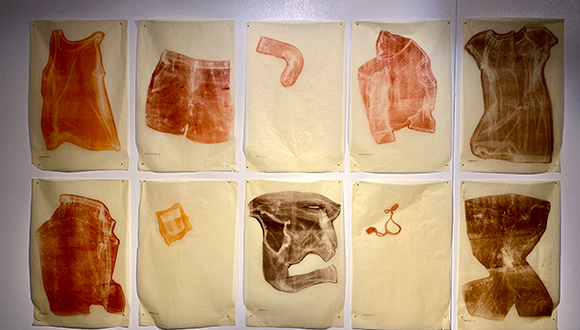 Resolution and acceptance are ultimately what Burciaga seeks. He confronts it directly in the series of ghost monotype prints on tracing paper which feature different articles of clothing. Kids’ dresses, graphic T-shirts, jeans, belts, and undergarments are printed with sepia toned ink. Quienes Son? (Who Are they?) shows beautifully detailed and fragile images that are numerically labeled “Masculino,” “Femenino,” “Joven Femenino,” “Joven Masculino.” This is a cold reminder of the archival process and erasure of victims’ identity that results from the state’s binary structures. The prints are similar to X-rays in appearance, in that they provide some insight into the person’s life. They are also reminiscent of the state’s apparatus of surveillance along the border.

Part of Burciaga’s research for this show was conducted in his MFA program at the University of San Antonio during which he worked with a group of women from the U.S.-Mexico border who were survivors of the disappeared. Through conversations, prayer circles, and actual forensic work of searching for loved ones, he learned the differences in the vocabulary of the “missing” (those for whom hope is still held) and the “disappeared” (those presumed passed).

Searching, as an act of digging into the ground and interacting with its minerals, was also part of Burciaga’s exploration. A video triptych shows that event with various ways of digging — with bare hands or a shovel — the work never ends, like a sisyphean act of searching and grieving. In the piece Cinco Tumbas (Five Graves), Burciaga lays the pain to rest. The artist utilizes rust from iron shavings to create textured stained outlines of garments that are seemingly strewn onto stretched canvas that are the size of unidentified tombs. The references to blood and to chemical reactions talk about our psychological and physical changes; inner strength dissolves into dust, and we return to Earth only to ascend into the sky. A corresponding piece, Femenino no identificado / Masculino no identificado (unidentified female/ unidentified male), plainly but poetically shows this transition.

Femenino No Identificado / Masculino No Identificado (Unidentified Female/ Unidentified Male) is a large loose canvas suspended vertically in the space, from floor to ceiling, with clothing printed on both sides. Anchored at the bottom by a pile of dirt, and clamped at the top with wooden boards, it hangs like a monument of monotypes. The piece acts not only as a metaphor of an obstacle that is seemingly impossible to overcome, but of the steep incline to “heaven.” It is a bridge between the earthly and the celestial, representative of the journey between for those who remain and those who have passed.

Aqui Descansaba shows vulnerability by accepting the painful truth and the contemporary reality of la frontera. Rather than relying on pain as a focal point, Burciaga uses it as an anchor, tethering the realm of dreams, the subconscious, and the spiritual. His work is honest to the experiences of loss and grief, without discounting the hope for a better tomorrow. Aqui Descansaba is a testament to healing through the arts; it showcases an arc with a resolution to some of the strife caused by borders, contradicting the narrative of the frontera as only an open wound. It shows that we can heal, remedy ourselves, and look for a future free from pain in both the heavenly and the earthly.

Aqui Descansaba runs through April 15, 2022 at the San Benito Cultural Heritage Museum. It was curated by San Benito Cultural Heritage Museum Director, Aleida Garcia Wedgeworth, in collaboration with Josue Ramirez, Cultural Organizer for Trucha. It was funded in part by the Border Narratives Grant, provided by the National Association of Latino Arts and Culture and the Ford Foundation.