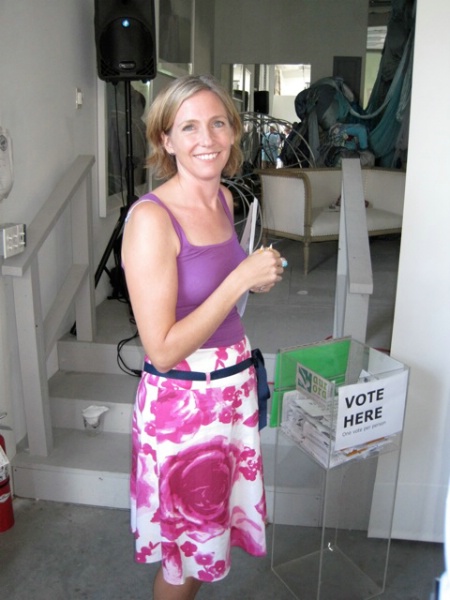 Aurora Picture Show has announced the departure of longtime curator Mary Magsamen, who is stepping down to pursue her own artistic career, teaching, and independent curatorial and consultation work. Ms. Magsamen may perhaps best be known as half of the duo Hillerbrand+Magsamen, which is a collaboration between her and her husband, Stephan Hillerbrand.

After being a supporter and participating artist at Aurora, Ms. Magsamen joined the Houston-based organization in 2008. Upon her hiring, she took on the task of planning artistic programming following the departure of Andrea Grover, Aurora’s founder and former curator. Over the past thirteen years, Ms. Magsamen oversaw a multitude of projects and programs which focused on making connections between historic and contemporary works, exploring the possibilities of media art production, and centering women artists.

During her tenure, Ms. Magsamen was a part of The Idea Fund regranting program, which Aurora co-manages; oversaw the Extremely Shorts Film Festival and the BYOB (Bring Your Own Beamer) projection festival; and curated screenings, installations, performances, and associated programs. Through these programs, she worked with emerging artists from Houston and beyond, as well as pioneers of experimental media including Barbara Hammer, Carolee Schneemann, Gary Hill, Doug Aitken.

In a press release, Aurora Picture Show’s Executive Director, Sarah Stauder, stated, “Mary played a significant role in shaping the current identity of Aurora Picture Show. Her artist-centered approach to curation along with her thoughtful understanding of experimental film and video art resulted in over a decade’s worth of memorable, engaging artistic programming. We wish her the best in her future endeavors.”

Ms. Magsamen remarked: “Thank you, Aurora Picture Show, for a fabulous 13 years! I learned so much about film, video, art, non-profit art management, projectors, screens, generators, table linens, and everything in between. From screenings, performances, site-specific installations, and award dinners, I have had a blast, and Aurora will always be a bright light on the road of my adventures.”

She continued, “Having the opportunity to work with so many talented artists has enriched my mind, soul, and life. Saying goodbye to my role as curator at Aurora was not an easy decision, but I’m excited about new explorations and seeing where they lead me. Houston is a special place because of Aurora Picture Show, and I know that Aurora will continue to grow and shine its magical light on the moving image universe.”

In the coming months, Ms. Magsamen will wrap up a few projects with Aurora. A public celebration for her will be held on Sunday, April 10 2022, from 1 to 3 pm in Aurora’s courtyard.

Under Mary’s leadership, Aurora Picture Show has immensely enriched the art scene in TX and the southwestern US, especially in the realm of video art. Her own art work is so wonderful, of course, that I can only be glad if she’ll have more time to pursue it; but her shoes at Aurora will be very hard to fill.

Thank you, Mary, for all you’ve done.

Thanks for everything. You will be missed.