“One Man’s Garbage is Another Man’s Gold.” Everything is Terrible! Descends on Texas 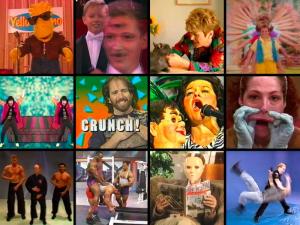 Later this month, the Chicago-based video blogging/comedy group Everything is Terrible! will come to Houston and (and two other Texas venues) for the first time to present an omnibus of some of the worst found VHS clips from the ’80s and ’90s, called “The Legends.”

Aurora Picture Show will host the event on Feb. 22. EIT! bring with them “an evening of live comedy and discarded video oddities that are mixed-up, mashed-up and reconstructed to satirize popular culture and entertain.” They promise “props, puppets, sets, and costumes” to coordinate with a screening of “thousands of unseen clips mashed together in a style unmatched in its pace and range of truly psychedelic comedy.”

EIT! has been scouring the country for the best of the worst infomercials, home videos, exercise and instructional tapes, public service announcements and the like since 2007.

For more info on the Aurora stop (tickets needed), as well as stops in Denton and Austin, go here and here.