The Amon Carter Museum Pairs Past and Present in Current Exhibitions

In a press release, the Amon Carter Museum of American Art in Fort Worth, announced their 2022-23 exhibition calendar which includes two exhibitions currently on view that pair historical and contemporary works. 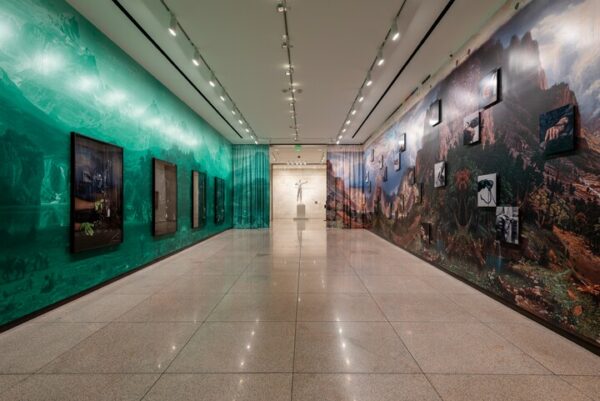 Stephanie Syjuco: Double Vision, is a site-specific installation that opened in January of this year. The installation includes two series of printed photographs installed on top of floor-to-ceiling vinyl murals. Ms. Syjuco, a Filipino-American artist who works in a variety of mediums, is known for exploring social and economic issues as well as the legacy of colonialism. In this installation, the artist investigates myths of the American West by transforming images of works of art from the Carter’s collection. 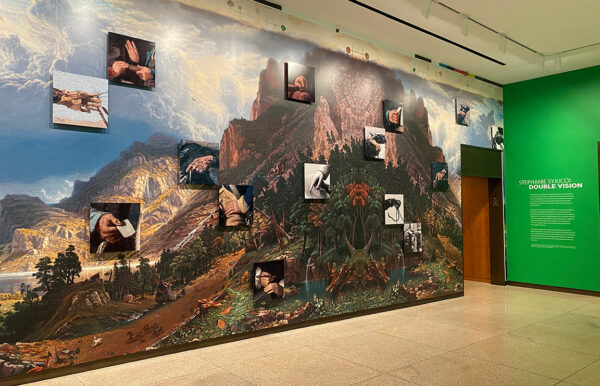 On one wall, Ms. Syjuco installed a set of twenty-five dye sublimation prints on aluminum on top of an enlarged and modified vinyl mural of The Storm in the Rocky Mountains by Albert Bierstadt. The prints, titled Manhandled 1-25, depict close-up details of men’s hands in artworks on view in the museum’s collection galleries. Kristen Gaylord, Associate Curator of Photographs at the Carter, told Glasstire that the artist chose to feature imagery of men’s hands wielding power — signing documents, holding reigns, and brandishing weapons. In this way, the artist draws attention to how people, and white men in particular, shaped mythologies of the West. 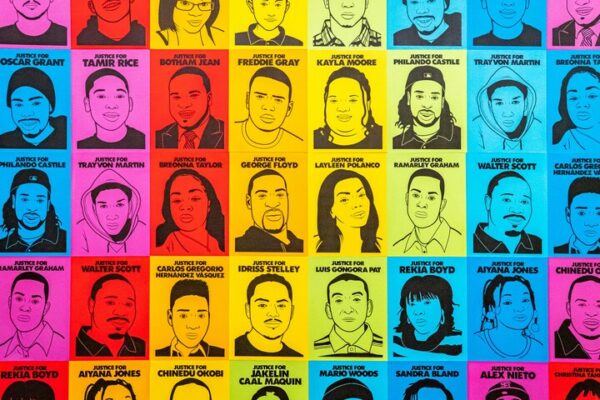 ¡Printing the Revolution! The Rise and Impact of Chicano Graphics, 1965 to Now, an exhibition organized by the Smithsonian American Art Museum, also recently opened at the museum. The exhibition was initially intended to be on view at the Smithsonian from November 2020 through August 2021, but was closed for six months (November 2020 – May 2021) due to the COVID-19 pandemic. The Carter is the first stop on its national tour, though additional sites have not been announced yet.

In a video introduction produced by the Smithsonian, E. Carmen Ramos, who was then the Acting Chief Curator and Curator of Latinx Art at the Smithsonian American Art Museum, discussed the significance of the exhibition’s focus on graphics. She states, “The graphic medium is so important as a site of this articulation of Chicano and Mexican American identity because it was affordable, it was easy to reproduce and disseminate, and it was also an artform that could be public. Many of the works in the exhibition are posters, meant to be displayed in public space, meant to convey information about an event or a cause.” 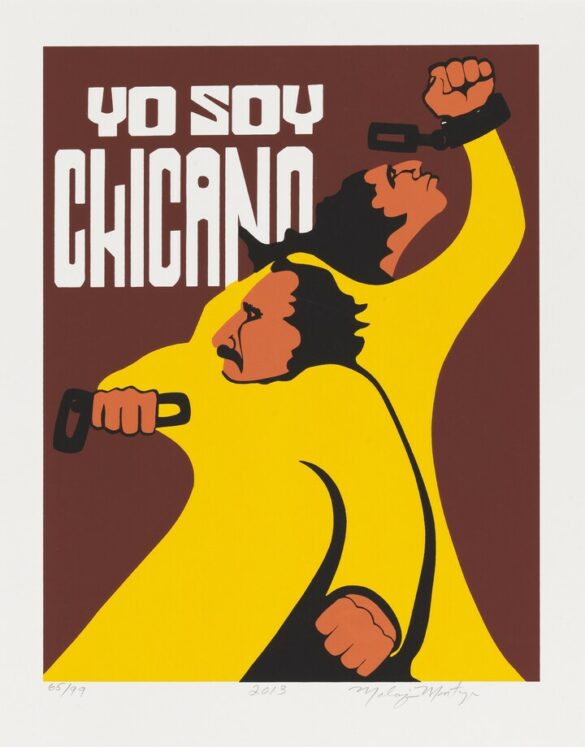 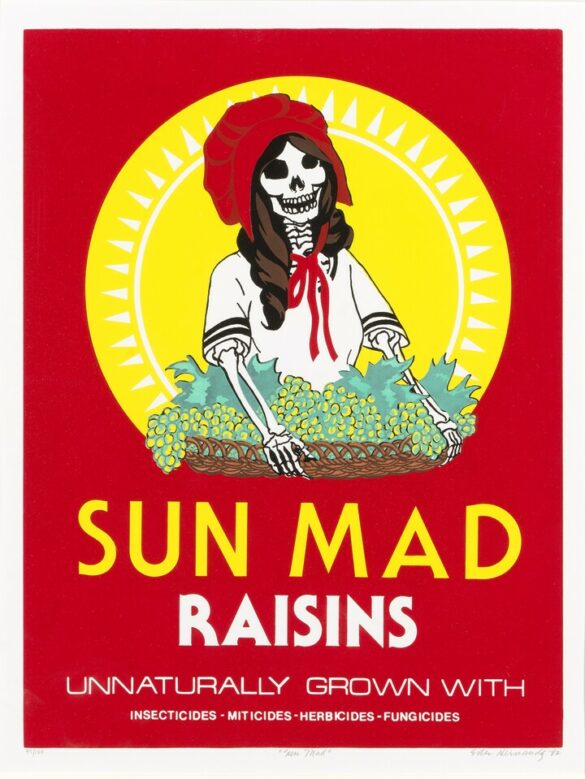 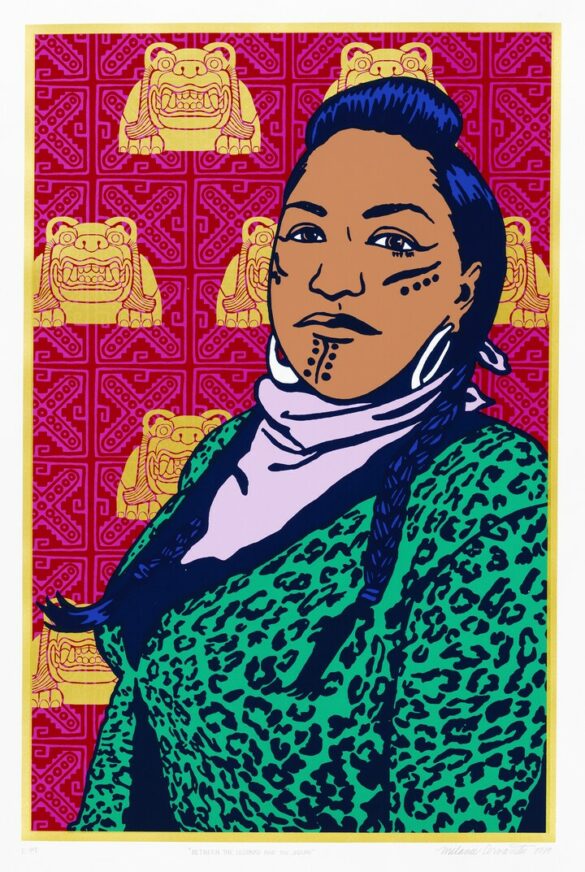 ​​According to the Smithsonian’s website, this exhibition is the first to bring together historic prints from the Civil Rights era and contemporary works that expand the graphics medium into the digital age. Rather than being presented chronologically, the exhibition is laid out in five themes: Urgent Images, A New Chicano World, Changemakers, Reimagining National and Global Histories, and Public Interventions and Digital Innovations.

Spencer Wigmore, Associate Curator of Paintings, Sculpture, and Works on Paper at the Carter, spoke with Glasstire about the significance of this exhibition to Texas and the Dallas/Fort Worth area. “The show is rich in iconic figures from Texas art history, with ten artists with strong ties to the state and a number of artists who worked in the area at some point in their lives… One facet of the show is that it seeks to present local histories of activism in a national and international context.” 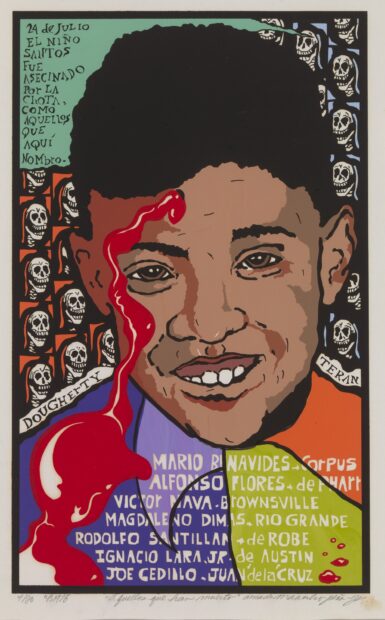 One such work is Aquellos que han muerto (Those who have died) by Amado M. Peña Jr., who was born in Laredo. This work uses a school picture of Santos Rodriguez, a twelve-year-old boy who was shot by a Dallas police officer while he and his thirteen-year-old brother were handcuffed in a police car. In the print, Mr. Peña includes names and locations of other Latino victims of police brutality in Texas.