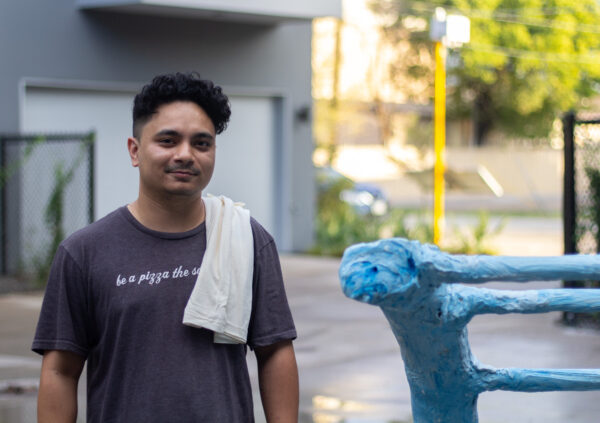 Niva Parajuli at the opening of Chin Chin & Muck Muck 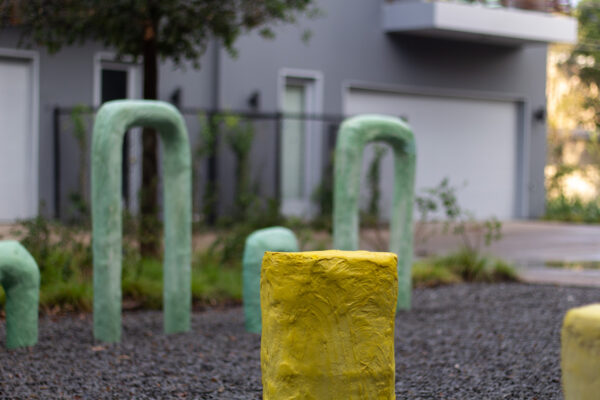 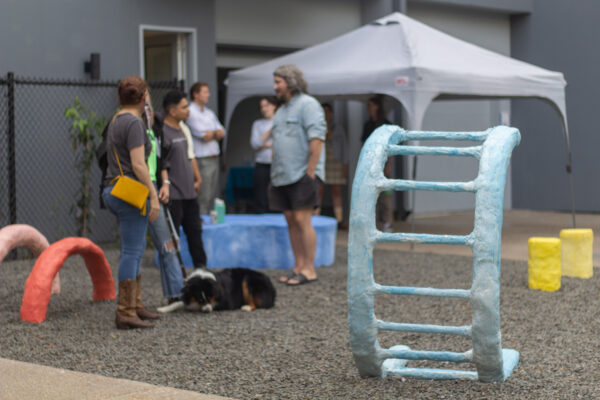 Niva Parajuli’s Chin Chin & Muck Muck is a mock-playground of plaster sculptures installed inside the private drive of a recent housing development in west Dallas. It’s the first of a series of semi-permanent installations commissioned by Oaxaca Interests, a real estate investment firm. The piece’s forms noodle around at the development’s central public space, where they greet residents and guests on their way to and from home.

Though an HOA board vote was required to green light Parajuli’s project for the space, the application pool was developed by Tamara and Trey Johnson, who operate Sweet Pass Sculpture Park. The two noticed Parajuli’s developing painting practice during his graduate studies with SMU, and suggested that he pursue creating public projects.

The installation is a set of curvaceous objects that invite interaction, although they are not all capable of bearing weight. The plaster and pigment works are rooted by rebar, and a blue pool piece — a more solid, bench-like object — comfortably sat several during a reception for the installation.

I asked the artist about their intention to create this specific work for a space that would be seen by many people, even though the project is not exactly a “public” artwork in the traditional sense. Parajuli had this to say:

“I think the playfulness is very important in the way I work. It just emerged when making this project. Using very simple and playful shapes, like these stoops and humps and swimming pool shape. I’m always drawing things from what I see.” 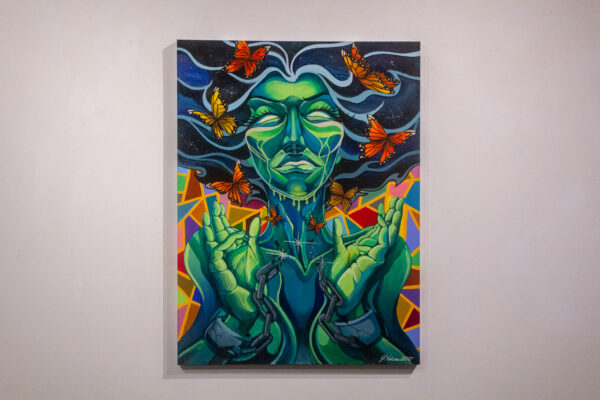 Jarrad Hamilton: The Healing Heart, on view at the South Dallas Cultural Center 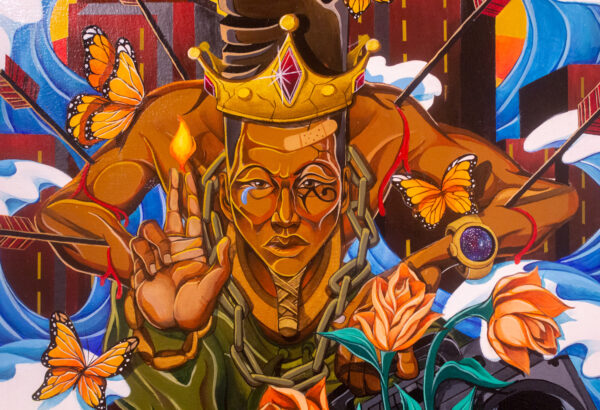 Jarrad Hamilton: The Healing Heart, on view at the South Dallas Cultural Center

Jarrad Hamilton’s exhibition started with a men’s healing workshop in June of 2021: he conducted an open mic event with readings and discussions about masculinity in his community in collaboration with the South Dallas Cultural Center. The event was so successful that the Center’s manager, John Spriggins, followed up with a studio visit to see what the two could accomplish with a formal exhibition. What’s on view in the resulting show is a collection of paintings of the artist’s most prized motifs: crowns, butterflies, and the gaze of his subjects.

In planning for the exhibition, when Spriggins saw Hamilton’s digital drawings, he knew they should somehow be included in the show. He told Hamilton, “let’s get inside your head, in terms of drawing.” Spriggins then pulled and printed images from Hamilton’s sketchbooks in order to demonstrate the artist’s process. Samples of drawing and drafting skills come to the fore in the installation in the Center’s project room, a smaller enclosed space within the main gallery. 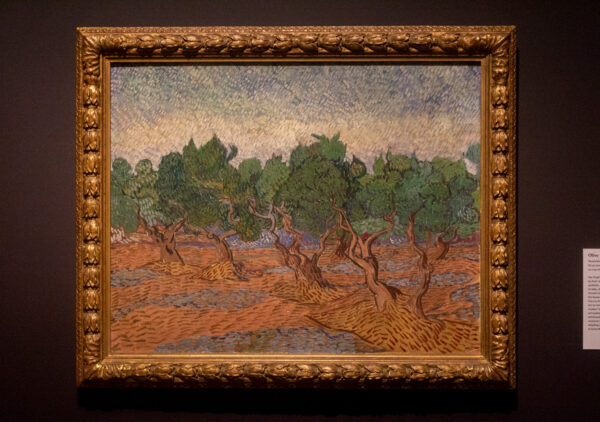 Van Gogh and the Olive Groves, on view at the Dallas Museum of Art 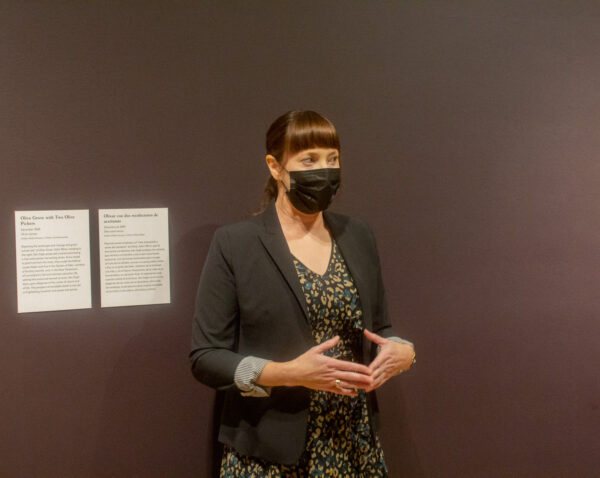 The Dallas Museum of Art’s (DMA) Director Agustín Arteaga introduced the museum’s survey of Van Gogh’s olive grove paintings as “perhaps one of the most important exhibitions we have been able to accomplish in recent times.”

This show is nearly ten years in the making: before coming to the DMA, when she was at the Nelson-Atkins Museum in Kansas City, Missouri, Dr. Nicole R. Myers tried to conduct research on Van Gogh and couldn’t find much on his olive grove series. The paintings had never been studied or exhibited in total. In this, she saw an opportunity to examine the paintings as no one had done before. On an explorative trip to the Van Gogh Museum in Amsterdam, she hoped to secure a few paintings for exhibition purposes; instead, she walked away with a partnership to develop an exhibition on the entire suite of works.

The paintings, which Van Gogh made following treatment at a sanitarium, depict a grove in the town of Saint-Rémy in France. His trees, which he painted en plein air, are a particular subject: they’re not of a specific shape or color, though they are evergreen. The leaves have a two-tone quality, a challenge for Van Gogh’s interrogations of color and perspective.

Van Gogh’s own letters complicate the timeline of when the works could have been completed. Research for the exhibition began with an initial prompt: to nail down a date for the series. Meetings with experts began in Holland in 2018, bringing conservators, scientists, and curators together to scrutinize each painting. Miraculously, the team eventually settled on some answers.

Their findings primarily revealed that mineral-based pigments found in the paintings were stable, but the organic dyes were much less so. Laura Hartman, a paintings conservator with the DMA, hand-painted reproductions of the works in the series to explore what Van Gogh’s colors might’ve looked like fresh, before they had been aged by light.

“It wasn’t until we put paint to canvas that it really made sense how much control Van Gogh was putting into the painting process. It was a fun challenge, I think we learned a lot,” said Hartman.

“We came out learning all 15 [pieces] in the series were affected by this red lake fading. Van Gogh mixed these red lake paints with almost every other color to achieve this wide palette,” states Meyers, in an evaluation of the artist’s color theory.

In the Bible, olive trees grow in paradise; they are symbols of eternity, longevity, and the wonder of nature. This symbolism impacts Van Gogh’s narrative as an artist who struggled to remain stable.

From Dr. Meyers: “For him, he really associated this idea of immortality with both Christ’s death, bust also His resurrection. You can feel the life energy pulsing through the landscape and the style.” 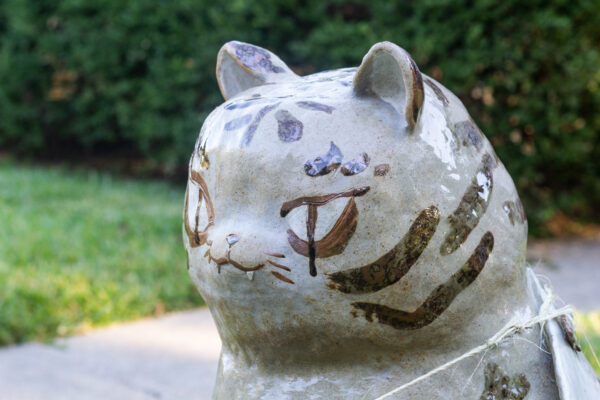 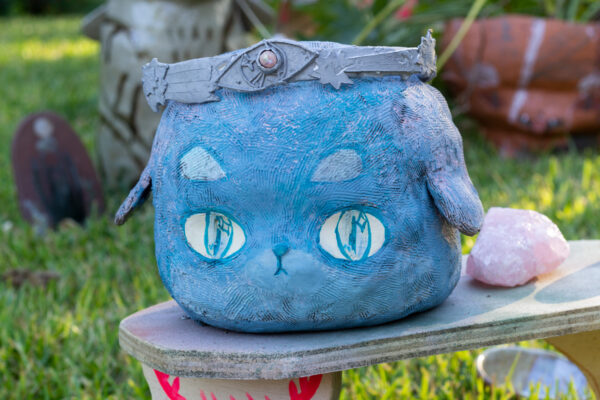 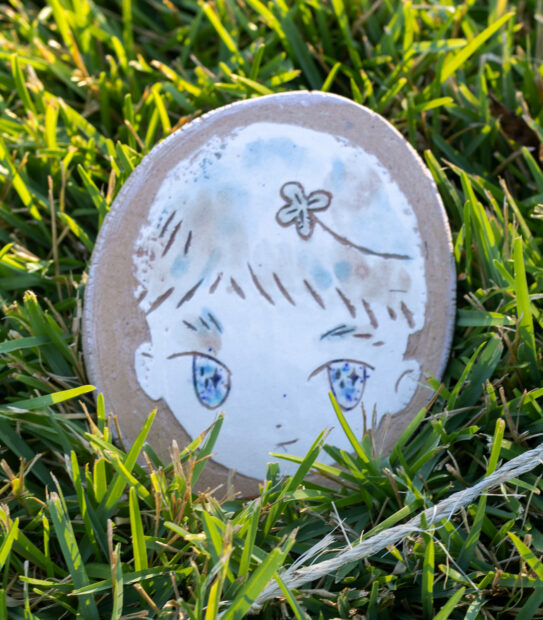 Mylan Nguyen’s Nahualito is the artist’s own styling of a spirit from Mexican and Mesoamerican folklore. Nguyen consulted writing and research conducted on the spirit to arrive at her sculptural works. The figure here is a “shape-shifter,” which can be seen through Nguyen’s manifold applications of ceramic. Nguyen’s installation at Terrain Dallas invites surreptitious inquiry; ask the spirits your wildest questions in the twilight hours for best effect. 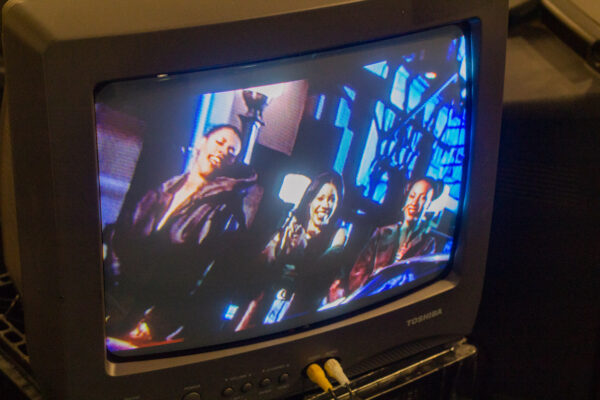 Ciara Elle Bryant, Run it Back (Detail), on view at The MAC 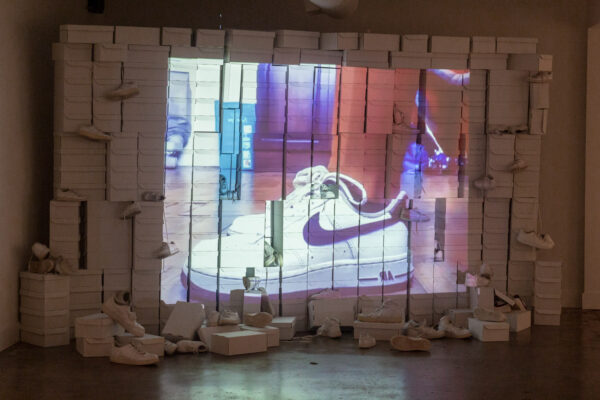 Ciara Elle Bryant, Checks on the Block, on view at The MAC

Ciara Elle Bryant’s current show at The MAC is a significant development for the artist. Instead of an environment of overwhelming matrices of images in a single room, Love Ta is several installations of static and moving images. The artist usually presents a new Server work with each show, but here we get several updates.

Large format portraits are surrounded by the artist’s usual application of myriad screengrabs and JPG downloads. There is an exchange happening across media, but the form on display is production. The production of images has always been present in Bryant’s Server series, but the show’s deep dive into Nike’s stalwart Air Force One shoe line is a new import for her oeuvre.

The shoe, as a brand and a signal of a lifestyle, has ascended into something of a “commodity,” as the artist calls it. The idea of the Air Force One brand holds prominence in the market of salable shoes; replicas are easily acquired, and authentic shoes can be held and resold. Aside from sizing, all the shoes on display in one piece in the show, Checks on the Block, are white, matching their cardboard boxes which serve as a projection screen for the installation.

I asked the artist if she would offer a definition of a “server,” the computer blocks that run our daily connective digital activity. She said: “for me, it always has been something to hold and record and store data. With this [show], instead of making the posters, I made the individual prints, all 700 of them.” 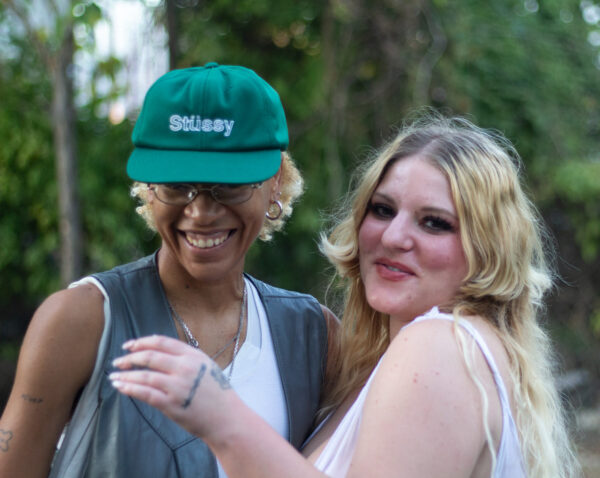 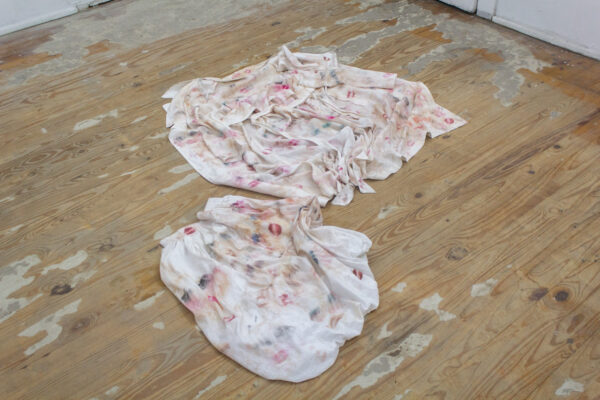 Scarlett Gray, Leaving Marks I & II, on view at PRP 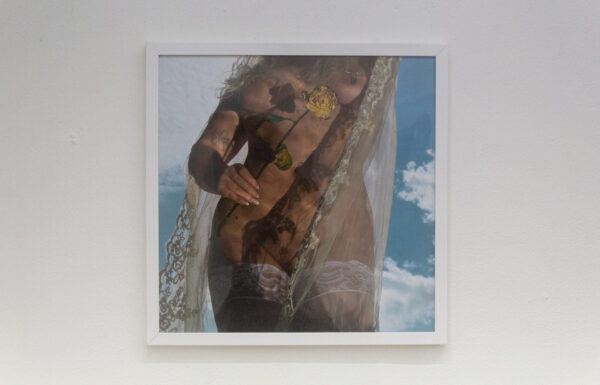 Scarlett Gray: Press Your Body Against My Body, on view at PRP

“I’m used to being seen through this lens of vulgarity,
Judged for each of my harmless choices”

The above are lines from ACT II – (excerpts from) Love Spell, a video work in which Scarlett Gray narrates scenes of sexual expression. Their work is from a series entitled Solo Acts of Exhibitionism, which is an accurate but perhaps loaded euphemism for the nature of human sexuality. The artist is showing their pure form, as artists should in a show. Here, Gray’s body is offered for view, with a unique take on what autonomy can be.

“Scarlett’s had a steady art practice for years,” says the show’s curator, River Shell. The two artists are friends, and intimacy is an aspect of both their practices. Gray insists that the work on view is autobiographical, but still makes room for poetry.

While watching the video works in the back room of PRP, I was struck by the way the artist’s spoken cadence resembles Samantha Robinson’s performance in The Love Witch (2017). In the film, the protagonist, a witch living in Southern California, uses sex magic rituals to draw a new lover after her husband conspicuously winds up dead. I asked Gray if they had seen the film. They responded, “I really enjoyed it, I thought it was beautiful.”

Review: “Negative Women” at the Houston Museum of...