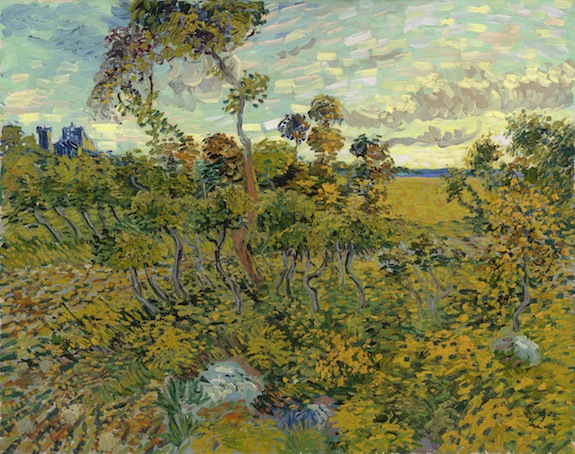 After sitting six decades in a Norwegian industrialist’s attic, an 1888 landscape by Vincent Van Gogh was authenticated by the Van Gogh Museum. The painting, Sunset at Montmajour, is the first full-size Van Gogh canvas to be discovered since 1928. At an unveiling ceremony, Museum director Axel Rueger described the discovery as a “once-in-a-lifetime experience.”

The exact date of the work is known because it is referred to in a letter Van Gogh wrote to his brother Theo the day after he painted it. It was sold to a French art dealer in 1901; the family of Norwegian industrialist Christian Nicolai Mustad says that Mustad purchased the painting in 1908. Soon after, he was told it was a fake, so Mustad tucked it away in his attic for decades. After his death in 1970, the painting was sold. Whoever owned the painting in 1991 actually brought it to the Van Gogh Museum to authenticate the painting, but the Museum did not do so.

When the painting was brought back to the Museum in 2011, the experts had the advantage of a new compendium of all Van Gogh’s letters, and they were able to identify the exact location depicted. Researchers then spent two years testing pigments with every type of microscope available. The New York Times reports that another clincher was an x-ray examination of the canvas and underpainting, which showed it was of the same type Van Gogh used on at least one other painting from the same period: The Rocks, in the collection of the Museum of Fine Arts, Houston.