Cigarettes and Candy: Some Winter 2021 Exhibitions in Dallas and San Antonio 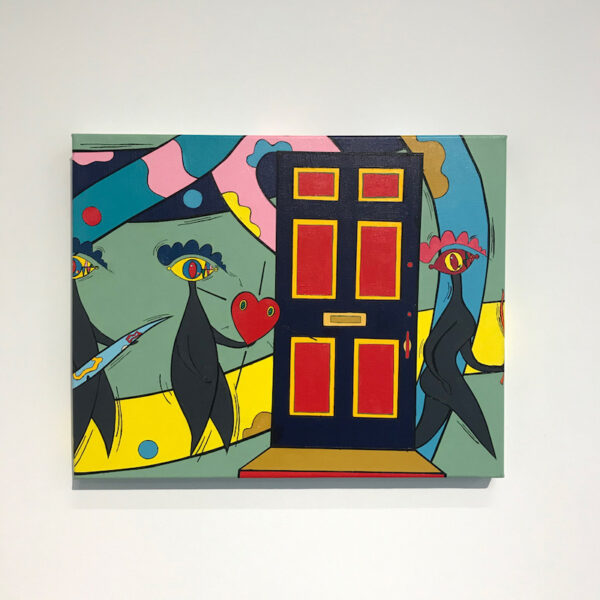 Jeremiah Onifadé, Speaking of Which, 2019, acrylic on canvas at Site 131 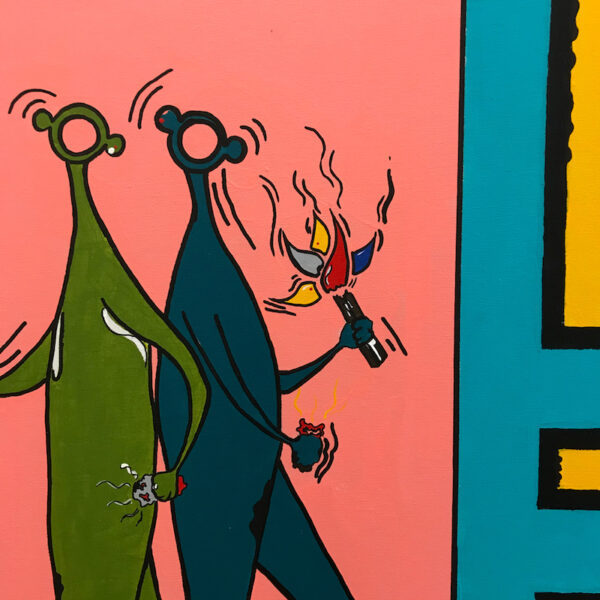 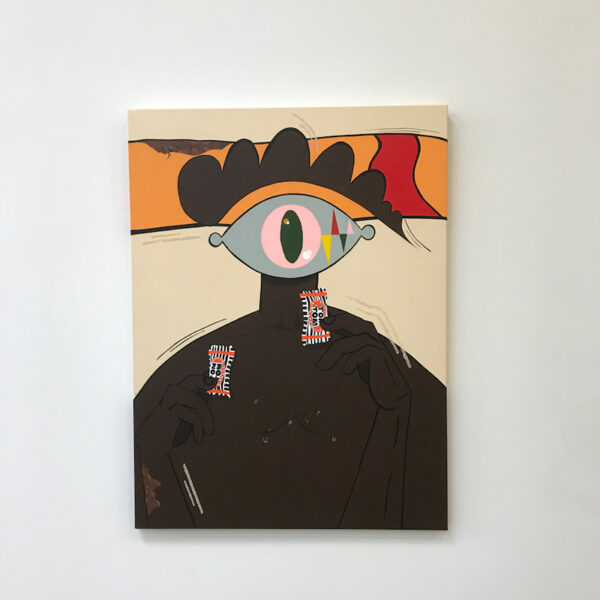 Read the titles of Onifadé’s cartoon stills, and they feel not-fictional. A Visit to State Camp depicts the candies that soldiers would hand out to children in placation during the heavy military presence in the artist’s native Nigeria. What’s fantastical about them is the squinty character he’s created, pinched at the neck and limbs, with a radio frequency bouncing through it. 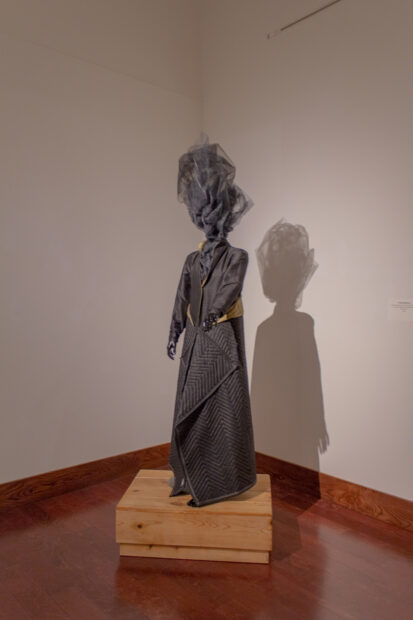 Talley Williams, a MoveMe(a)nt, 2018, at the South Dallas Cultural Center 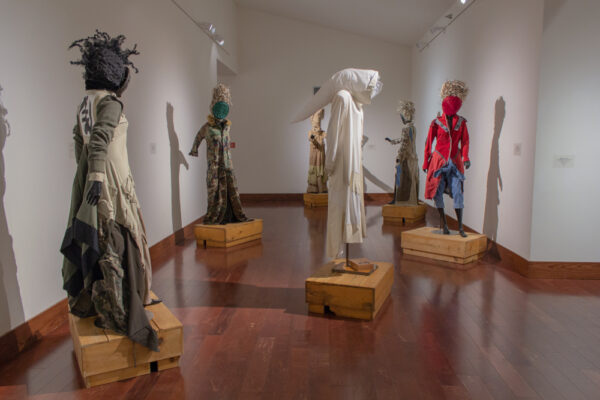 Talley Williams, Playing in the Dark, Burned but Not Consumed (Installation View) at the South Dallas Cultural Center 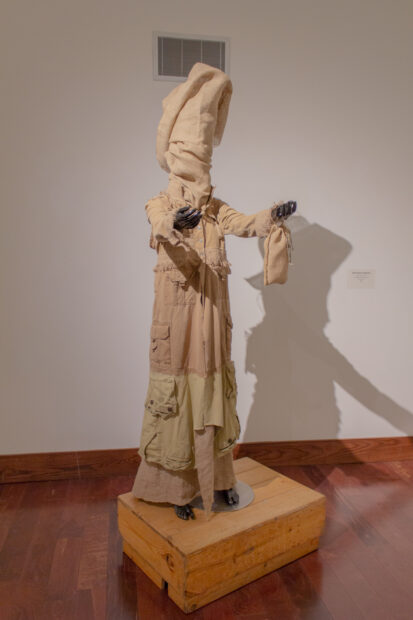 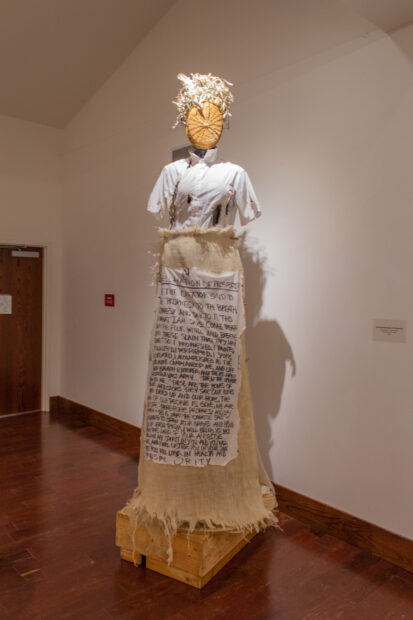 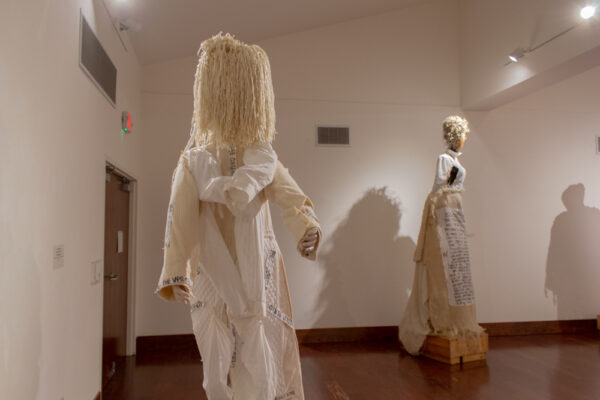 Talley Williams, Accomplished, With My Arms Tied Behind My Back, 2020, at the South Dallas Cultural Center 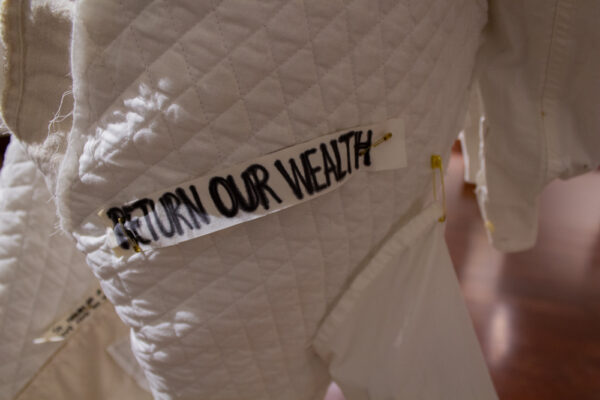 Talley Williams, Accomplished, With My Arms Tied Behind My Back (Detail), 2020, at the South Dallas Cultural Center

Williams’ artistic journey begins on May 5th, 2010, when she had an out-of-body experience. Her work carries a kind of visionary impulse, an urge to get the word out. What that word is you may read for yourself, scrawled along the clothing of her figures. The mannequins in this exhibition are costumed in cotton, jute, denim, leather, and other natural materials. 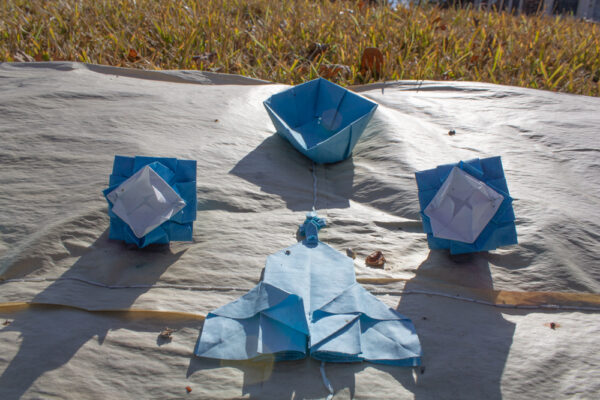 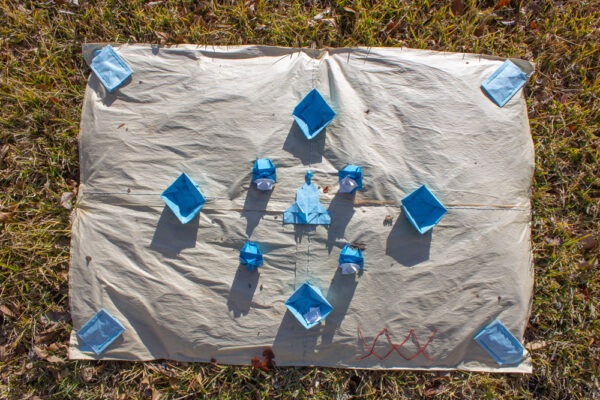 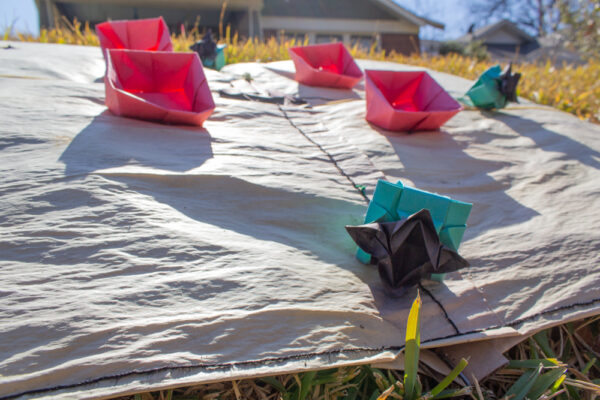 Terrain Dallas is the lawn of a house, a space offered by artist Iris Bechtol, who has been hosting multimedia installations since 2014. Terrain Dallas went on hiatus from 2016 until April 2020, when Bechtol exhibited her own work. Bechtol has stated that her own experiences with art began outdoors, before she ever entered an institutional exhibition space. The lawns of the United States have been mobilized for art before; Sabina Ott founded Terrain Exhibitions in Oak Park, Illinois in 2011.

On view for my visit: Andrea Tosten’s dedication to craft is primarily spent with calligraphy and bookbinding. As a thoughtful artist working in craft, she has taken the substrate of the medium (paper), and applied a variety of uncommon applications. Here, exposure to the elements, and a non-lexical approach to a 2-dimensional surface are the rule. After extending the show through February 6, I was sure that the winter rain would have compromised the integrity of the origami boxes sewn into the ground. My visit revealed that they had survived the weather — a little sun-bleached but still intact. 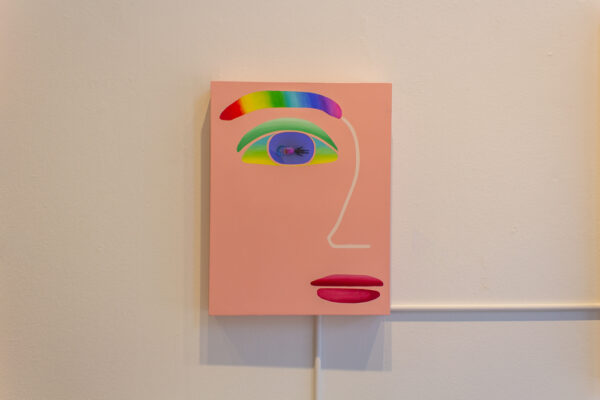 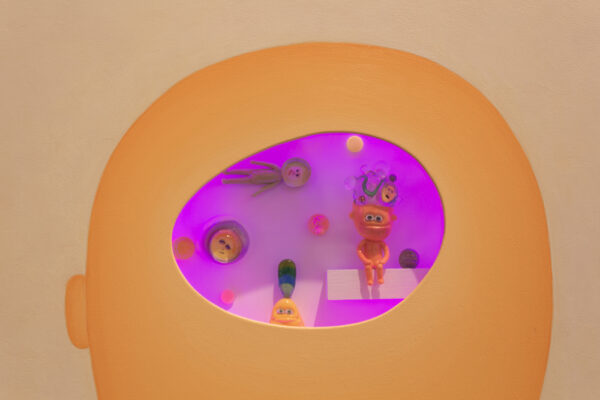 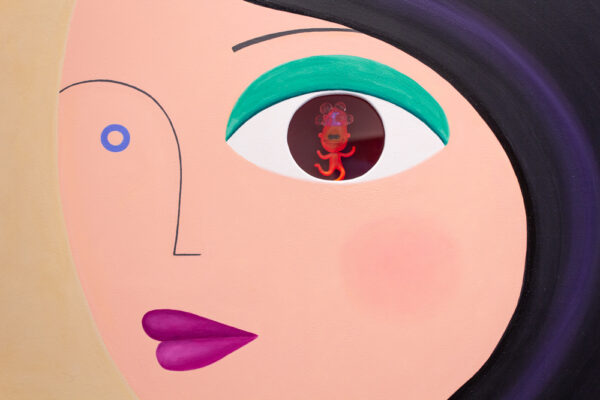 The flameworked miniatures inside the eyes of Karen Woodward’s flat portraits glow with dimension and LED light. A busy mind carries lots of shiny characters in these beautifully constructed paintings with cerebral cavities. 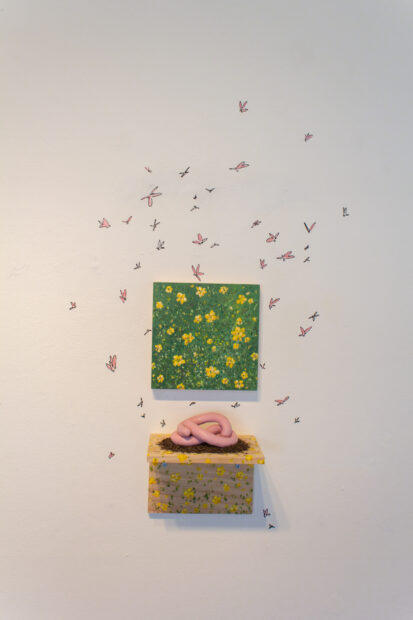 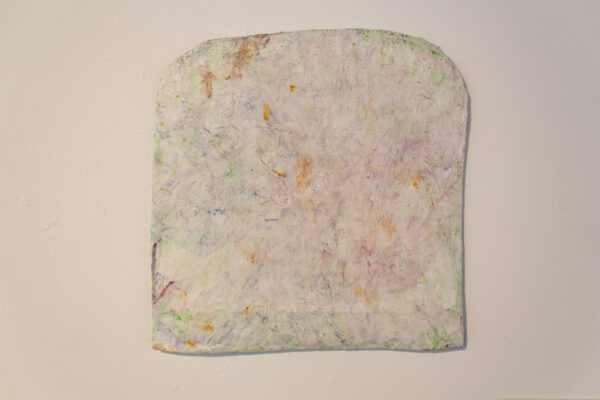 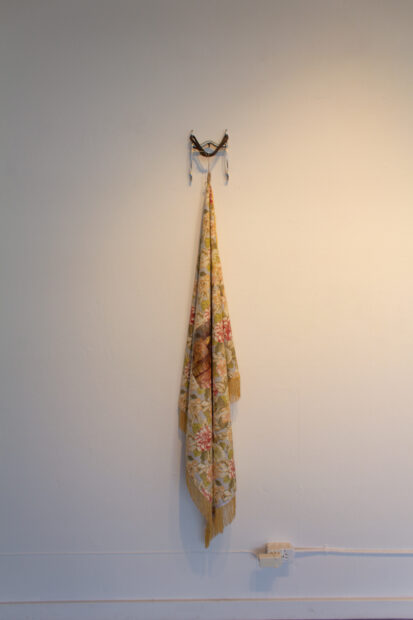 Member artist Randy Guthmiller gave me a tour of Clamp Light Studios. On view was Here’s to Hello, a group exhibition featuring Clamp Light residents — Jose Villalobos, Sarah Fox, Raul Rene Gonzalez, Alethia Jones, Randy Guthmiller, Ursula Zavala, Taylor Galvan, Xavier Gilmore, Sara Corley Martinez and Cassie Gnehm. Studio membership spaces are one of the most direct ways to interact with emerging and early-career artists without mediation from galleries or the art managerial class. Guthmiller, a transplant, had spent time working with the curatorial collective Beefhaus in Dallas before moving to San Antonio. Clamp Light artists show in various capacities across town and beyond. Sarah Fox colored the studio’s entryway space in a design of her cerulean animals for Spring 2020, and Jose Villalobos’ de los otros installation will be at Artpace’s main space through April 25, 2021. 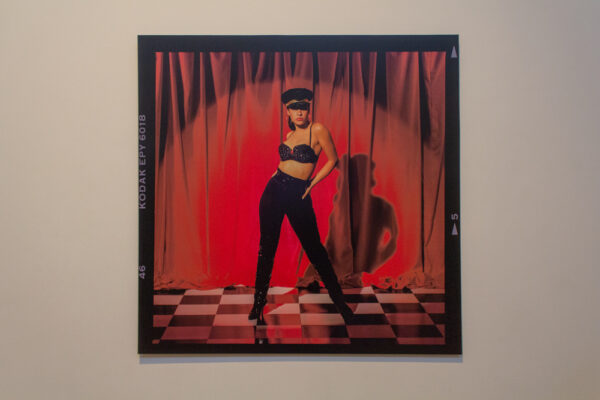 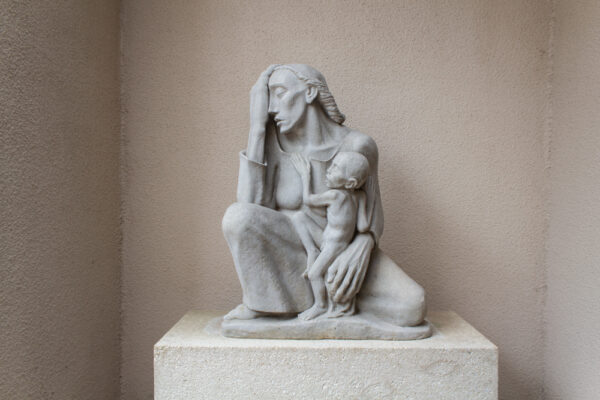 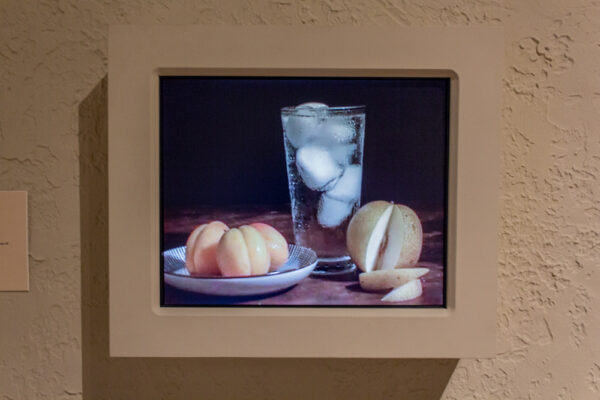 The McNay is open to the public, even as the lawnscape update and next major exhibition are still in progress. The various wings of the McNay amble around a garden, and include a library, a collection of art glass, and plenty of contemporary art. It recalls the idyllic quality of the Philbrook Museum in Tulsa, another mansion-turned-museum. 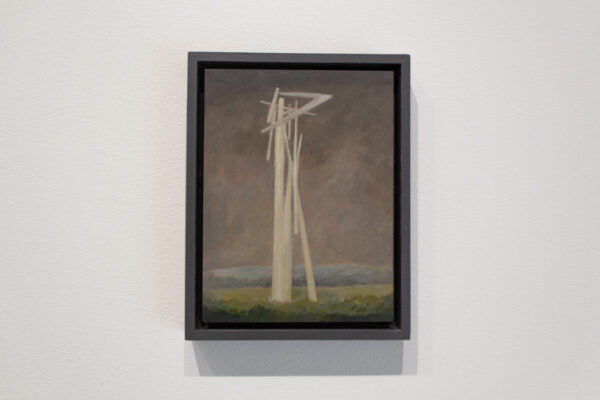 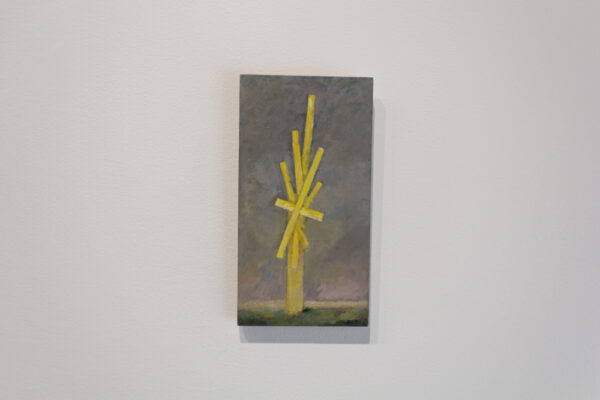 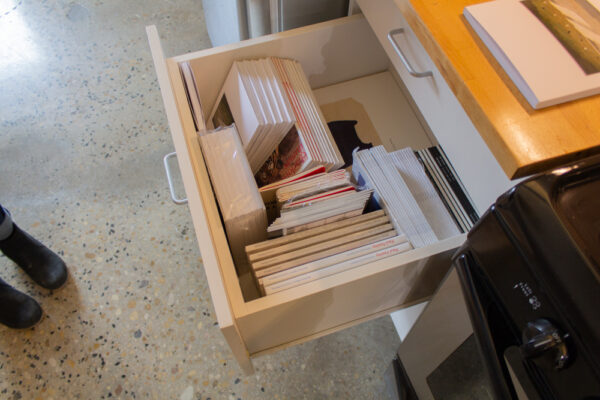 Lawrence Markey is between exhibitions, but currently on view are small paintings of oil on wood panel by Glenn Heim. These pieces are birds-eye views of extra-terrestrial plank bodies, possibly in the moments before they orchestrate a crop circle over some remote stretch of Scotland. Markey relocated the gallery to San Antonio in the mid-aughts, and is known for his roster of national artists and publications. 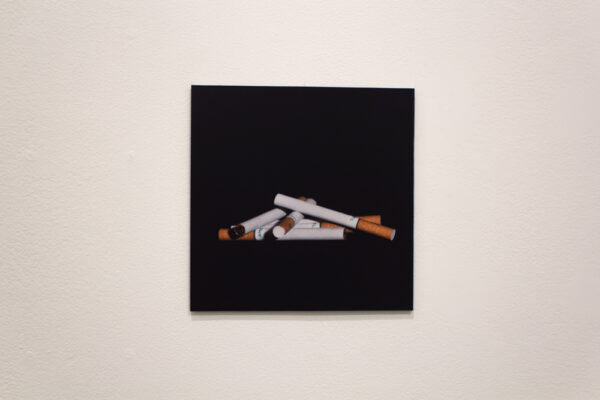 Theresa Newsome: Objects of Aggression showcases photographs of items that played a “pivotal role” in the murders of Black men in the United States. In one photo, a haphazard pyramid of cigarettes, possibly in reference to the death of Eric Garner, who was murdered by chokehold by New York City police in 2014, sits plaintively against a black abyss. The image of cigarettes increasingly reads as a bygone emblem of social currency, especially in the cultural sphere. Newsome’s series is a document of reasonless death sentences and taboos made visible. 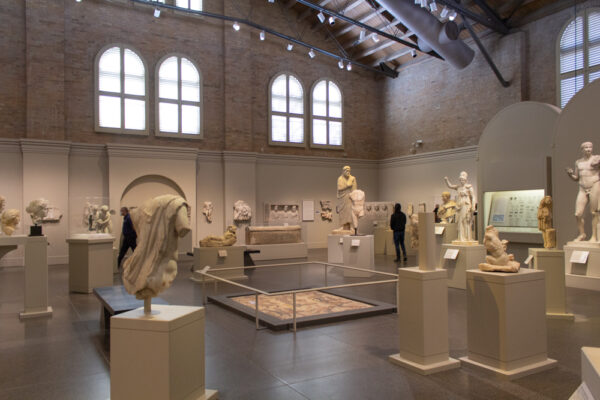 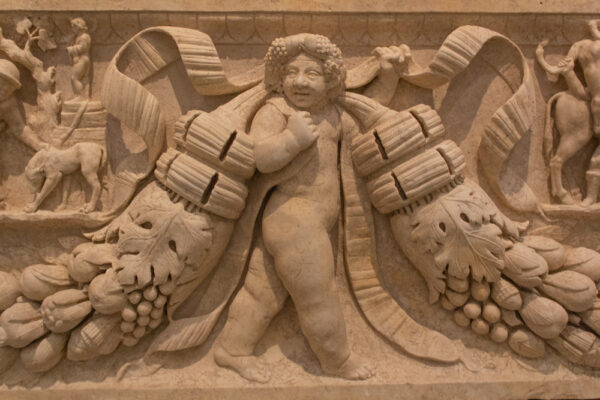 San Antonio is among the oldest cities in America. It has yet to experience the explosive growth of modernity like Dallas, Austin and Houston. In 100 years, the latter set will have nothing to prove to archivists, as cultures and waves of condos replace each other with each economic movement. San Antonio will (hopefully) always have the largest concentration of Spanish colonial missions in North America.

The Gilbert Denman Gallery for Ancient Sculpture at the San Antonio Museum of Art is a room full of funerary artifacts and busts. Antiquities collections are minute dots on the timeline of history, which means that they can be understood not so much as the most significant pieces from the culture of their time, but rather the ones that survived. Seeing such pristine ancient objects after a year of rampant turnover felt grounding in ways I had forgotten possible. Permanent collections sit all across the world, waiting patiently to be remembered while we barrel through newness. 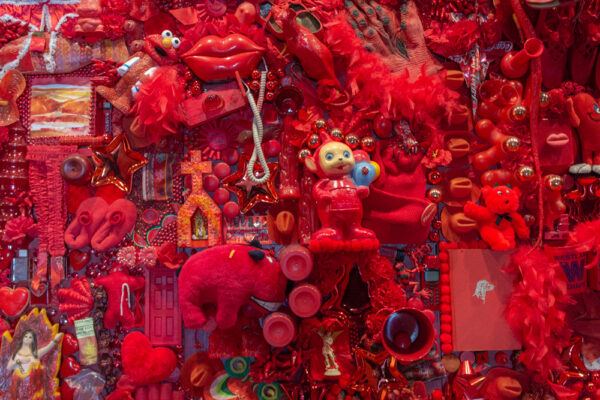 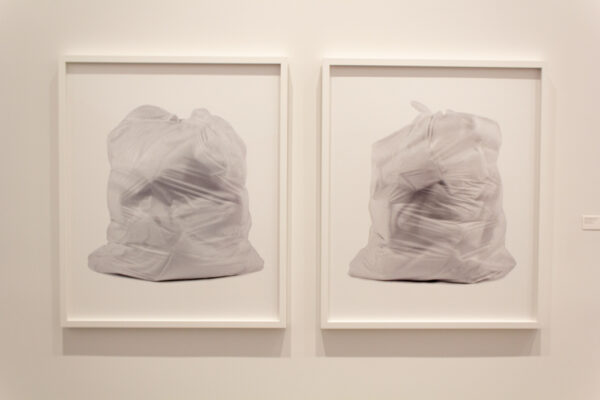 Temporarily closed, Ruby City is also experiencing its own transition. A major power line will be relocated among the fields of dirt that face San Pedro Creek.

The red cast concrete of Ruby City sparkles in the sunlight, as intended. The interior is equally transformative, whisking one away to another place, where plans have been fully realized.

Thank you so much for this tether. So many exciting pieces! Also, I love your description of the permanent collections waiting and our physical energy in relation to ‘newness’. Perfect.