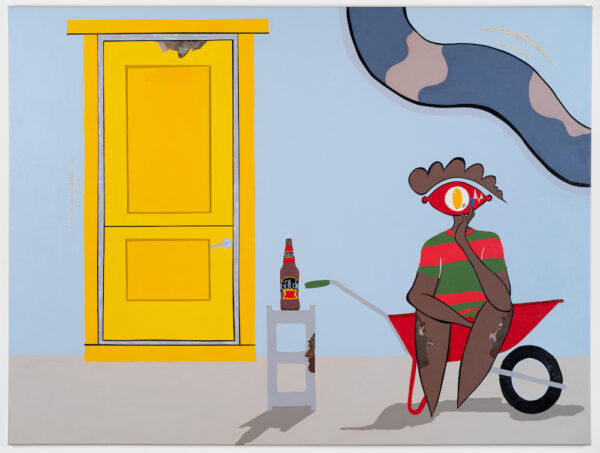 Jeremiah Onifadé, Recushioning With Panadol, 2020. Acrylic and Garri on canvas, 36 x 48 in.

There’s been plenty of media attention around Jeremiah Onifadé’s solo show, Surreal Figures, at Dallas’ SITE131, which is on view through March 27. I’ve never seen a painter so extensively reviewed in the local press. Clearly, Onifadé is not only aligned with the moment’s zeitgeist — he’s also making compelling art.

A public conversation between Onifadé and SITE131’s founder, Joan Davidow, on February 27th, focused on the social and political conditions of the artist’s country of birth, Nigeria. There, a style of retrograde politics has brought suffering to Onifadé’s family, as he recounts, and continual suffering to the wider country. Surreal Figures showcases the visual language he’s developed to exorcise that experience.

The exhibit consists of 13 small- and medium-sized works. Onifadé says only practical considerations have stymied his ambition to make larger work, but the modest dimensions of these pictures match his current mode of storytelling. 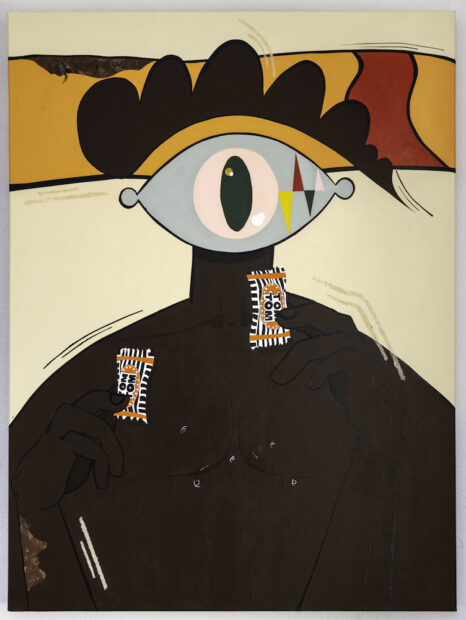 The paintings in this series are unified by a tone and visual language that’s assuredly graphic and comic-book-like. Onifadé’s compositions often use three modes: 1) Onifadé’s own brand of cyclops as the prime, frame-filling figure; 2) a door or checkerboard as a prime figure, or; 3) a group of figures in mediated action, sometimes with the door motif poking in. 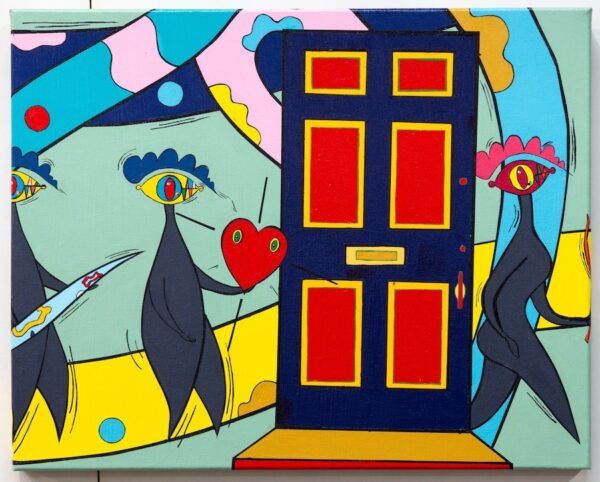 The palette the artist employs has a penchant for dark grays and browns in the midst of a color range evocative of children’s toys — though Onifadé goes far beyond the primary red-yellow-blue that Fisher-Price leans toward. Often, whited-down yellows or paler blues or grays drift into the scene, acting as atmosphere, or filling a room wall, or coloring a stage flat to frame a scene.

These paintings, as he tells it, are about his Nigerian past. He’s not coy about this in conversation, but he is in his pictures. Onifadé’s dramas are packed tight as fish in a catfood tin. To steal a term from surrealism’s psychological source texts, feeling in these pictures is sublimated.

Onifadé says the paintings were launched by harrowing events, but without reading the exhibition notes, that may not be your guess. The Surreal Figures show-title is surely apt, but the imagery doesn’t integrate surrealism of the sort art-watchers think to look for. It seethes with emotion that’s carefully coded; it doesn’t evoke the amusement, discomfort, or terror of seeing our id or self-deceptions laid bare, like Surrealism in its classic mode. Without Munch-ian Scream-isms, Onifadé’s jacked realism doesn’t put creepiness, existential suffering, or cinematic horror in your faces, and it’s not interested in humor, either. Skipping over the last century’s Dali, Magritte, and Yves Tanguy, Onifadé seems to be nodding to surrealist modes from Surrealism’s precursor, Odilon Redon (1840–1916), whose work gained public following in the 1880s. Like Redon, Onifadé’s scenes are more odd than auspicious. The artist isn’t jumping through a department store window to get your attention. These are pageants of restraint. 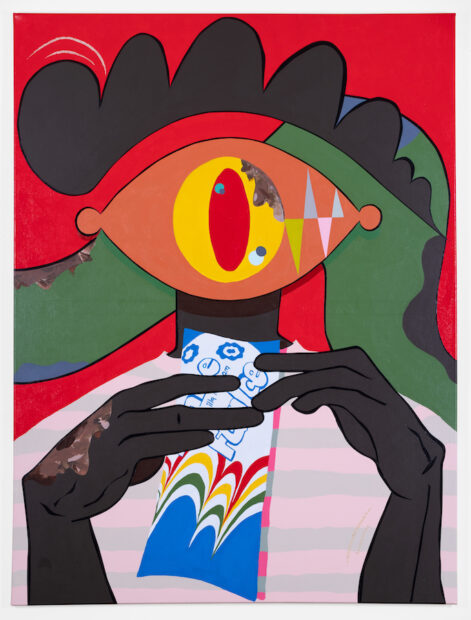 Onifadé’s figures, which in these paintings perform as personal “stock” figures, show spare modeling that’s not wholly Keith Haring-esque, but it’s close. Like the courtly figures of face cards, these beings are black-line-drawn and single-eyed, but, design-wise, they’re arranged more like the superheroes in East Orthodox icons than card decks.

Artists leaning into “stock figuration” isn’t new. Guston standardized it in his work after 1967. We can also point to Dali’s emaciated, shelved torsos, and Magritte’s 22 pics of black-hatted everymen. As attention turned to graffiti artists’ signatures in the Reagan era, the penchant for graphic standardization deepened. Onifadé’s one-eyed fella he calls an “orb” joins Greg Mike’s mouths, KAWS’ “companion,” and Hancock’s “Torpedo Boy” in this pantheon.

Using more psychological language, we can say that the orb displays “low emotional affect.” Be that as it may, Onifadé halos these figures with action lines. These aren’t like the celebrative emanations of Haring or the dark thrusts speaking of speed set down by Jack Kirby or other kings of comicdom. Onifadé’s score marks seem to hang halfheartedly in space — as if a kitten had clawed disinterestedly at the air before turning away. Some tableaus suggest movement in other ways, but these dramas shout immobility, as if these inhabitants are stilled by distraction, self-consciousness, or fear.

Onifadé’s single-eyed orb owes a lot to the cyclopian obsessions of Redon, if not to the artist himself —with his wide-eyed look and emphatic black spectacles — and he confesses of the autobiographical relationship. 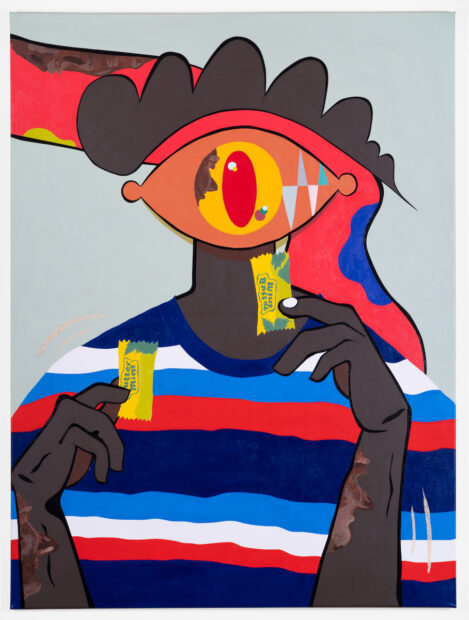 Jeremiah Onifadé, Portrait of a Young Boy With a Faltered Smile, 2020. Acrylic and Garri on canvas, 48 x 36 in. Courtesy of the artist.

In Onifadé’s universe, a checkerboard or the candy-bar wrapper held by an orb, as in Portrait of a Young Boy with a Faltered Smile, is symbolic of Nigeria’s class divisions (because the grade of candy you accessed in Nigeria was roughly indexed by income), and the face inside an arm is suggests a surveilling government leader. A rigidly-staring eyeball is a sign of a consciousness frozen into the observational mode. 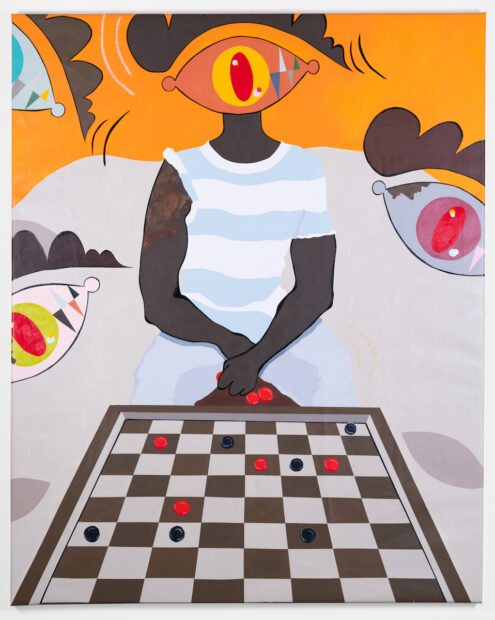 Duchamp posed for portraits behind a chess board to convey that art and life are just games. But when a striped-shirted orb faces the viewer across a checkerboard in Midday Sun, the scene is drained of delight; as Onifadé tells it, this is a memorial. His grandfather played checkers in the public square when Nigeria was at peace. When civil unrest erupted, common space became unsafe. The absent checkerboard players became a sign that a happy normalcy had fled. 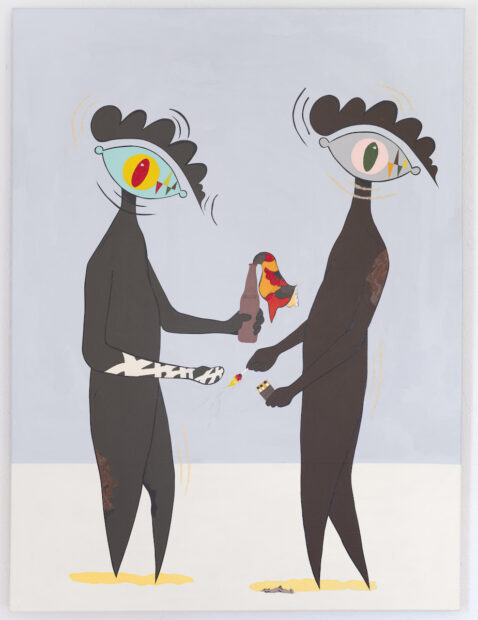 Why do these pictures of a cultural drama so contained by a country 10,000 miles away compel us? Onifadé’s genius is that he’s found an off-kilter economy of means that encodes the unresolved traumas of a nation and a biography. He uses a Fisher-Price palette to keep the message light; he wants to keep the gallery-goers looking. He paints figures without feet to show an ungrounded mode of political resistance. Even though, in Barnawa Is Now On Fire, we see two orbs igniting a Molotov cocktail in an act of street-savvy violence. Why do orbs lack mouths? They’ve not found voices to speak against a social system that resists their personhood. 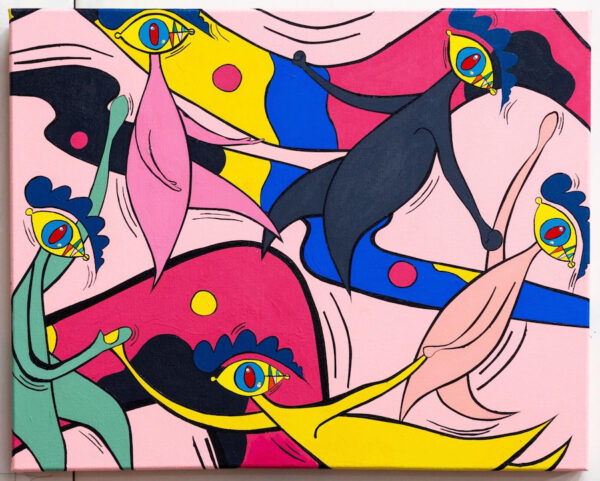 Onifadé’s dramas compel us because he’s done his homework. He’s a rapt student of world and art history, and his canvasses reflect an integration of cultural languages and visual traditions. Aside from astute use of the cartoon lexicon, stock figuration, and the idylls of surrealism, we get direct pictorial quotes: A Night of Good News is his translation of Matisse’s The Dance (1910), and his The Joy of Life (1905), which is its own dense compendium of recent art history, borrowing iconography from Cezanne, Ingres and others. Onifadé’s Percussionist quotes wrestling figures from Greek vases — and opens a window into other mythic spaces Surreal Figures play in.

Though not technically a refugee — Onifadé is an American citizen — the dangers of life in Nigeria drove him here. His tells of a life that still sits between those two social worlds and a sense that he remains en route somewhere — like Odysseus, whose encounter with the Cyclops is a chief sub-story of his adventure. It’s easy to forget that Odysseus’ cyclopian antagonist was one member of a race and that his name, Polyphemus, means “many-seeing.” Onifadé art “sees” in many modes. It looks into social and personal realities, it looks into past and present, it looks into African experience with an occidental vocabulary. The artist seeks solace as a public citizen and a private soul, both in this world and outside it — both isolated and engaged, like the saints in the icons his pictures evoke.