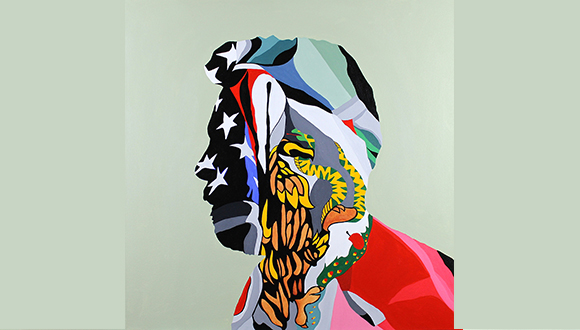 “Both Garza and Macias recontextualize religious, political, and pop culture icons as a means of exploring Hispanic culture unique to South Texas,” says Elena Rodriguez, Curator of Exhibitions for RCA. “These motifs define what it means to identify with more than one culture and how that affects the artists’ views of the current socio-political climate.”

Sacred Americanx works will be viewable and for sale both in person and online at rockportartcenter.com. The month-long event, which is free and open to the public, will kick off Saturday, Sept. 12, with a reception from 4–6 p.m., with a maximum of 70 attendees admitted at one time in the galleries. All attendees, including visitors, staff, and volunteers, are required to wear face masks and maintain social distancing.

Information on the artists via RCA:

Born and raised in Brownsville, Texas, along the U.S./Mexico border, Alejandro Macias says he often thinks about the conflict and merging of two cultures, incorporating into his paintings conceptual ideas representing the struggles and dangers of the assimilation process, which can be seen as an erasure of history, heritage, and culture. He also draws inspiration from many Chicanx activists and artists who have addressed and propelled issues of identity, repression, civil rights, immigration, and cultural misconceptions to a broader audience. His most recent paintings bring to light a number of topics that not only reflect his own humanity as a Mexican-American, but also a wider range of borderland, Latinx, and contemporary societal issues.

Macias has exhibited nationally and internationally including forthcoming exhibitions at the Visual Arts Center at the University of Texas at Austin, Mexic-Arte Museum in Austin, K-Space Contemporary in Corpus Christi, and the Tucson Museum of Art.

Amorette V. Garza draws from personal experiences and memories, including her cultural heritage and religion — specifically Catholic imagery and iconography — to “re” create sculptures from found objects. Using traditional materials such as wood and steel, to the more temporal such as paper, even candy and gum, Garza manipulates existing objects to be seen in a new light. The use of found objects is an important aspect to her work, not only as a form of environmental conservation but also as a way to demonstrate how our stories overlap and are connected, including mixing of cultures, religious symbolism and secular imagery. The concept of Dia de los Muertos (Day of the Dead) is most influential in her recent series of work, including found object figurines of people and animals,  which are altered with additional elements, including their drawn or painted or skeletons, representing that we are physically the same underneath and it is our spirit and memory that lives on.

Garza’s work is included in the collections of Cheech Marin, Michael Manjarris, Paulette and Max Kluge and The Art Museum of South Texas.

Rockport Center for the Arts is located in downtown Rockport at Estelle Stair Gallery, 406 S. Austin Street. Hours of operation are Monday through Saturday from 10 a.m.–4 p.m. Admission is free. Visit rockportartcenter.com, follow RCA on Facebook, or call (361) 729-5519 for more information.