[Sponsored] V….Vaughan at Rockport Center for the Arts and Rockport Art Festival 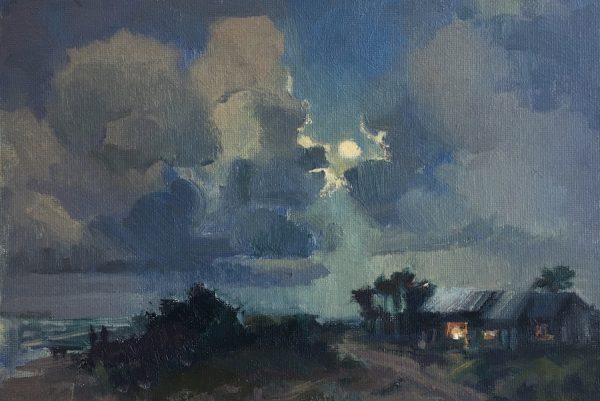 Please note: As of June 26, the Rockport Art Festival has been cancelled and will not be rescheduled this year. The RCA auction, however, is still on.

Sometimes we imagine Impressionist art as benign, perhaps an antiquated art form gracing antique stores and grandmotherly houses. But for those of us armed with art historical context, we know that Impressionism has revolutionary roots in terms of the subject matter it engaged with in its time — like plein air and prostitutes, to name a couple — as well as its steering away from classical painting and veering toward abstraction. Rarely, however, do we associate Impressionism with religiosity and faith. Yet, this is V….Vaughan’s trajectory, how she relates her faith to the world around her and how she connects notions of the sublime.

Vaughan’s Christian faith is grounded in a manner of concrete logic: the fundamentals of everything we know is ultimately grounded in the unknowable (at least for now). For example: we know light is simultaneously a wave and comprised of particles, but we don’t know why. We have a slew of evidence that the Big Bang happened, but we don’t know why or how it occurred. Vaughan’s penchant for Impressionism follows a similar logic; what lies at the core of our senses and experiences is not necessarily what we directly observe, but rather the sense of wonder and profundity that underlies everything.

What begat Vaughan’s early art career as a technical illustrator was her ability to render objects with photorealistic precision. Proficiency, perspective, proportion, value, and accuracy fueled her art making and sense of drive. At that point, for Vaughan, the more the object appeared the way it does in real life, the higher the quality of the work. 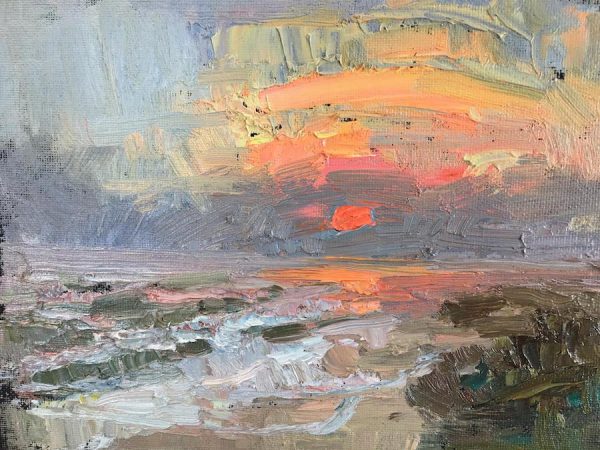 It wasn’t until she began introducing color that her modus operandi began to shift. As her observations began to lend more priority to the interplay between hue, value, and intensity, Vaughan found that light and color are inextricably linked. It was from this revelation Vaughan took a paradigmatic shift, from merely representing something as it appeared to imbuing it with a truly felt experience. A painting of a farm, for instance, is no longer just an accurately rendered farm, but also a place that echoes of longing, distance, and memory. Vaughan adopted a more Impressionistic style to better deliver the way our experience of light and color informs our perception of a place. 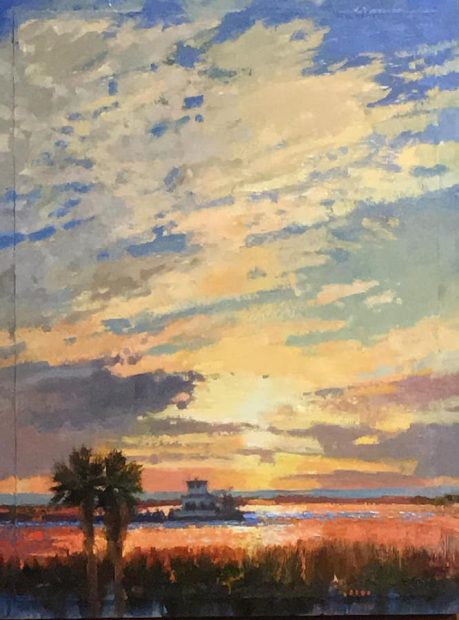 Vaughan’s plein air subjects derive from all over the U.S., but she gravitates toward the countryside lining the Texas coast. So it’s no wonder that her work would be selected not only for a solo exhibition at the Rockport Center for the Arts (RCA) in Rockport, Texas, but also be featured as the poster image for the Rockport Art Festival. Says Elena Rodriguez, Curator for RCA, of V….Vaughan’s painting: “Her work is so iconically Rockport. I can look at one of her paintings and know exactly where it is in town, and I feel at home. Even non-locals will appreciate the serene nostalgia of a V….Vaughan painting.”

Notably, Vaughan’s exhibition will be RCA’s first featured show following its May 1 reopening, after it closed temporarily in response to the COVID-19 pandemic. Opening on June 19, the show runs through August 1. The opening reception will take place on June 20 from 4-7 PM,  and will include a public unveiling of the piece to be featured as Rockport Art Festival’s poster art, a poster signing, as well as an artist talk.

Vaughan’s painting that inspired the poster design will be for sale as part of the live Summer Art Auction 2020, which takes place on Thursday, July 2, which kicks off the Rockport Art Festival. In accordance with social distancing guidelines, the auction will include an online element, and also be on location at RCA’s Estelle Stair Gallery. The online auction will go live June 19, and is available through rockportartcenter/liveacutioneers.com. For the festival weekend, in addition to the poster signing during the opening, posters will be available for sale in the gallery. 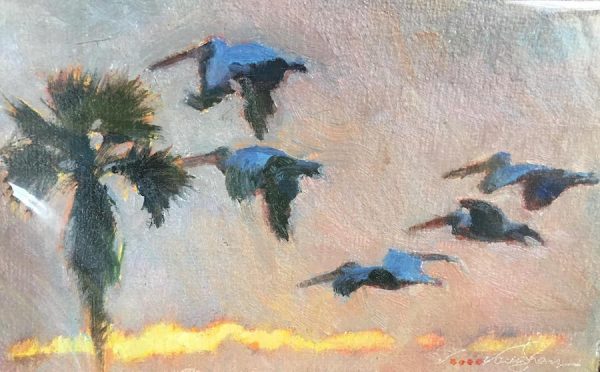 The Rockport Art Festival is a large, longstanding annual tradition within the Rockport community. Running since 1969, it has a national reach, with its juried show including 125 artists from across the United States. It has proven resilient even through the COVID-19 pandemic, as its two-day event will continue as scheduled over the July 4th weekend, although it will be modified in order to adhere to state and local guidelines. Luis Purón, executive director of RCA, says of the adjustment: “Our staff has been working hard to modify the event in terms of COVID-19 to make it as safe as possible while retaining the artistic variety and quality attendees expect. We will strictly comply with guidelines provided by state and local government entities, including occupancy rules. While we generally host 10,000 or more guests during the festival weekend, we are estimating 2,000 guests over the two days this year.”

Indeed, the festival modifications are thorough. All tents will be rearranged and spread out over the grounds, which span a vast 160,000 square feet. There will be a minimum of ten feet between booths on all sides. Although the festival will forgo the traditional gathering spaces — specifically the live entertainment areas and the children’s activity and food tent — there will be a food truck court with a socially distant and limited seating area that will be regularly cleaned. Multiple festival entry points have been cut down to one in order to keep track of attendee numbers. Portable restrooms will be cleaned regularly throughout the weekend. Festival hours are 10 AM-6 PM on Saturday, July 4th, and 10 AM-5 PM Sunday, July 5th.

Despite modifications, RCA insists that quality is high and an abundance of options are available. Over the years, attendees have been able to view and purchase excellent pieces spanning a variety of media including painting, ceramics, jewelry, woodwork, glasswork, metal, and furniture.

For anyone over the age of 13, single day passes are $5 (children twelve and under are free). Two day VIP passes are also available for $20 apiece, which allows for early access into the festival, beginning at 9 a.m.

The Rockport Art Festival will be located at the Festival Grounds at Rockport Harbor — 100 Seabreeze Drive, adjacent to Rockport Beach Park and Aransas Bay.