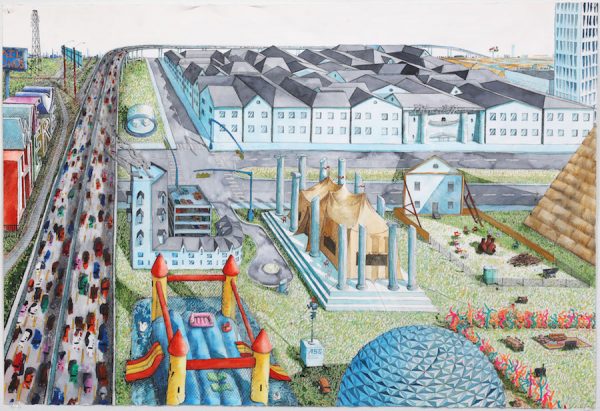 Though he has shown work internationally and been called a “ferocious talent” by the New York Times, Houston artist Daniel Heimbinder decided some years ago to focus on art work rather than art world. That preference for mark-making over scene-making is why he’s one of the city’s best visual artists and also why he’s not one of its best-known. Having long been a friend and a fan of his work, I’m compelled to shed some light on the unusual, rigorously conceived, and painstakingly crafted trio of large-scale drawings that comprise Heimbinder’s upcoming exhibition So It Will Be, opening this Friday at Art League Houston. I’ve witnessed the evolution of this body of work at various stages over the better part of the past decade, and I recently visited Heimbinder’s studio to see his progress and talk with him about the culmination of this long project.

In general, his drawings and paintings have been concerned with a sort of perversion of symbols and situations into darkly satirical combinations. His solo show Magic Island last summer at Rudolph Blume Fine Art/Artscan Gallery in Houston featured mostly Houston-themed drawings, and was perhaps the best love letter to and condemnation of this city I’ve seen. Besides activating Baroquian mash-ups of characters, signs, buildings, and other imagery recognizable only to Houstonians (one of my favorites involved the smiling wiener mascot of Houston’s James Coney Island hot dog chain), that work also conveyed an approach and sensibility that could seemingly only spring from the mind of someone raised in the eclectic, sprawling, grand, and haphazard collage of “clutch city.” 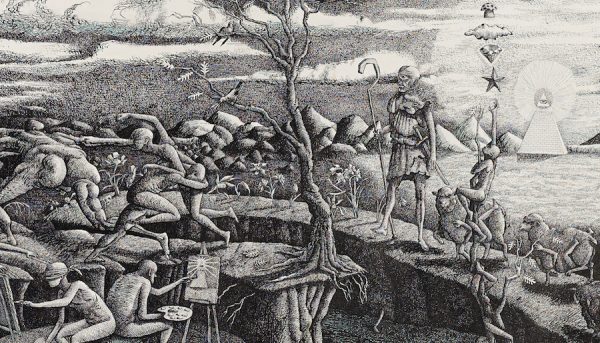 Daniel Heimbinder, So It Was (detail)

But there’s this other stuff that he’s been working on here and there, returning to, toiling on, for years now. I’ll call it his So series. This trio of drawings represents an evolution in Heimbinder’s work to a much bigger scale, both physically and conceptually. More than eight feet in length, each of these large and intricately detailed ink and watercolor drawings on paper are epic experiences in and of themselves. First with So It Was, then with subsequent pieces So It Goes and So It Will Be, Heimbinder has taken his process of absurd narrative reorientation into the territory of deep existential inquiry and all-encompassing societal critique. He has connected and hybridized a vast number of myths, fables, folk tales, symbols, scenarios, thought experiments, games, and visual tropes here in order to reveal something about the nature of humankind’s stories — and further, something of the fallacies of our narrative tendencies. 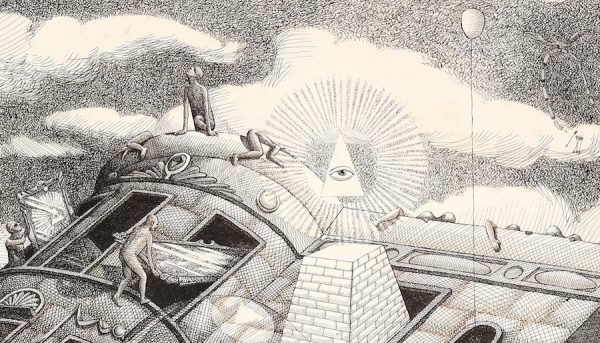 Daniel Heimbinder, So It Goes (detail)

Heimbinder described these signifiers to me as “the scaffolding for all of human understanding and accomplishment,” and he explained that his works are in some ways illustrations of the mind clumsily struggling with the confusion of these conflicting nuggets of narrative shorthand we use to understand larger concepts. He has created complex combinations of our oversimplifications here, and points to their precariousness. It’s not necessary, and likely not possible, to identify and unravel all of the many historic and contemporary references that he has repurposed and reconfigured within these works, but I think it’s helpful for the viewer to know that they are there. In droves. Symbols and situational devices from across time and space. Tropes on tropes on tropes. 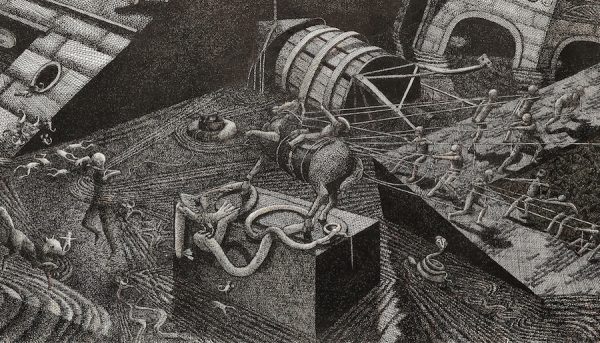 Daniel Heimbinder, So It Goes (detail)

The three works in the series depict a chronology of visions, which I loosely think of as ancient, more recent, and right about now. While the first two depict fully weighted, interconnected landscapes, the final piece presents fragments floating in a void. Islands of disconnected ideas and disproportionate imagery are suspended in negative space like pattern illustrations on some kind of dystopian French toile fabric. It’s a fitting progression. This broken landscape of self-involved cluster-narratives reflects our contemporary culture scarily well. This is the unmooring that we’re in right now. It’s a world of interchangeable reflections and doubles, mixed metaphors and perpetual motion machines. It’s the Schrödinger’s cat of Mad Magazine Fold-Ins. That is to say it expresses an impossible simultenaety of false dichotomies. Both this piece and the exhibition are titled So It Will Be, framing the trio by its final chapter’s perspective and suggesting a scorpion’s–gonna–sting inevitability for the future. (Though I’d like to think that conclusion is an oversimplification.)

Daniel Heimbinder, So It Will Be (details in progress)

The titles of these pieces originally sprung from a reference to the refrain “So it goes” in Kurt Vonnegut’s Slaughterhouse-Five, used to punctuate death and mortality. I think it’s worth noting that during the time that he was slowly creating these intricate works, Heimbinder both lost his father and himself became a father. In our recent conversation about the work, he brought up Ernest Becker’s Pulitzer Prize-winning book Denial of Death, which proposes that all of human civilization is an elaborate, symbolic defense mechanism against the knowledge of our mortality: “We’re the only animal that knows of our own mortality, and if we thought about it all the time we wouldn’t be able to function. So we have these stories. It’s our ability to compartmentalize and form these narratives that make us seem sane and functional.” These constructions are the carrots that we dangle in front of our own noses in order to keep going. Heimbinder’s work, for better or worse, reminds us that we’re deceiving ourselves. 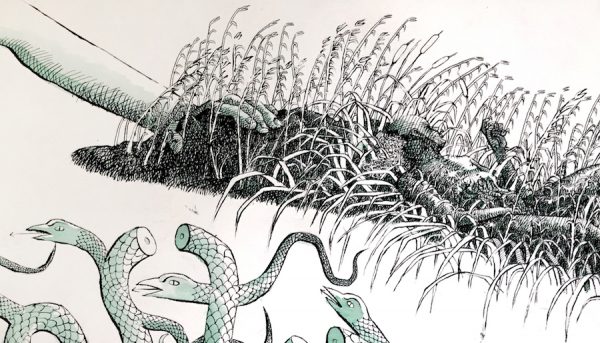 Daniel Heimbinder, So It Will Be (detail, in progress)

It’s rare that an artist invests so much of his life in the creation of a body of work, and takes so seriously a rigorous interrogation of the nature and history of human understanding, language, and representation. The Art League show will be the first and only time all three of these pieces will be shown together in one space, as two of them will go to private collections in different cities afterwards. I’m excited to visit So It Will Be repeatedly during the run of the exhibition, and I encourage folks to go and look deeply, explore freely, and to notice dialogues between recurring and morphing elements across the different pieces. It’s never been more important to re-evaluate oversimplified narratives.