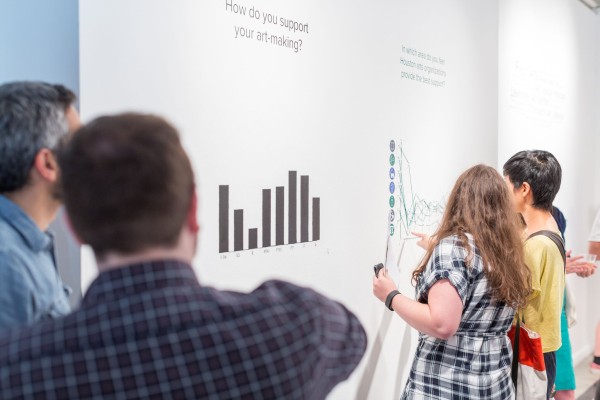 Michael McFadden’s presentation aesthetic][equity in Art League Houston’s Hallway Space is less an art exhibition than an education center. In the exhibition press materials McFadden is described as a writer and organizer rather than as an artist. So, rather than critique McFadden for not being Velasquez, I’m comfortable engaging with his presentation on the basis of its political ideas rather than mourn the visual paucity of the experience.

McFadden’s presentation is comprised of a series of hand-painted charts, graphs and proposals for the regulation of art production. There is also a bookshelf of recommended reading including 9.5 Theses on Art and Class, a circa-2009 semi-Marxist manual by critic Ben Davis on how to convince stubborn, independent-minded artists that the collectivization and institutional regulation of art practices is a good idea.

Opposite the bookshelf, an information station is installed where artists can fill out a card with their name and job qualifications. The information on the cards will be added to a worker-for-hire database accessible by various Houston arts institutions. Also on view is a wall text describing e-flux’s Time/Bank project and an installation of The Artist’s Reserved Rights Agreement, an artists’ rights contract drafted by New York lawyer Robert Provjansky in 1971. 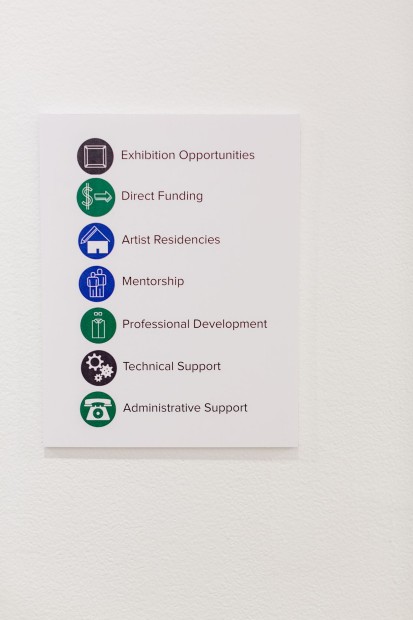 McFadden’s central thesis—mirroring Davis’ 9.5 Theses—is that government regulation of art production is necessary to counteract the financialization of art in the last 50 years whereby art objects supposedly lost their symbolic value and become mere financial instruments. In the exhibition brochure McFadden rather eerily writes that his project is to “…examine the effect of reliable, authoritative measures such as industry regulation and systemic conformity as a counter-weight opposing the dominant contemporary art economy.” Ben Davis writes in thesis 8.2 that: “Above all, private capital has a disproportionate influence on the visual arts; therefore, increased government funding for arts institutions can have the effect of reducing the intensity of the contradiction facing the visual arts.”

Authoritative measures? Systemic conformity? Increased government funding? Am I the only one who thinks this sounds terrible? At the heart of both McFadden’s and Davis’ directives is the seemingly noble desire to make life fair for artists. Artists are unable to devote enough time to their studios because they spend too much time working multiple, low-paying jobs. McFadden contends that artists deserve better. So with the help of the Art League he has gathered data about what artists would like from their local governments, galleries, museums and non-profits. 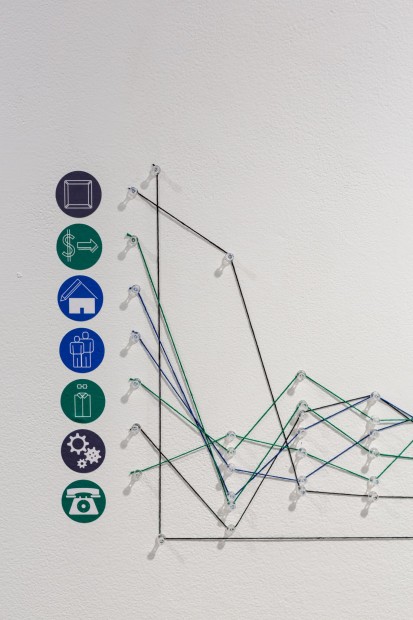 In order to accept any of the projects and proposals in aesthetic][equity you must first accept the premise that artists deserve to make a living making art. They don’t. This world is one of toil and trouble. Some people weld iron girders together at high noon in the deadly Texas sun. Others lay asphalt or work in convenience stores or change old people’s diapers. These same people also express themselves creatively in redneck honky-tonks, sparkling Latino dancehalls and pulsing hip-hop clubs. They create sexy, outrageous fashion from Salvation Army cast-offs. They write. They draw. They read. They cook. Nobody grants them the “right” to do it and they don’t get paid for it.

Art flourishes even in prison. Convicts sell art to get what they need from the canteen. And prison art isn’t all clowns and tits either. Inmate Ronnie White writes: “I know deep in my soul I have the makings of a master in my blood. I realize this because when I’m working sometimes I get these excitable feelings like I’m really on to something. The path is easy to follow. It’s not my mind that gives me these messages, it’s my soul.” I’ve always found it condescending and dangerously authoritarian when bourgeois intellectuals try to make the case that people need government to help them creatively express themselves. It’s called culture and people build it for themselves in order to survive.

The artist in contemporary society deserves no more privilege than that afforded Ronnie White or the people born into the south Dallas trailer parks where I used to deliver pizza. Poor people know that life is hard and struggle is constant. The only thing the artist deserves to lay claim to is what he can get by fighting, scheming, begging or borrowing. This is the only way artists can tell the truth in our current social environment. If you target your work to some idea of the capitalist market you’ll make decoration. If you target your work to political institutions you’ll make propaganda. Making money from art borne out of real creative expression when the rest of the world does it for free is a privilege, not a right. 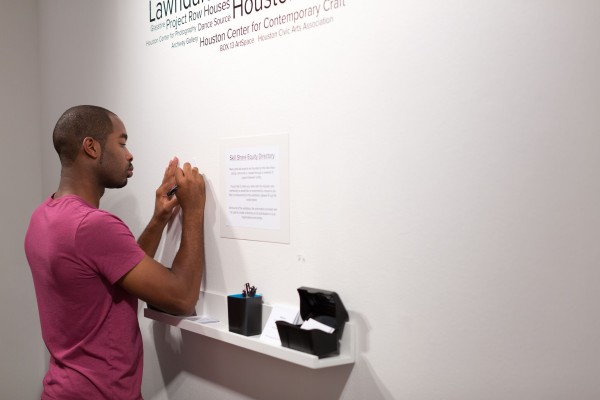 In 1945 the Russian expatriate writer and critic Isaiah Berlin, who had witnessed the Bolshevik Revolution when he was 11 years old, wrote a memo from the British Foreign Office titled The Arts in Russia Under Stalin. In it he described the Soviet art world he witnessed during a diplomatic trip. Surprisingly, his picture includes a huge number of young, well-paid writers who produce massive amounts of party-line literature at a dizzying pace. He also describes a voracious public who, denied the pleasures of mystery novels, romances and other Western garbage, eagerly devoured the “pablum” produced.

The artistic party line is, as Berlin writes, that “organized material progress is still regarded as the foundation on which all else rests; and if intellectual and indeed civil liberty is considered to hamper or retard the process of transforming the Soviet peoples into the nation best equipped to understand and cope with the technologically new post-liberal world, then these ‘luxuries’ must be sacrificed; or at least temporarily shelved.”

Thesis 9.5, the last of Davis’ theses (and the organizing principle around which McFadden has organized his exhibition), reads:

“It is towards…a perspective…which involves changing the material basis of society, that anyone who cares about art should turn; in the absence of such a perspective in the sphere of the visual arts—which, as of now, does not exist in any deep way—art will turn in circles, responding to the same problems without ever arriving at a solution; its situation will remain fraught and contradictory; its full potential unrealizable.”

I find it disconcerting that we still have intellectuals looking for final solutions. We’ve been here before. History is not progressive. It’s hardly even linear. Human beings are not perfectible. The fallacy of the assumptions underlying McFadden’s project and Davis’ theses is made plain by 5,000 years of human art and culture. Every civilization in every epoch has taught us that the burdens of being a conscious human being recreate themselves anew with each new generation. Life is fraught, contradictory and turns in endless circles. So too does art. Anyone who tells you otherwise wants in your pocket or at your soul.

I’m not sure I understand. Surely there is a a big middle ground between Soviet-style art commissars (with show trails, gulags and insane asylums for those who fail to conform) and the laissez faire world where if you fail to make art that sells, you have the freedom to starve. I don’t think McFadden (or Ben Davis) is advocating for the former, which seems to be what Bise is suggesting. Personally I have no problem with, say, a guaranteed minimum income for artists, but I don’t see why it should be limited to artists.

I most certainly am not suggesting that folding into full organizational or governmental regulation of the arts is the best or final solution. It seems, though, that Michael has misunderstood my thesis. While I value the insight that Davis provides, I don’t fully agree with everything he writes and have my own opinions (that grow and evolve regularly) on capitalism, the art world, the non-profit system, etc.

The section(s) of the description and exhibition that Michael has pulled from are indeed stark and can be very intimidating, but as it states, the intention is to “examine,” not necessarily recommend. My interests (outside of my program – which is more focused on the organization than the artist) lie in these issues because I do believe that artists have certain rights. I also recognize that there’s a very wide and drastic range of opinions on what those rights might be. Michael represents here some opinions I’ve heard while others are more interested in establishing and protecting rights. Even within the former, people still express a wide variety of views on what those rights are or how they could be established.

Parts of this conversation arose in discussions of the artist’s contract when some artists weren’t interested in the fiscal aspects of it but wanted the right state how their work is displayed. It’s interesting to me because this document is fairly flexible, and artists have access to tech that could help them to (should they wish) overcome some of the criticisms presented in the 70s and 80s. One method for one aspect would be regulation by an entity, but an alternative is self-regulation, which would require more diligence.

The description states “aesthetic][equity provides an opportunity to reflect on this duality of values by honing in on the Houston art scene and broadening out into the larger art world. The exhibition allows the public to learn of the tribulations of the art world, ruminate on the value of art and artistic labor, and respond.” Rumination and response are the core takeaways I’d hoped for in constructing this exhibition. I’m happy that Michael has responded here and hope that he continues to meditate, reflects on the aspects of the exhibition that are not mentioned, and continues to discuss them.

I’m pretty suspicious of the romanticizing of economic distress here, and the equating of all forms of creative activity…

I’d echo Robert’s sentiment that this binary seems a bit extreme. Sounds kind of like the argument that single payer health care can never work because Greece. Maybe it’s worth mentioning that before Stalin mandated socialist realism, the Soviets had a hybrid private/public film industry that supported an internationally recognized avant-garde that changed cinema forever?

Just throwing one more thing out there: It seems like there’s the potential for an interesting conversation about art and economics between this and the Meow Wolf article Rainey recently published (and by extension, the article Ben Davis wrote that was referenced in Rainey’s.)

In the summer I guess they show art writers and not artists. I like the idea, I just don’t see why this hallway didactic had to be exhibited as art, and why bise is reviewing it at all.

This is maddening and soul crushing I am done applying to these spaces all they want to do it talk, visual pleasure is an afterthought.