What Sterling Ruby’s Got Here is a Failure to Communicate 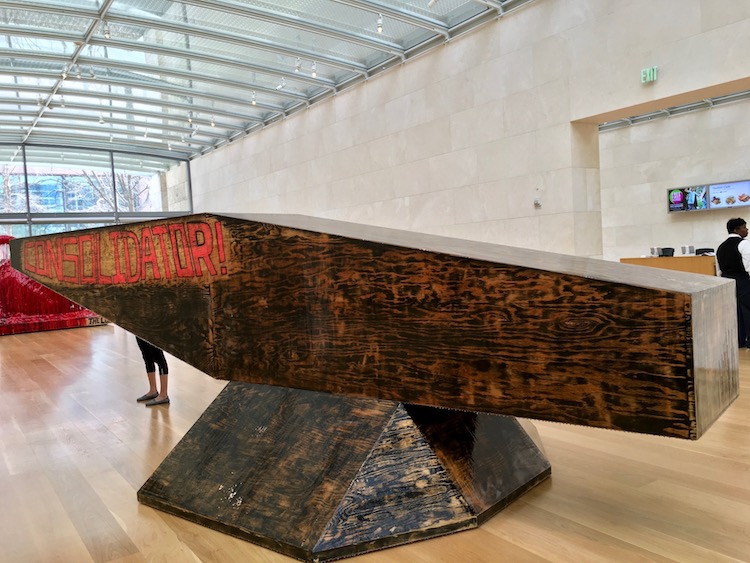 I struggle with Sterling Ruby’s work, but the struggle seems futile, given there’s so little to sink one’s teeth into. Expecting too much from him is like expecting nourishment from a Big Mac. Ruby makes cool-looking art, no doubt. Cool Shit. But I think his impulse is mostly limited to that — making cool-looking shit — and so I’m often mystified by his seemingly unchecked success. I tend to favor art that, even in the smallest gesture, can unfurl layers of nuance and potential interpretation. Ruby makes big things that are friendly, loud, un-tortured, and, I think, unintentionally dumb. The angst, or ‘angst,’ feels forced or piped in, as an afterthought. As mega-gallery, mega-collector material, his work isn’t particularly credible. I’m not buying it, in every sense of the phrase.

His current semi-retrospective of sculpture at the Nasher Sculpture Center in Dallas is curated for maximum visual punch: the show is a muscular assortment of monochrome monoliths; drippy gothic things that tower over your head; jutting appendages and thick, glistening surfaces. Like craving McDonalds and a Katy Perry tune on a road trip, sometimes we crave the equivalent of junk food or a pop song from our art. Ruby fits that bill to a T, and this show is truly okay exactly on that level, at least while you’re surrounded by it. But its impact on your consciousness evaporates the second you leave the museum. That is, unless (like me) you spend the next three days trying to figure out why nothing about the show has stuck with you. I think the greatest hits of an artist who works this hard and attracts this much attention should loiter in your brain and soul for a while. They should upend your world at least a bit. 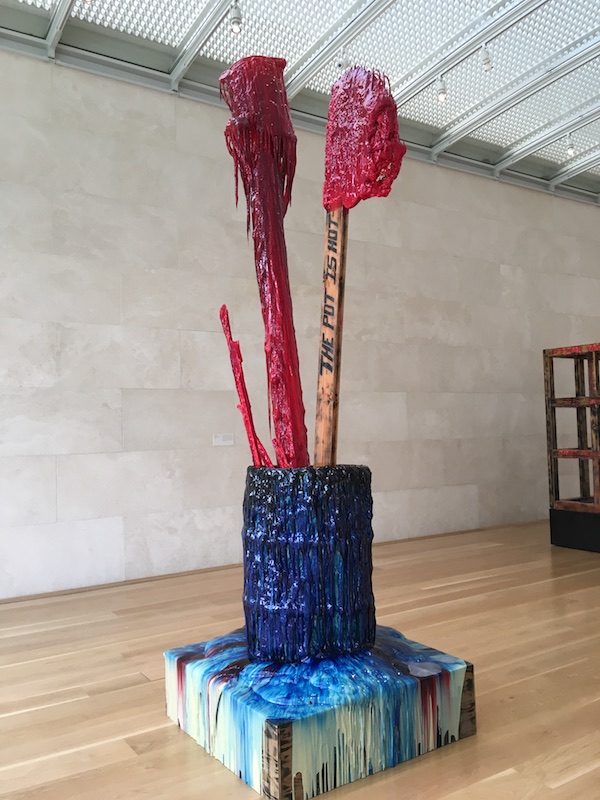 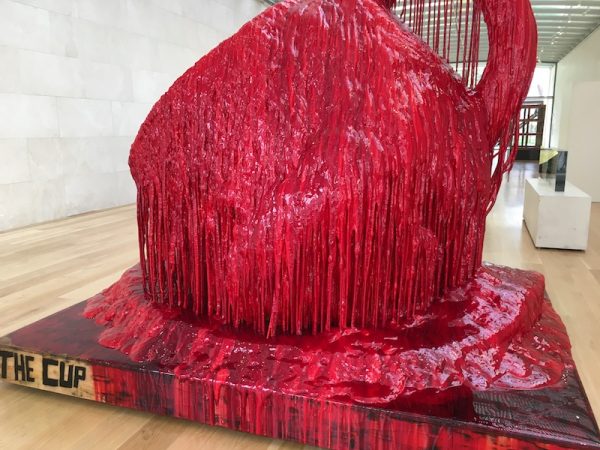 Ruby makes a lot of these big, now-famous things, but he has a tendency to undermine individual works with juvenile or ostentatious touches: dozy text additions to pieces that would be more open to layered or complex interpretation without it, or ‘ironically’ grandiose titles that undo whatever interest you were working up to when first encountering the piece. I was admiring a work in show titled Inscribed Monolith, from 2006, with its burnished white surface and a cheeky, messy graffiti scrawl of the word ‘orgy’ on one side — and I thought, Great, now we’re cooking with gas — but then I turned the corner and on the other side was the same cheeky, messy graffiti scrawl, but this one reads ‘jail.’ Really? ‘Jail’? Sad trombone sounded in my head. He blew it. No pun intended. Ruby is, after all, a skater-fashion-farmer-dude turned mellow LA artist whose brushes with the law are probably limited to parking tickets. Like I said, I don’t quite believe this guy, and I get no sense of what drives him, or haunts him, or electrifies him, other than a really admirable work ethic and a desire to please. 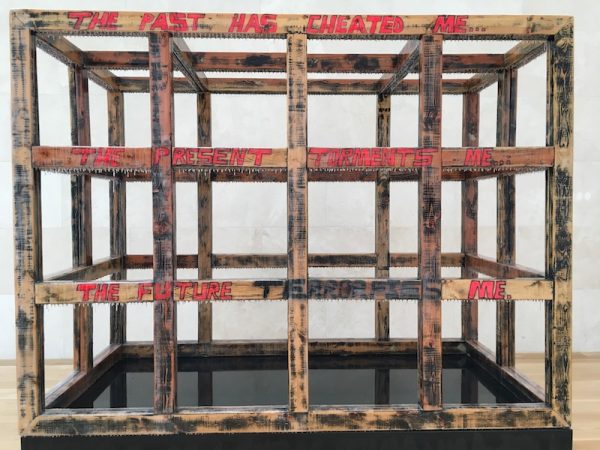 Here’s the thing about the best artists: I do believe them, in that I believe their work communicates even an unconscious consistency about them, body after body of work. Sometimes it’s exorcism, sometimes it’s a reckoning, sometimes it’s a way of ordering the world, or meeting it head-on with a massive, manifest force of ego. But they mean it. We know Mike Kelly was one of Ruby’s mentors. But I believe in Mike Kelly’s bristling and schizo-affected relationship to childhood, suburbia, and fantasy. 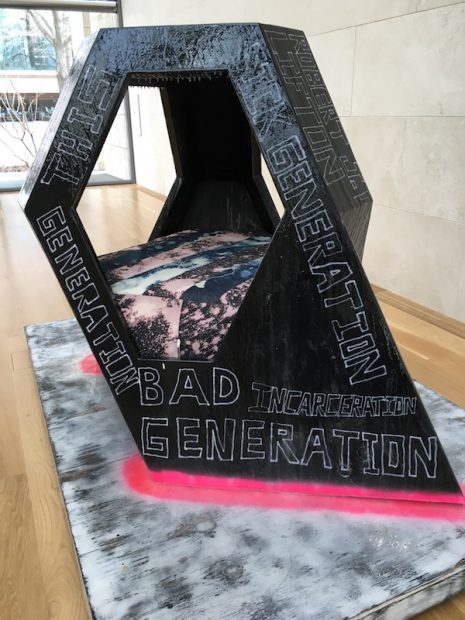 Each successful piece by a believable artist can stand alone in a museum and get a lot across. A whole show of works by a believable artist can be a psychological and emotional event. And it allows you to come to know something crucial about the artist, something that becomes familiar from then on, and tweaks your own view of the world (even if only) by a degree or two, and that’s a kind of baptism. Work doesn’t have to be political or fraught to make an impact. But it seems as though Ruby is trying to be political or fraught, and he can’t sell that shirt off his back, perhaps because that’s not who he really is. 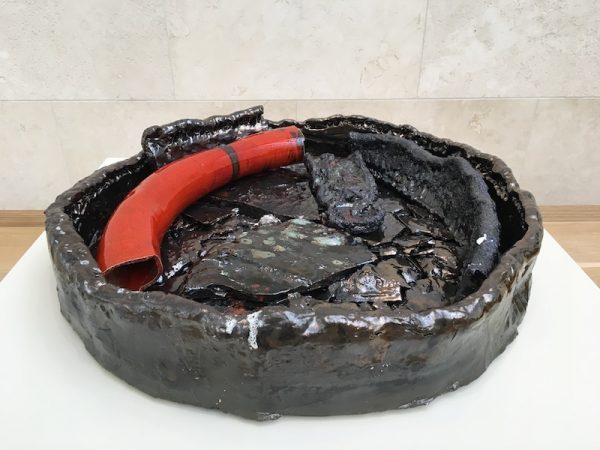 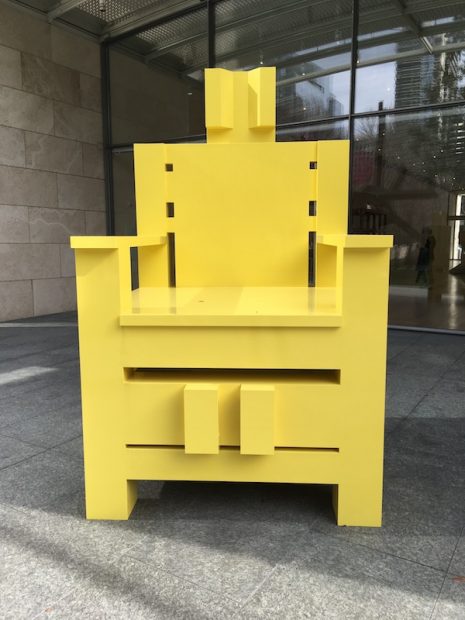 I do like Ruby’s giant ceramic ashtrays — I see something human and circumspect in these heavy, cluttered, hand-worked vessels. They look like they stepped out of a particularly sardonic Guston painting, like animated Godzillas of clay that gleefully crap on your day just to keep you honest. I feel some compulsion and resignation from the artist in them. I also like Big Yellow Mama, a giant powder-coated aluminum chair installed outside that reads like an army of clean-but-monstrous Legos have assembled themselves, with Rietveld in mind, into a cheerfully sinister electric chair. It looks just like the kind of thing that I could have grown up seeing at NorthPark — the Nasher family’s other public gallery — and would have loved, and would probably have put my affection for Sterling Ruby’s name alongside those of Stella and Rosenquist. A single work by an artist can be magical. A lot of works by that same artist can unravel the mystery and undermine the oeuvre.

Perhaps that’s the one thing that will stick with me from this show: the big yellow chair is pretty great.

At the Nasher Sculpture Center, Dallas through April 21, 2019

Christina, I just want to thank you for the Sterling Ruby review. The nail, the head, the hammer, the hit: perfect! You captured the sense of untethered “affect”; the emptiness of an “aesthetic of experience” with . . . not much to experience. You spelled out how experience is an encounter, a psychological event . . . and you didn’t flinch.

I agree with Christina and Michael.

It is so great to see an actual review. Thank you, Christina, for your honest and thoughtful writing.

Having set up his work for years at philips auction
Someone who actually see through “screens”
, often associated with auctions: power, money,
Speaks truth to unmitigated influence and tells
Clearly about lack of thought or true deep of feeling
About why things are made.

Barry, could you expound upon what you saw when setting up the work for auction? Would be fascinating to hear your perspective. For the sake of disclosure I am a HUGE Sterling Ruby fan, but I love most those conversations in which my tastes and beliefs are challenged. Thank you for the insight.

“I struggle with Sterling Ruby’s work, but the struggle seems futile, given there’s so little to sink one’s teeth into.” You must have sculpture — a visual and tactile art — confused with the culinary arts, Christina. The last time I recall cool-looking art taken for brainless art or art lacking unfurled layers of nuance was the old days when art writers were thrown by abstract expressionism. I mean, what can we WRITE about this stuff? Where are the IDEAS? I gave up writing about art when I finally understood the purpose of art was not to give me ideas i could write about, and that the eye really is part of the brain.

Thank you, Bill! It’s interesting that a cultural endeavor unique for its primary focus on aesthetics is being critiqued for a perceived lack of anything but. The ranking of work by conceptual relevance and the critic’s own political metrics is a dangerous, navel-gazing practice that does an irreparable disservice to the art of tomorrow.

Thank Christina for this article, really, the artwork is hard to come up with new ideas but here I have seen the implications that the author has included in these works.

My takeaway from this critique is “Buyer beware: Don’t be seduced by banality.” Applicable on many levels.

Here’s the thing. This review, while refreshing to not just see a puff piece, is toothless. The critique is that Sterling Ruby is a bro. Got it, good job, we already knew that. You need to be talking to the institution. Why did they bring THIS to Dallas? Because this is the sort of big name art star that gets people to come to the museum. It was a lame box office decision. Sterling Ruby is Sterling Ruby, this is what you get. The Nasher can do better.

Jeremy, I’m curious what your actual critique of the work is besides Ruby being a “big name art star” and a “bro?” Is it related to identity, lack of institutional diversity, the work itself? Would be fun to keep this discussion going if you care to. And I completely agree with your assessment of the review. Christina is great!

My critique is that his work is big, “cool”, and empty – his persona of rock star is dated and silly. The text element throughout is just bad. What Christina is saying is correct – I don’t believe him, and what he represents I’m really not interested in. My first response above is a little hot, fueled by coffee on an empty stomach… I have to remember, this of course is just me, more rooted in my own interests and concerns… This is sculpture, not bombs. Why do you like it?

I completely understand the symptoms of coffee on an empty stomach. I am a bit more wired before I have my Zoloft and oatmeal at work.

As far as his work, it’s very diverse and that makes it difficult to write about. But dismissing it all as big, hyper-masculine and empty belies an art-world-weariness that is so often affected and visually limiting. Doing so also misinterprets as serious his use of themes and media I believe is intended to fill the viewer in on the grand irony of which he is fully aware.

For example, most of the newer polyurethane towers include a diminutive 2×4 support. He employs that material as a way of emasculating the work, of making it appear fragile as opposed to virile. It’s a nod of agreement with would-be critics who have these arguably justifiable preconceived notions about a guy like him. The same could be said about the basin theology ceramics, but those go a step further–here he is offering up for critique his very own failures/shortcomings. They’re grotesque and universal at the same time. This isn’t art that takes up space because there is space to take up, it’s not the art equivalent of man-spreading. His work uses the foul and the menacing to expose the contradictions in his personal history as well as that of the collective viewership. And that’s not to mention the soft work, which I think is his greatest, but which Christina completely bypassed 🙁

It’s also for me just really a blast to look at, and that may be where our personal tastes play the biggest role in shaping our perceptions of the work. But I really appreciate your willingness to chat about it and look forward to the continued (or subsequent) discussion.

Thank you all for explicating my inexplicable reaction to Ruby’s works. One piece after another, almost all so different from each other even though there are superficial resemblances (oh, another vampire mouth…). The thought kept running through my head that he is daring, to churn out one slightly different banal item after another, like riffs on a thought. But there’s no there there, no thought/idea. If he is consciously “emasculating” his work, then I wish he would stop. He’s said enough already, I get it and wish I hadn’t.

Excellent review. I had exactly the same reaction to the work in this exhibition.