$2.8 Million Public Artwork by The Art Guys put on Hold 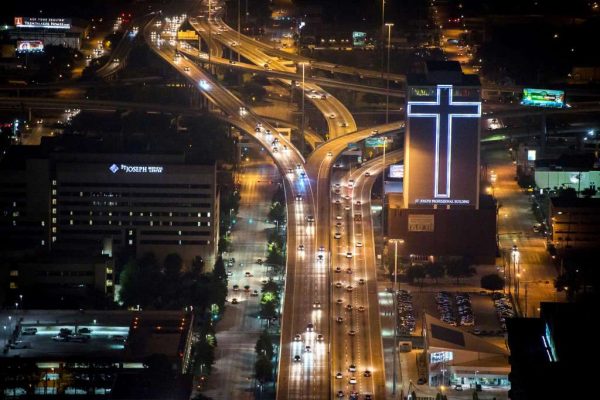 In 2017, the Houston-based company Boxer Property, which manages and rents spaces in more than 120 office buildings across the U.S., bought the iconic St. Joseph Professional Building (2000 Crawford St) in Houston. Known for its location right on I 45’s Pierce Elevated ramp, and for its large illuminated crosses, the building was purchased by the company partially due to its location in a developing area between Midtown and Downtown.

In October of 2017, a Houston Chronicle article noted that Boxer Property CEO Andrew Segal was playing with the idea of removing the building’s crosses and replacing them with an artwork that would be both iconic and social media-friendly. He explained further:

“We have two giant canvases that everybody sees. It’s like a photo bomb in the entire downtown skyline….I want something that’s going to be iconic to Houston. It may be something that changes at night. It could involve a projector.”

In the year since Boxer bought the property, it has removed the crosses (though their shadows remain on the building’s exterior), and has begun remodeling and updating parts of the facility. Although the company had been in talks with artists about the building’s facade, it wasn’t revealed until recently who those artists were or what their visions would be.

Then, this past week, Swamplot, a website covering real estate in Houston, reported that the collaborative duo The Art Guys (Michael Galbreth and Jack Massing) had been working on a project for the building. Unfortunately, however, a few months ago, Boxer had decided to no longer pursue the project. 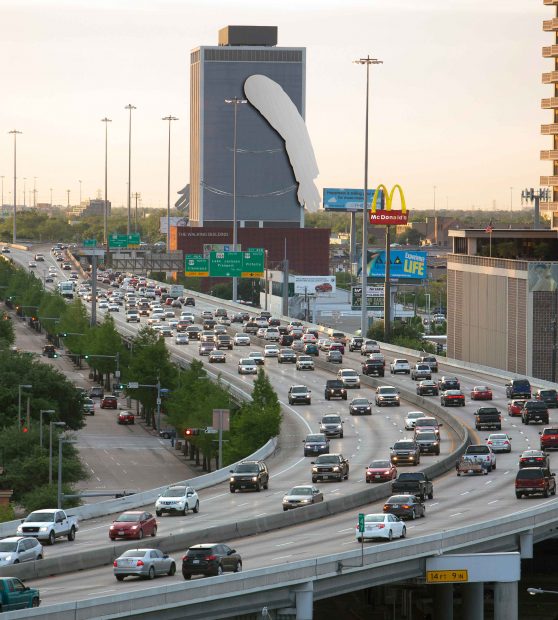 In a phone call, Mr. Galbreth told Glasstire that Boxer had contacted The Art Guys in August of 2017 about the project. The pitch the company gave the duo was the same they would soon tell the Chronicle — they wanted an artwork that would be a gift to the city; an iconic piece that would be uniquely Houston.

After initial meetings about the project, Mr. Galbreth and Mr. Massing did a cost analysis to come up with an estimated budget for an artwork to transform the 18-story building: $2.8 million. They then came up with 101 ideas for the building (an exercise they have done before for other projects), and ultimately settled on the idea of The Walking Building. To realize this piece, The Art Guys would attach “two gigantic human shaped arms” to the building, transforming the entire structure into a sort of large-scale public sculpture found object assemblage. The arms would then slowly swing back and forth, as if the building were walking. 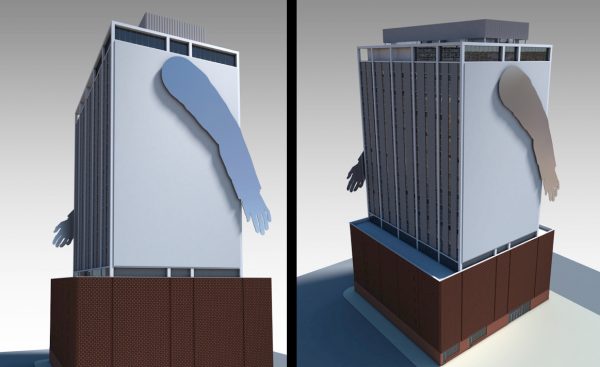 In a brochure for the project, The Art Guys described the universality of their design, saying:

“The Walking Building is conceived and designed to welcome and engage the widest possible audience. The universal, recognizable human form combines the literal with the imaginary. It is meaningful without having a meaning. It is playful and humorous without being childish or threatening. It invites as many interpretations as there are people.”

As they do with many of their artworks, The Art Guys note the historical precedent of gigantic figures as seminal artworks: the Statue of Liberty, various colossi, and David Adicke’s Sam Houston statue all come to mind, as do the duo’s former self portraits on North Shepherd in Houston. 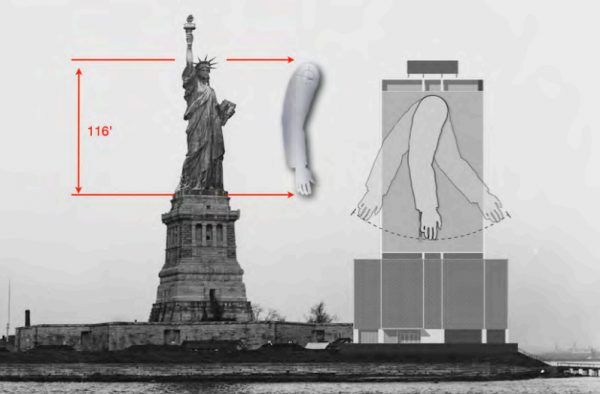 The Art Guys also explained that one reason The Walking Building’s budget is so minimal is because it would be made with existing technologies: the 116-foot-long aluminum arms would be supported by a truss structure and controlled by a motorized system. Already, the duo had been in talks with the Toronto company Media Resources about designing the swinging mechanism for the building, and with Houston’s National Signs about creating the arms. 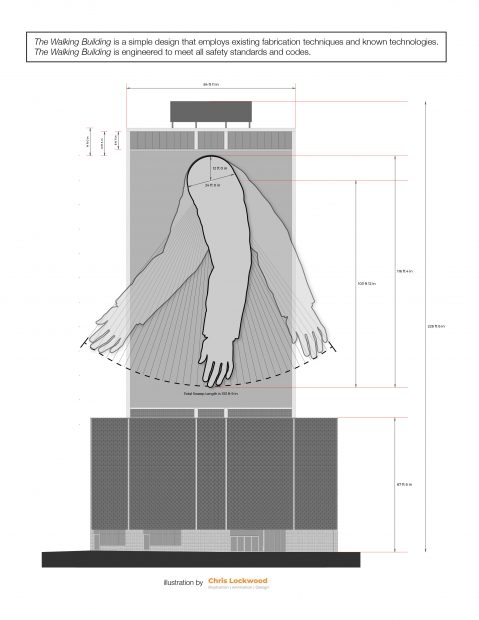 A few months ago, however, Boxer Properties told Mr. Galbreth and Mr. Massing that they no longer wished to pursue the project. In a phone call with Glasstire, Mr. Segal explained that he believes in The Walking Building, but he is “disappointed” that the city of Houston isn’t willing to “get behind” the project. When asked about this, he explained that since the artwork would be adding to the neighborhood and creating an icon for the city (Mr. Segal compared it to the likes of the Hollywood sign), Boxer properties had wanted the city to freeze the tax assessment of the building as a way to share the expense of the project.

When the city denied to do so, however, Mr. Segal said that Boxer couldn’t justify the project on a small office building. And although the company still plans to do something art-related with the building, he noted that “nothing can come close” to what The Art Guys came up with. 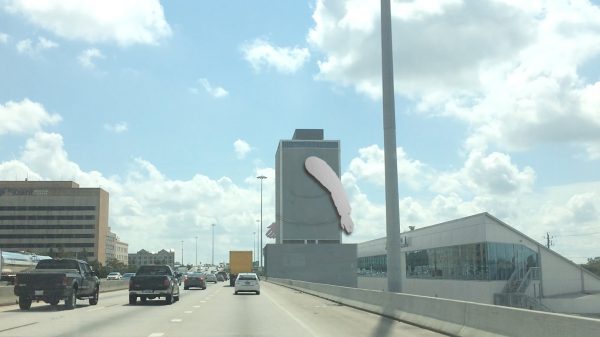 For now, Mr. Galbreth explained that The Art Guys told Swamplot about The Walking Building because they believe in the transformative power of the project and its concept. As for Mr. Segal, he told Glasstire that if the city of Houston were to freeze the tax assessment of the building, then the project would continue as planned.

Disclosures: Justin Segal, Boxer Property’s President, is on Glasstire’s board of directors. Glasstire’s Houston office is located in the 2000 Crawford building. Mr. Galbreth is married to Glasstire’s founder, Rainey Knudson.

Having your cake, wedding, speech, and art, and...

It would be great to consider giving $2.8 million to folks not working from a white, male, heteronormative perspective. Would be interesting to see a work that isn’t simply “It is meaningful without having a meaning” but actually “meaningful with a meaning,” covering building walls in Downtown Houston. Not a critique of the Art Guys, just noting another example of well…what we’re used to seeing out in the world.

I think it would have been beautiful, and it makes me sad it never got made. I believe in the walking building.