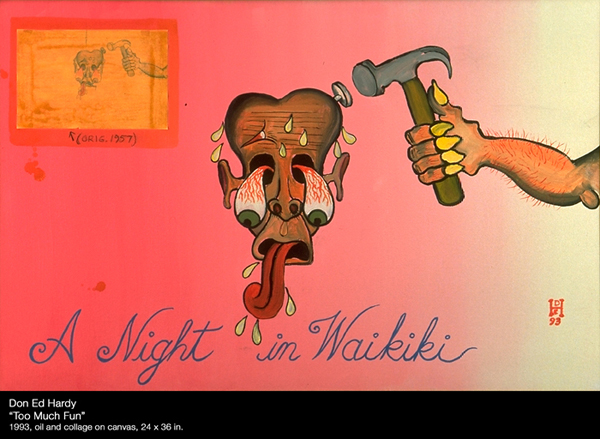 “You talking to who?” They heard me fine, yet each time I told a friend that I was calling Ed Hardy for a quick interview, I got the same incredulous utterance.  It was usually followed by less than kind comments about Hardy and his legacy; the name Thomas Kinkade was mentioned a couple of times. Harsh. Though I knew next to nothing about the man, I was guilty of some of this myself.

There is plenty of info out there on Don Ed Hardy.  There’s the documentary by Emiko Omori, “Ed Hardy: Tattoo The World,” a bit hagiographic but very informative. The man gives plenty of interviews in print and on camera. And there is more to come: Joel Selvin, the west coast music critic, is writing a new biography.  A minimum of research makes clear that the man is not those shirts and shot glasses, any more than Sofia Coppola is a bottle of pink wine.

Hardy earned his BFA from the San Francisco Art Institute, studied with Gordon Cook who warned him that the artworld was a “poisonous environment.” He rejected a Yale fellowship to work in a tattoo shop.  As a kid he had been obsessed with the subculture. The most tender and joyous images from Omori’s film are old pictures of the boys covered in ink, drawing mermaids and serpents on their friends’ chests and arms.  Like any successful businessman, Hardy knows how to stay on message, and during our conversation many of the answers sound very familiar from past interviews, but each time he says, “I was just a kid who wanted to draw for a living,” I buy it completely. There are definite points where spiel meets sincerity.

In the sixties when Hardy started his apprenticeship with Sailor Jerry Collins, tattooing was far from mainstream, it was still illegal in some states and the clientele was straight out of a Sam Fuller movie.  Opening your own shop was an all-in proposition: you had to commit to that world and that craft, no room for dilettantes. Hardy says he was quickly humbled to find out that his printmaking skills did not make him a tattoo prodigy. He came in with the desire to execute more ambitious and subtle designs, but instead had to put in hard years learning and delivering the basics.  And once he built his skills up, he moved to Japan to learn from some of their masters, an apprentice again. 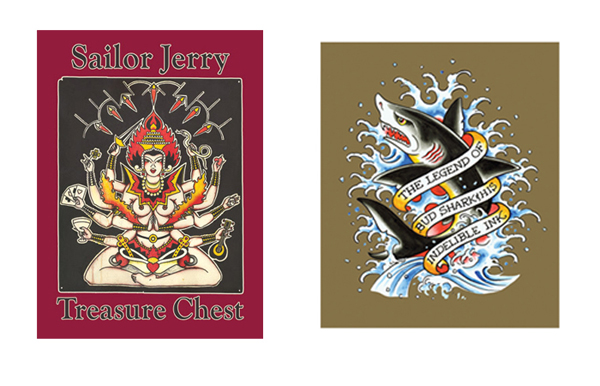 Eventually, Hardy was able to accomplish those wild, intricate designs he had dreamed of. In the field, he is a respected innovator and a mentor to other ambitious tattoo artists.  To the world at large he can be described as sort of evangelist: He still keeps a shop in San Francisco, he keeps the memory of the medium alive by publishing its history, and then there’s the brand.  I am not a fan of the Ku USA produced fashions that bear his drawings, that’s not necessarily a knock on Hardy as he does not design or approve of the final objects, but beyond being a handy-dandy revenue stream, those items are also an opportunity for Hardy to keep the classic American tattoos alive, those images are based on the flash sheets that adorned the walls of the shops he frequented in his youth.  I can respect that strategy.

In the late eighties, Hardy took a break from flesh and came back to canvas and paper.  He’s not ensconced in the artworld, but he’s kept friends there and has made some new ones along the way.  In the nineties he showed at the same San Francisco gallery as the Art Guys, they’ve been buddies since.  The Art Guys have hosted him on their home turf. In Houston, Hardy was particularly excited to be introduced Nancy Kienholz and Walter Hopps. He corresponded with Hopps until his death.

Hardy came to the artworld with no need for it.  Accolades, money, a spot in the books, he had all of that. As David Hickey put it, “he won.”  He has no need to be careful or diplomatic, no one can unmake him at this point. When I called Hardy, I was particularly excited to talk to a man whose career had placed beyond repercussions about just how poisonous our field can be.  He admitted to having witnessed a few “fucked up” practices, but that was the limit of his negativity. He wanted to talk about painting, and the things that excited him, and the things he was proud of. Not having to worry meant not having to harbor any bitterness.  This was a guy who gleefully met his life goals and I wanted to talk about rot. I felt dirty.  Occasionally my skepticism sours into cynicism, I’m thankful to Hardy for the reality check.

Currently, Don Ed Hardy has two shows on Houston walls, DiverseWorks is presenting “2000 Dragons+12” through July 7, 2012 and The Art Guys Museum Of Whatever We Please is showing “Don Ed Hardy: Death or Glory” through July 1, 2012.

I’m absolutely willing to believe Hardy’s a kind man. But I don’t seem to be hearing much talk about the quality of the shows. I haven’t seen the Art Guys Museum one, but I think the DiverseWorks show is massively unremarkable. Like, “Holy shit, why is this here?”

I’m with you Troy. I haven’t seen the one at the Art Guys (I don’t know that the work is esp. different) but the stuff at DiverseWorks looks like some bad undergraduate art project.