Protests at the Whitney Over Connection to Tear Gas 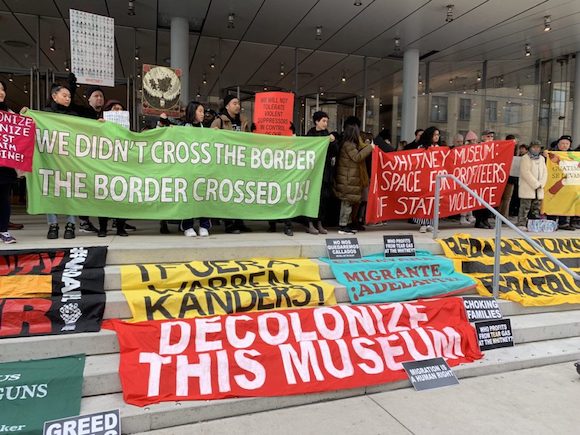 This past season, New York’s Whitney Museum of American Art presented a year-long exhibition that ended in August 2018, An Incomplete History of Protest: Selections from the Whitney’s Collection, 1940–2017. This past weekend, the Whitney got to experience protest first-hand, reports artnet News.

An organization called “Decolonize This Place” and other activist groups brought banners, chants, and sage to the museum. The protest prompted the fire department’s presence because the museum’s lobby was filled with smoke from demonstrators burning sage, a symbolic action meant to mirror the toxic tear gas used on November 25 against asylum seeks attempting to enter the US from Mexico. The protesters stayed and chanted “Fire! Fire! Fire to the colonizers!” but, after a while, they relocated, and the action continued peacefully back outside.

The demonstration is about the presence of Warren B. Kanders, the owner of the company Safariland, on the museum’s board. According to a late November article by Hyperallergic, Safariland  manufactured the tear gas used by United States Customs and Border Protection officers on migrant mothers and children at the San Diego-Tijuana border. Kanders has served as Safariland’s board chairman since 1996 and owner since 2012.

Another Hyperallergic article states that “The protesters noted that they were acting separately, but in solidarity with, the staff of the Whitney Museum. Around a week and a half ago, nearly 100 museum employees wrote a letter calling for Kanders to be removed from the board and for the museum to release a statement acknowledging the issue.” Museum Director Adam Weinberg did indeed respond. He wrote in a statement: “Even as we are idealistic and missionary in our belief in artists — as established by our founder Gertrude Vanderbilt Whitney — the Whitney is first and foremost a museum. It cannot right all the ills of an unjust world, nor is that its role.” Weinberg also called the museum “a safe space for unsafe ideas.” Some protesters found the statement, “a slap on the face of their workers and the public at large.”

Keep a look for further activity at the Whitney. “We do not do one-offs,” Decolonize This Place told artnet News in a Facebook message. “But we are also waiting to hear how the Whitney will respond after our action, and whether they will remove Warren B. Kanders.”

I completely support this direct action by artists. Who else is going to question the board make-up? And, yes, it matters who sits on boards. Having just experienced being tear-gassed by militarized French police as a tourist observing the current street protests in Paris, it felt like nothing less than state violence used to control dissent. Tear gas is outlawed in theaters of war as a chemical weapon, but it’s being used here in the U.S. by militarized police forces in Ferguson, the border, and elsewhere. Chemical weapons manufacturer Warren Kanders sitting on the board of the Whitney isn’t right. How about more representative seats for artists who aren’t afraid of questioning their public institutions board make-up of elites with questionable wealth accumulation?

This post was an opportunity to reflect on the boards of Texas arts nonprofits. Weapons, oil, resource grabs on foreign and indigenous land, guns/NRA, border militarization, industrial polluters. Question to all directors: who is funding your progressive, inclusive, and radical programming — what are you prepared to defend in front of audiences, donors, and communities when you’re eventually asked about it? What else are they funding ( — who is the company you really keep)?

Protests in other states are always such a hot topic. There was a protest of the 30ft KKK mural at the Blanton Museum of Art and this publication would not acknowledge it at all.