This is the third post in a series of zine roundups where I pull some zines from my library — some old, some new, some from Texas and some from abroad — and give you the lowdown on who created them and what they’re about. Read the first post here, and the second post here. 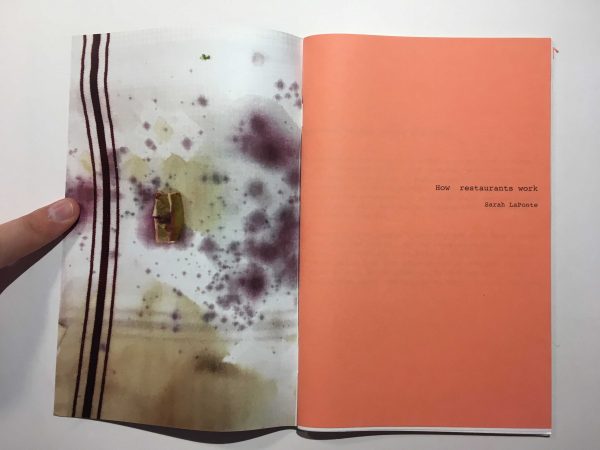 If you’ve ever worked or have been close to someone who worked in the service industry, you know how an irregularly scheduled, high-stress job can complicate your life. But, if you’re the type of person who can roll with the punches, then to you the restaurant industry might be a haven of like-minded individuals. 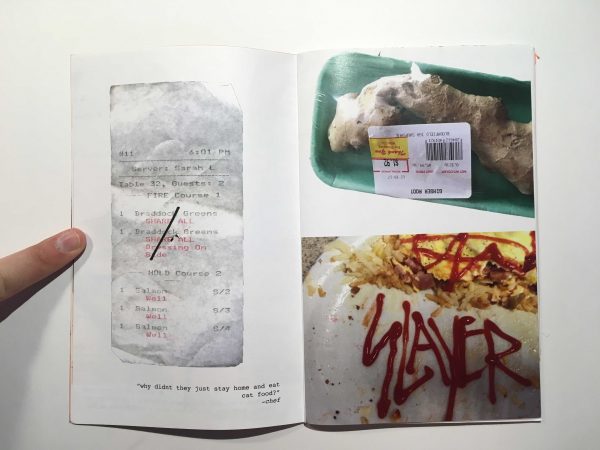 Braddock, Pennsylvania-based artist Sarah LaPonte’s zine How restaurants work explores this love-hate duality by documenting her and her co-workers’ experiences dealing with unruly guests, each other, and the general day-to-day of life in the industry. Part photobook, part personal narrative, and part industry exposé, LaPonte’s publication balances text written by her and others with full-page images of back-of-house scenes, underwhelming and laughable plates of food, and scans of server tickets that are riddled with inside jokes poking fun at customers’ peculiarities. 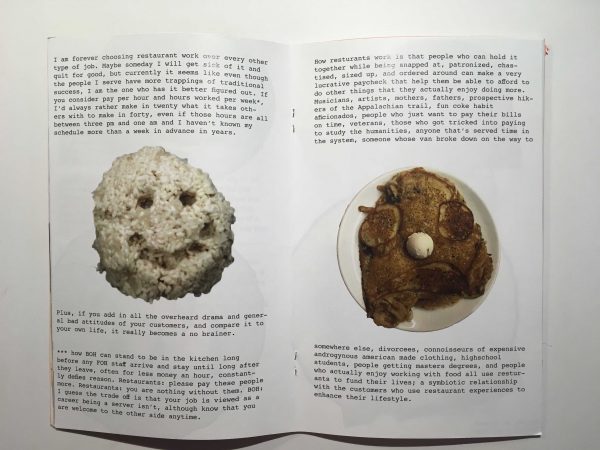 The main point of How restaurants work is to expose the absurdity of the service industry: almost no one truly wants to be there. As LaPonte’s aptly explains in the publication’s centerfold: “How restaurants work is that people who can hold it together while being snapped at, patronized, chastised, sized up, and ordered around can make a very lucrative paycheck that helps them be able to afford to do other things that they actually enjoy doing more.” Adding to this idea is LaPonte’s acknowledgement of how she, as a white woman, ends up with front-of-the-house jobs, making a share of money off tips, while people of color are generally selected for kitchen and other behind-the-scenes jobs that pay less. 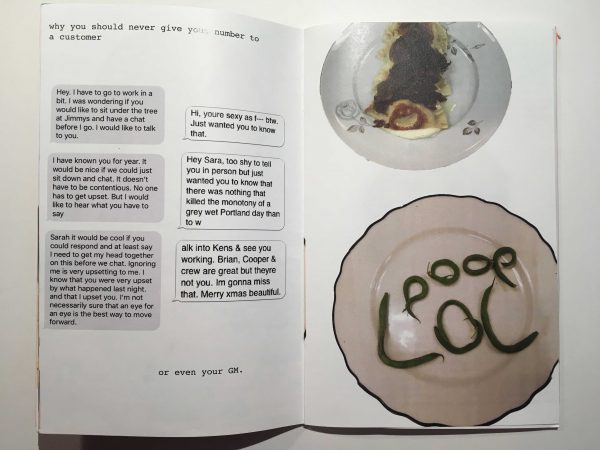 I realize I called this zine an exposé — and the thing is, though antithetical, it’s an exposé with love added. Through the publication, you can tell that LaPonte truly appreciates what the service industry has given her, in flexibility, payment, and more importantly, friendship. And rather than shying away from its problems, she acknowledges and documents them in hope that the restaurant industry will improve for those working within it. 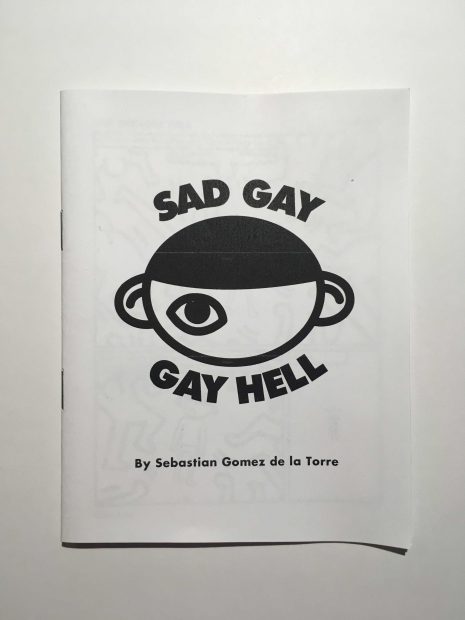 Published in conjunction with his exhibition of the same name at Wedge Space, Houston Community College Southeast’s art gallery, Sebastian Gomez de la Torre’s zine Sad Gay // Gay Hell looks at the loneliness, isolation, and complications of dating as a gay man today. The main character, Sad Gay, is purposely nondescript so he can stand in for any viewer; in an artist talk, Gomez said that the character is supposed to be relatable, more or less a blank canvas onto which multiple experiences can be projected. Gomez manages to animate Sad Gay into an emotive character through expressive eye and whole-body reactions to (mostly disappointing) situations. 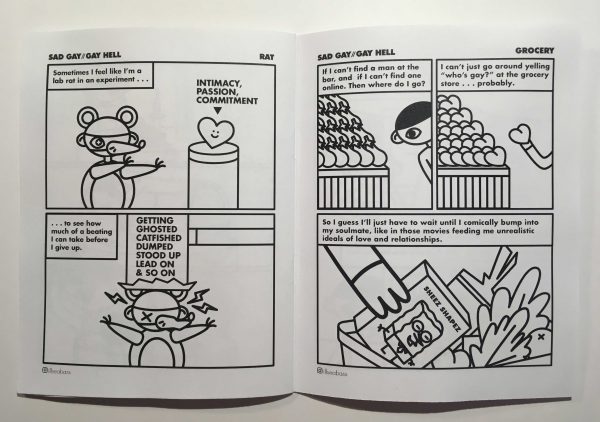 The one-to-four panel comics, almost all of which are only one page long, spell out situations that seem familiar and even all-to-real to be contrived. From wading through the waters of pre-date self-doubt to the gut punch of being stood up for dinner to fantasizing about finding rom-com-like love in a supermarket, Gomez’s zine presents universally empathetic looking-for-love situations, no matter how the reader identifies. 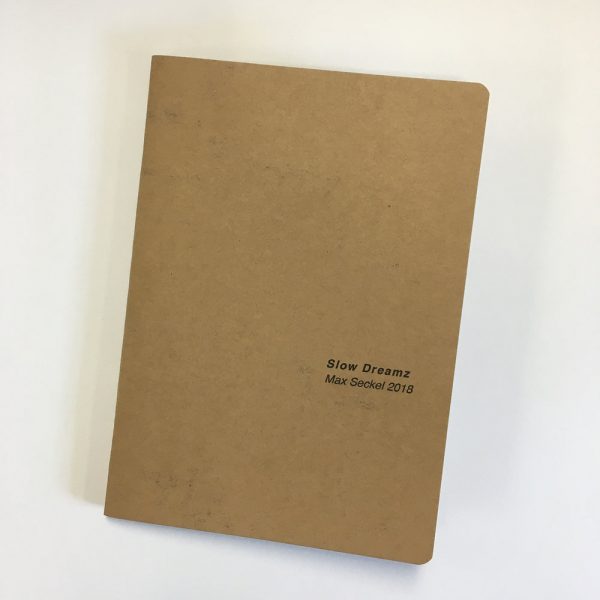 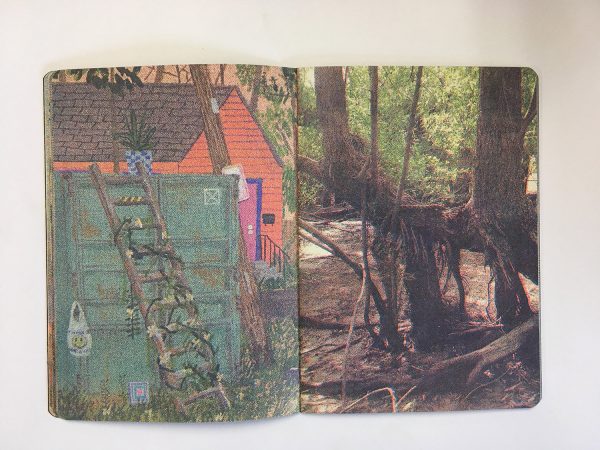 Spread throughout the book’s 40 pages, interspersed between images of swampy trees, pastoral sunsets, and perplexing interiors, are images of Seckel’s paintings from an exhibition also titled Slow Dreamz that was on view at Antieau Gallery in New Orleans. In a way this book, much like Gomez’s zine Sad Gay // Gay Hell mentioned above, stands in as an exhibition catalog documenting the artist’s work. Seckel takes this idea a step further by reproducing his paintings in a way that renders them beautiful on a printed page while also playing down their true form and color. 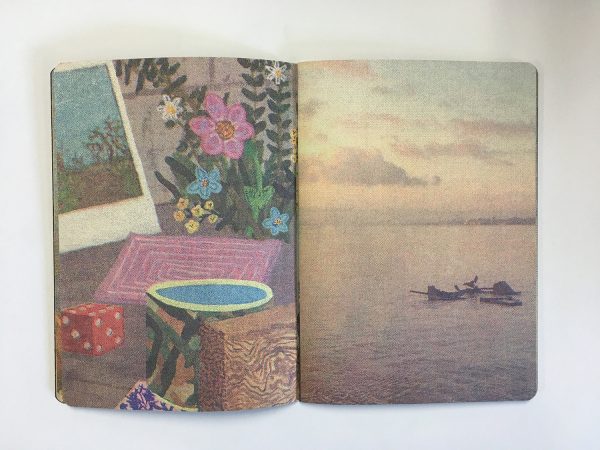 The images are tightly cropped, and on a first flip through of the book, you may miss that some of the full-page prints are images of Seckel’s large-scale paintings. Due to Seckel’s expertise in layering colors using the risograph process, all of the images in the zine share equal footing among the real-not-real cartoonish world that spring from the artist’s candied, pastel colors. 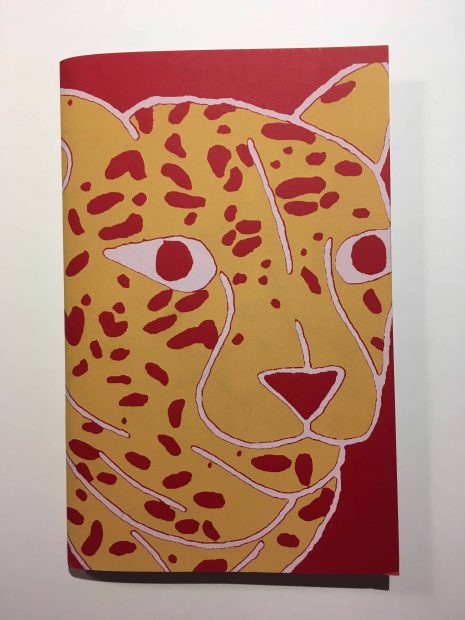 Based in Austin, Texas, artist Manik Raj Nakra makes evident the violence in the natural world when it’s blighted by humanity. His works in various recent shows across Texas have documented real and imagined tiger attacks, beheadings, and snake charmings, using reclaimed ancient imagery that stares down British imperialism. 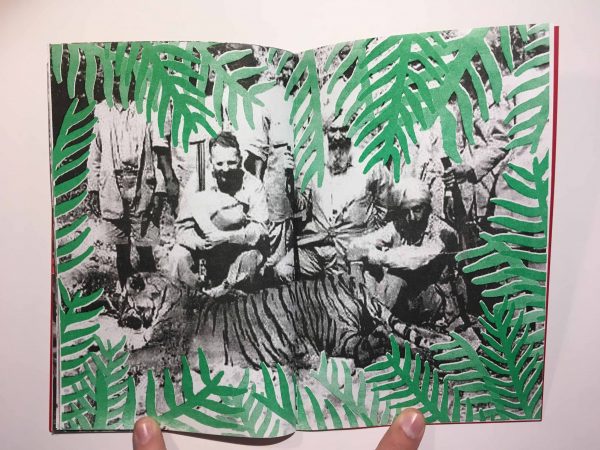 In Nakra’s zine Meat For Wild Men, which was published by Austin’s Raw Paw Press on occasion of his 2015 solo exhibition at Austin’s Not Gallery, the artist overlays his own images atop black-and-white photographs of British colonial hunting parties. Documenting the white settlers’ mission to kill big cats of prey, the publication positions readers as spectators in forest brush at the foot of gun-holding mustachioed men in safari hats. Some images have a implicit brutality to them, like those invaded by bright red arrows, and others are more hermetic, like a picture in which a hunter wears the cartoon head of of a feline he killed. 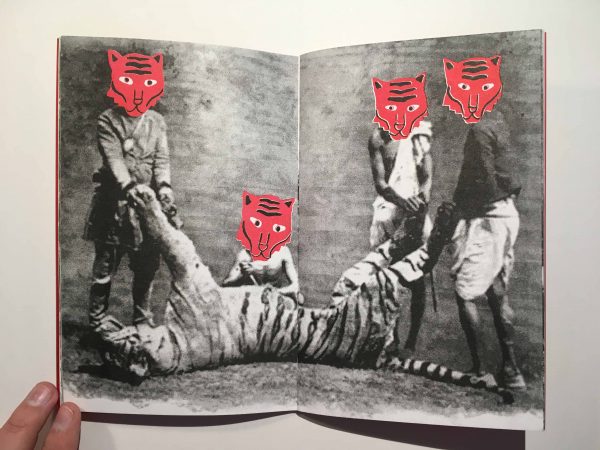 Nakra’s semi-repatriation of such imagery feels light and airy, despite the dark subject matter. Part of this is in his book’s coloring — the stark red, black, and green inks contrast with one another in a way that feels purposefully design-y, in a sense that they abstract and obscure some of the more gruesome aspects of the hunts Nakra depicts. This too reflects in Nakra’s other artwork: Through manufactured colors and a flat, pop sensibility, he shows us a world of his own making. 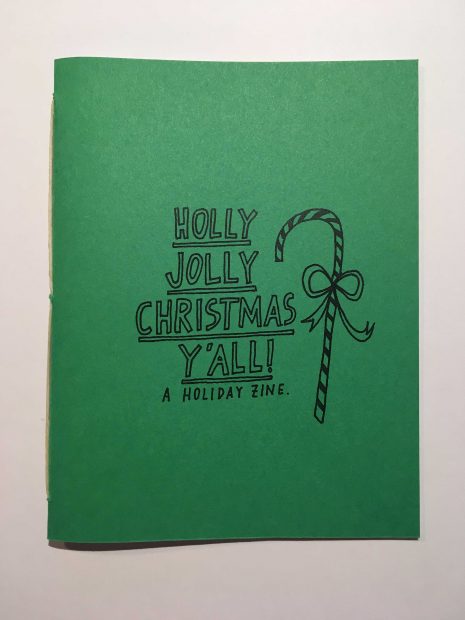 When she’s not working as the Contemporary Art Museum Houston’s Director of Education and Public Programs, Felice Cleveland is moonlighting as a zinester. December is in full swing, so I couldn’t not include her Holly Jolly Christmas Y’all holiday zine in this roundup. Designed to be gifted, Cleveland’s publication is a step-by-step breakdown of how to celebrate Christmas. 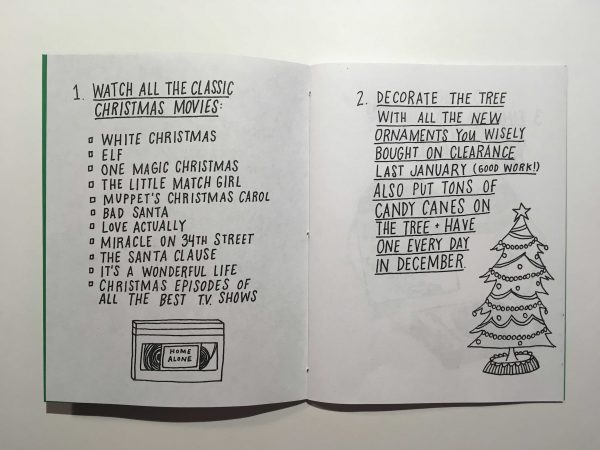 From a checklist of essential holiday movies to a recipe for rosemary shortbread cookies, the small booklet is a delightful reference guide that walks you through ten simple steps you can take to make Christmas (in Texas) a success.

Every zine referenced in this article, with the exception of Manik Raj Nakra’s ‘Meat For Wild Men,’ was found by the author at Zine Fest Houston 2018.