Austin: Get Some Zines this Weekend 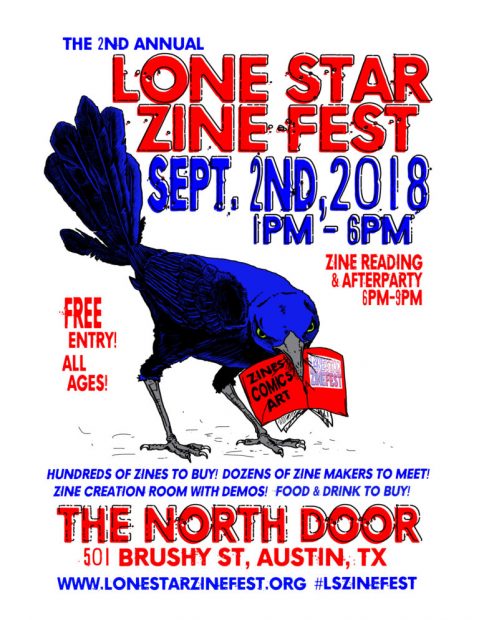 On Sunday, September 2nd, 2018, the second annual Lone Star Zine Fest is scheduled to run from 1-6PM at The North Door in Austin, Texas. Featuring more than 36 artists, collectives, and zinesters from across the state, the event is locally run and is sponsored by the University of Texas Libraries and Town Talk Library (an independent library and archive out of Austin), among others.

The Lone Star Zine Fest popped up to fill the city’s self-publishing void after the 2015 Austin Zine Fest was postponed and ultimately cancelled due to community conflict. At the time, members of the zine community questioned the inclusivity of the event, which was to be held at the George Washington Carver Museum and Cultural Center in East Austin.

The festival is also somewhat of a substitute for Farewell Books, an independent Austin book store that sold zines and other self-published ephemera, that closed in early 2017.

The event doesn’t only include vendors selling their wares; there are also zine making areas, binding demonstrations on the hour, and mingling with other art lovers. After the official festival is over, there will be an afterparty and zine reading at the venue from 6:30-8:30PM. 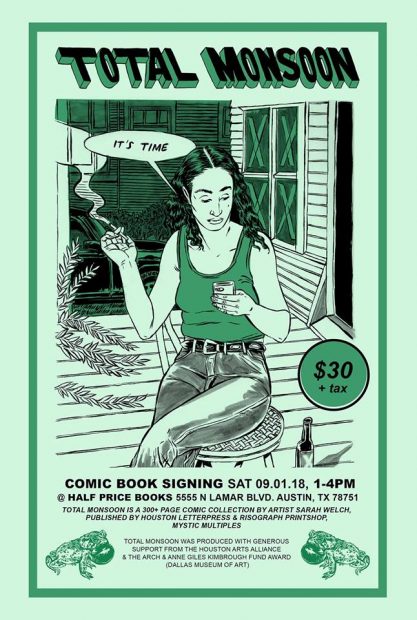 See a full list of Lone Star Zine Fest exhibitors below. If you’re in Austin and have a hankering for zines today, September 1st, you can visit Mystic Multiples from 1-4PM at Half Price Books on North Lamar (5555 N Lamar Blvd) to pick up their latest release: a compilation of Sarah Welch’s Total Monsoon series.

Get Prints, Zines, and Comics in Austin at...

This is going to be a cool event, but i dispute that there is a self-publishing void. Are you unaware of STAPLE!?