Making Africa: A Continent of Contemporary Design at the Blanton 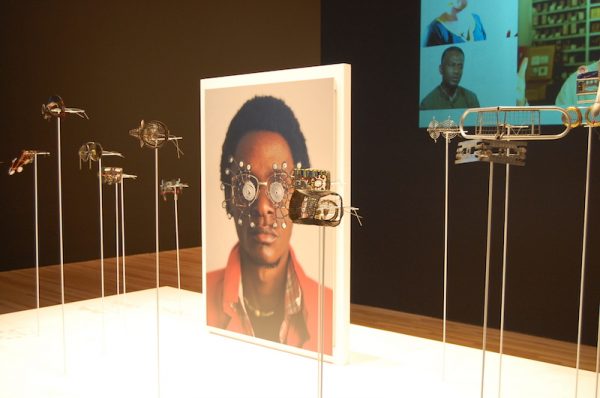 Glasses by Cyrus Kabiru, from the series C-Stunners.

Before you even scratch the surface of the massive show Making Africa: A Continent of Contemporary Design at the Blanton in Austin, you’re reminded that Africa is much larger and much more diverse than the single name of a continent implies. It’s a valuable lesson — one that implores the viewer to exercise a certain open-mindedness and curiosity.

In the exhibition’s first gallery, interviews loop on three screens that circle a large array of improbable glasses by Cyrus Kabiru [pictured at top].

“An African is an African at a very last instance,” Koyo Kouoh, a curator based in Dakar, says on one of the three screens. “He is first and foremost a Wolof or a Doula or an Igbo, and then after that he becomes maybe Nigerian, Cameroonian or Senegalese, and then maybe he becomes African.” There are 54 countries in Africa. To conflate them is akin to confusing the art of Mexico and Canada because they happen to share a continent.

The show kicks off with a small field of Kabiru’s C-Stunners, which feels like an arrow to the blind spot of some presumed ur-viewer. These pieces employ discarded materials to create fantastic, if unusable, eye glasses. They’re beautiful to behold, and yet you can instantly recognize how difficult it would be to see if you wore them. It’s a sort of warning, or guide, or omen about what is to follow. Kabiru’s use of recycled materials as a lens through which to view —or not view — one’s surroundings is not just resourceful, but insightful. 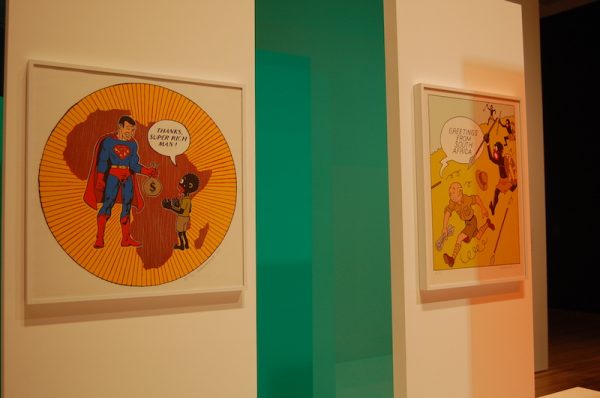 From here, the show explodes into room upon room of textiles, portraits, graphic design, and sculptural work. One thing that immediately stands out is the absence of traditional African art — the sort of artifacts one usually finds in an encyclopedic art museum’s permanent collection, implying that art hasn’t been made in Africa since early civilization. In Making Africa the works are contemporary, and they acknowledge that 40% of Africa’s population lives in urban environments. In fact, the only work that reminds the viewer of Western tropes about safaris and natives is the rich comic works of Anton Kannemeyer. In one image, a balding white man runs from a tribe of natives wielding spears. The man’s speech bubble says simply, “GREETINGS FROM SOUTH AFRICA.” Kannemeyer’s use of vintage superhero comic aesthetics, and caricatures with flat black skin and large red lips, makes the absurdity of the stereotype doubly uncomfortable. The commentary folds in on itself like mental origami. 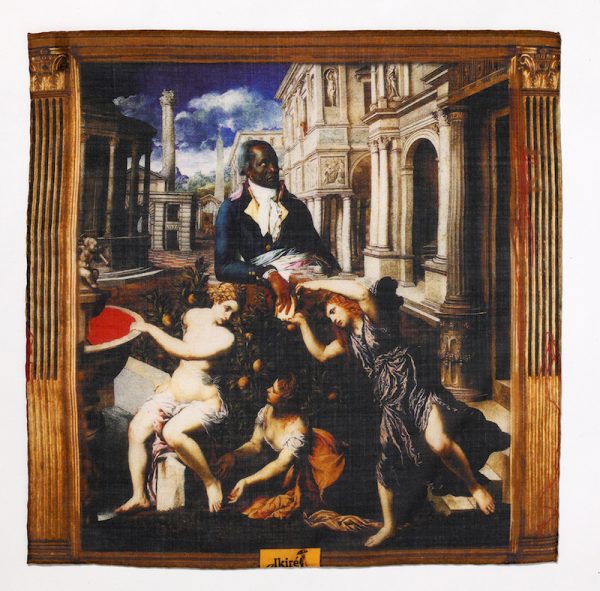 A comical curatorial pairing places Kannemeyer’s work above a magazine open to a diesel ad with a satirical news article about Africa sending aid money to America’s New England schools because, it had been found, the children couldn’t read more than three words in a row. Nearby, a series of pocket squares from Ikiré Jones’s collection, The Untold Renaissance, depict Africans in prominent positions in works of classical western art. And here, the inserted figures don’t seem out of place. The impression is that they belong, and it seems odd that they weren’t there before.

References like these — to race, economy, and colonialism — abound throughout the show. There is something reassuring about this, though it’s hard to say why. Is it simply that the narrative of colonialism is a familiar one, and it gives a white viewer such as myself some renewed trust in their knowledge? Or is it something a step beyond — perhaps that the story is tired as told through history books by colonists, but the same story told through art from the perspective of the colonized transcends. It’s an odd thing to find so much pleasure in something that directly critiques ones’ own self. 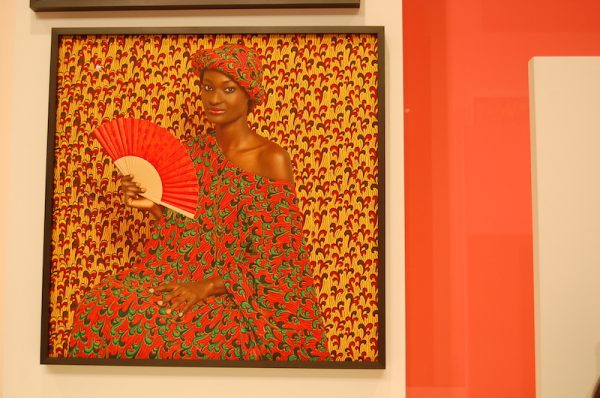 Of course, the seductive palette of the exhibition make this more palatable. This show is, after all, about design. Nowhere is this clearer than in Omar Victor Diop’s photography. His portrait of model Aminata Faye, Aminata, is a simple enough composition — a seated woman holding a fan. But there is such strong opposition between design elements in her costume and the background that it begins to feel like a collage. Her hand floats, disembodied, on her lap. The colors are saturated and consuming. You’re not sure where to rest your eye: her face, her hand, the fan?

Diop’s photos are not simply beautiful, however. Something in them presses beyond the vibrant colors and touches on something like a secret life. The characters portrayed are mysterious and nuanced; they’re far from the caricatures in Kannemeyer’s prints. And this contrast — between the artist commenting on how they are seen versus how the artist sees themself — is felt deeply throughout the show. The work swings like a pendulum between internal perceptions and the acknowledgment of external ones.

As you move from that first brightly lit room, full of rich color and vibrant prints, and into the next, there’s a palpable transition in mood and medium: You’re met by furniture, and a giant set of cogs set against black walls. It’s almost like entering another show altogether. 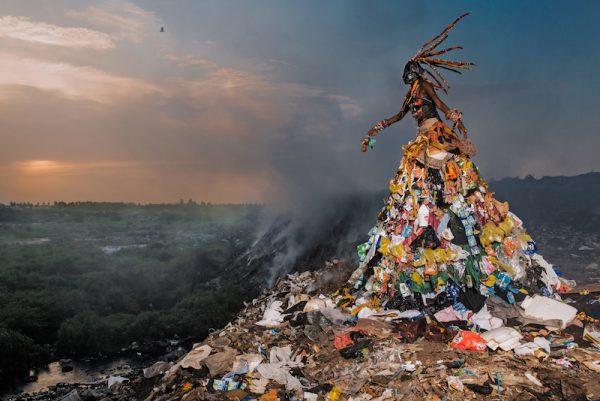 In a series of photos titled The Prophecy, numbered 1, 2, and 6, photographer Fabrice Monteiro depicts women outfitted in garbage against Senegalese landscapes representative of the country’s pollution problems. The women are both part of the land and an interruption of its surface. Though the women appear to be goddesses of a sort — giants in elaborate gowns — they each wear a black plastic mask bound tightly to their face, as if suffocating. The title suggests that suffocating in a sea of plastic is one possible future you don’t need to be a mystic to prophecy, as evidenced by the proliferation of recycled materials used throughout the entire show. The repeated use of refuse as a material is an acknowledgement of its pervasiveness. Nearby a set of chairs and a table made of recycled plastics by Bibi Seck, called Taboo, are yet another example that the movement toward making is a commentary on resourcefulness, and a movement against blind corporate manufacturing. These works evidence a clear link between inventiveness and necessity, as the old saying suggests.

One piece that offers an optimistic respite from the bleak premonition of the end of the natural world is Porky Hefer’s Humanest, a nest large enough for two grown adults to curl up together. It’s the quintessential opposite of a work in the final room of the show, Gonçalo Mabunda’s Harmony Chair.

In that space, though the walls have returned to white and you’re again faced with bright textiles and inventive furniture, there is something subdued about the room, and it could be in part due to the looming presence of Mabunda’s Harmony Chair, which is a throne composed of weapons that have been welded together. Under the gaze of this violent object, along with the cacophonous rumble from Robin Rhode’s short animation, Piano Chair, in which a piano is brutalized by a man in formal tails, even the more playful pieces in this room come off as ominous. The muscled men in Leonce Raphael Agbodjelou’s untitled photograph feel a bit more aggressive than they may have nearer the photos of imaginative fashion in the earlier rooms. 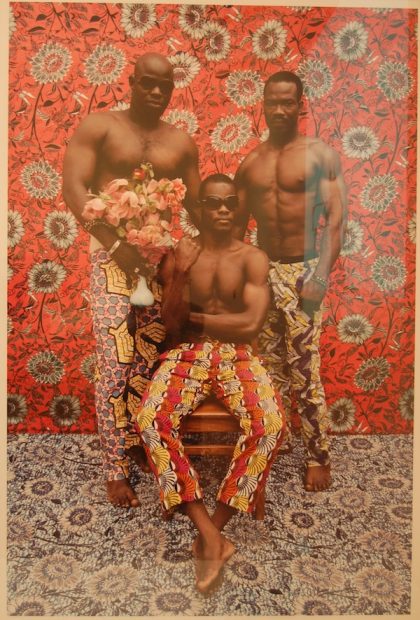 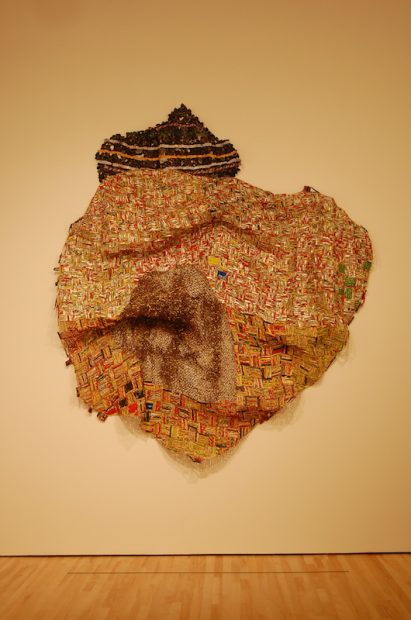 The show ends, unsurprisingly and fittingly, on a piece by El Anatsui from 2006. Nane is, perhaps, the exception to the expectation that African art exists in the past. His work has been a feature at the Blanton for years, and his elaborate sculptures, which are pieced together like a quilt from the aluminum tops of bottles, fluently navigate the most prominent elements of this show — the act of creation as a social statement, and expanding what the world sees as “African Art.”

Through January 6, 2018 at the Blanton Museum of Art, Austin.

A really sensual and inviting review. Now I must see the show.