From the Page to the Street: Latin American Conceptual Art at the Blanton 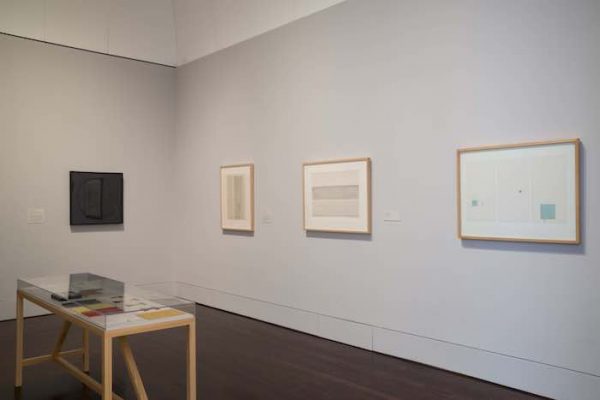 “The artist will not teach us to see with his picture but with his finger,” wrote Argentine artist Alberto Greco in 1962. “He will teach us to see again what is happening in the streets.” Three years later, in Barcelona, Spain, Greco chose to perform a final gesture, writing “This is my best work,” on a wall as he floated into the mystery, his life intentionally ended by barbituates at age 34.

Greco’s last piece of art was clearly the most radical statement one could make in response to political, social, and cultural repression, but artists throughout Latin America engaged in revolutionary DIY art as their own particular expressions of the conceptual art-think zooming around the continents in the kaleido-cray-scape of the 1960s. From the Page to the Street: Latin American Conceptualism, at UT Austin’s Blanton Museum of Art, presents a survey of mail art, photography, video, artists’ books and periodicals, concrete poetics, and ideas for art actions, created from the early ‘60s to the 1980s. While the work is more politically overt than the more “formal innovation” of conceptualists elsewhere, Blanton curator Julia Detchon notes that the Blanton show aims “to track a history of radical experimentation happening at the object level. The art is conceptual insofar as it redefines the relationship between artist and viewer from a didactic one to a collaborative one.” And Latin American artists, so many of whom were responding to the dire circumstances of living under dictatorial regimes, nonetheless shared those characteristics with their North American and European peers. 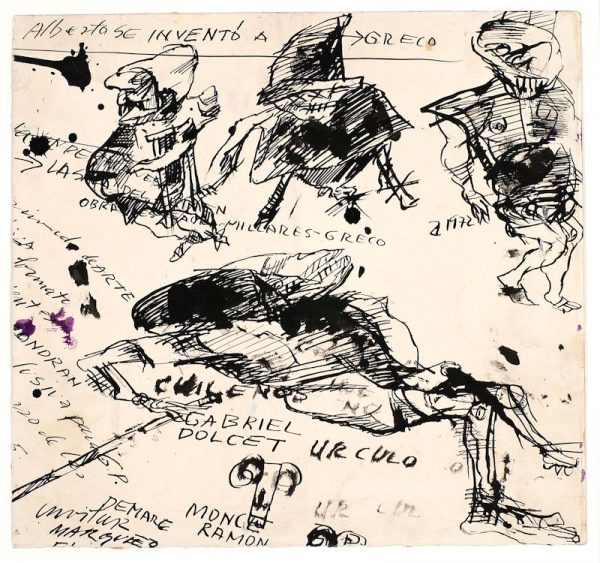 “Greco is a work by Greco,” was another of Alberto Greco’s my-life-is-art proclamations, exemplified at the Blanton with a drawing, Alberto se inventó a Greco [Alberto Invented Greco]. Writing the title at the top of the page, he recounted his daily experiences in Europe with dashed inky portraits (is that Napoleon?) and automatic writing. One March day in 1962, writes Detchon, the artist “set out on the streets of Paris with a piece of chalk, signing his name on people, objects, animals, and situations in what he titled the Primera Exposición de Arte Vivo [First Exhibition of Live Art]. Greco’s action radically questioned the idea that lines on a page form the basis of all representation.” 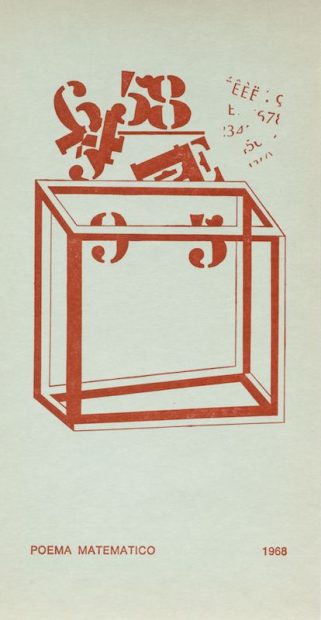 Edgardo Antonio Vigo, Poema matemático [Mathematical Poem], 1968. Rubber stamp with letterpress on green cardstock, 9 5/16 in x 4 13/16 in. Blanton Museum of Art, The University of Texas at Austin, Gift of the artist, 1995

Edgardo Antonio Vigo (1928-1997) made his hometown of La Plata, Argentina an international hub of the mail art scene. Self-described as an “unmaker of objects,” Vigo’s work instead included cosas [things], prescriptions or instructions for actions or perceptual adventures. Like many Latin American artists living under a dictatorship or a military junta, Vigo fought government censorship and oppression, most vigorously to find and free his son Palermo, who was “disappeared” by the government in 1976. The Blanton assemblage includes his visual verse of rubber stamp and letterpress, Poema matemático [Mathematical Poem]. Another work on view, the 1970 lithograph and letterpress on wove paper, Obras (in)completas [(In)complete Works], exemplifies the personal, hands-on aspects of mail art. Vigo printed a set of four labels and mailed them, inviting recipients to affix them to items that could be then transformed to art objects. As depicted in an exhibition photograph, the sender-artist placed his labels on bottles of Bols gin, “the traditional drink of Argentine gauchos.” 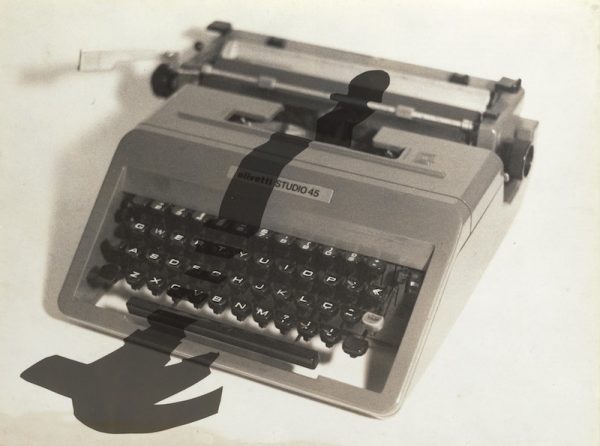 Brazilian conceptualist Regina Silveira (b. 1939) is represented by four postcard photomontages, Enigma 1 through Enigma 4, depicting shadows laid across items: a saw shadow over luggage, hammer over typewriter, comb over a cooking pot, and a fork shadow over a dial phone. “I have always been interested in the mental and temporal relationship that shadows stain with their present or absent references,” the artist explains. “In short, this is a vast field for poetic operations… .” As Detchon notes, the “incongruous pairings are alternately menacing and harmless.” 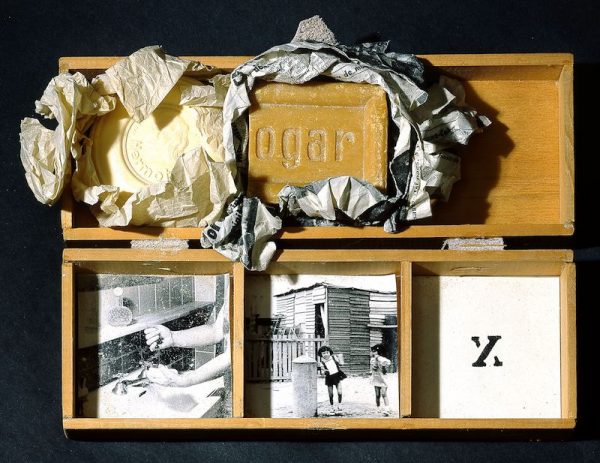 The soaps and images in Caja con jabones para distintas clases sociales [Box with Bars of Soap for Different Social Classes] by Alfredo Portillos (1928-2017) of Buenos Aires illustrate the divisive effect of socio-economic differences played out in mundane details of daily life. “Art,” Portillos proclaimed in 2010, “is an initiatory fact… [and] we must have a dialogue with the superior energy that is art. Art is something that is not seen but is, as it is with religion.” 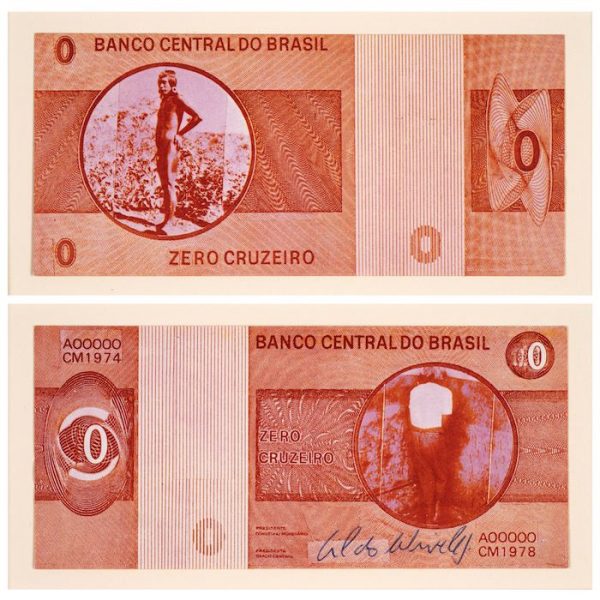 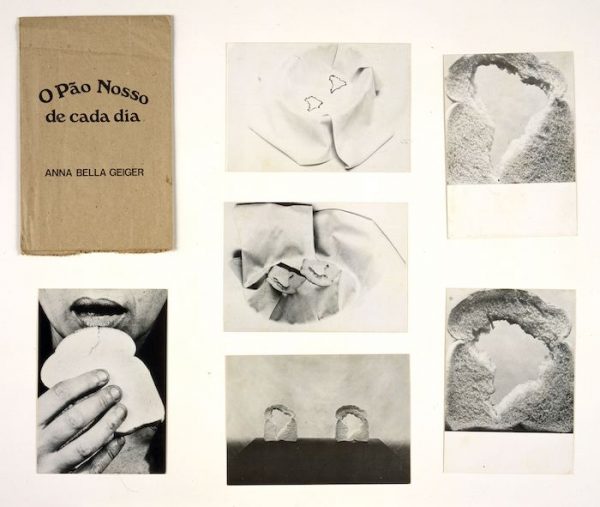 Brazilian artist Cildo Meireles (b. 1948) also responded to military dictatorship with conceptual subversion, represented here with two lithographs that critique the imaginary yet very real power of national currency. For Zero cruzeiro he replaced Brazil’s national heroes on its paper dinero with images of an indigenous tribesman and a mental patient. Another Brazilian artist represented here, Anna Bella Geiger (b. 1933), is of Jewish-Polish descent and had her first exhibition in Poland just last year. Her work of six postcards and a brown paper bag, O pão nosso de cada dia [Our Daily Bread], also references Brazil’s indigenous peoples as a gesture of cultural resistance. The piece documents a performance in which Geiger created outlines of Brazil and South America by eating portions of slices of bread. The artist’s 1976 video work in the exhibition, Mapas elementares no. 1 [Elementary Maps No. 1], in which she draws the outline of a world map and then blackens the shape of Brazil, includes the deceptively cheerful Chico Buarque song, Meu caro amigo. “What I really want to tell you is that things here are black,” the song’s narrator confides about the nation’s political situation.

Persuaded by his artist father not to follow such an uncertain career path, Buenos Aires native León Ferrari (1920-2013) trained as an engineer. Life under a junta, however, radicalized Ferrari and inspired him to resort to making art. With fellow Argentine Vigo he shared a sad kinship; after Ferrari was exiled to Brazil, his dissident son Ariel “disappeared.” In 2004, the artist famously pissed off the Archbishop of Buenos Aires, who later became the current Pope. His piece at the Blanton, Bairro [Neighborhood], is a large heliograph that deploys Letraset icons with rubber stamps and drawn material. For one of Ferrari’s “editions of infinity” that he mailed to friends, the depicted ‘hood is one of topsy-turvy, chaotic order and contradictions befitting the modern scene. 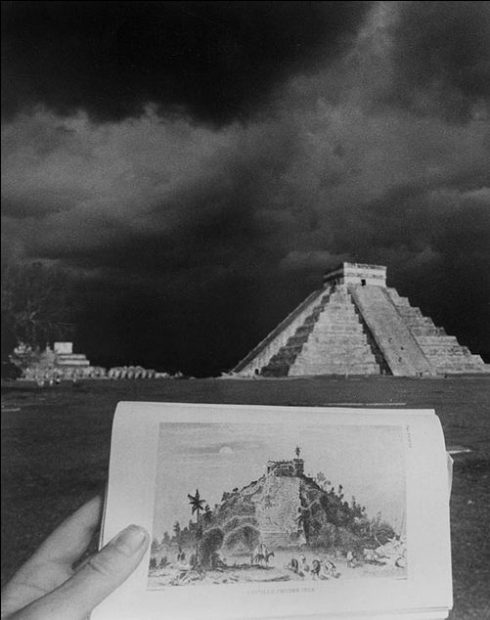 Leandro Katz, El Castillo (Chichén Itzá), 1985. Gelatin silver print. 20 x 16 in. Blanton Museum of Art, The University of Texas at Austin, Purchase through the generosity of the Charina Endowment Fund, 2017

Three gelatin silver photographic prints from The Catherwood Series by Argentine Leandro Katz (b. 1938) offer a wry commentary on the colonial consumption of Mexican antiquity by the famous “American Traveler” John L. Stephens and an English artist-architect-explorer named Frederick Catherwood. The pair “discovered” the ruins of “lost” Mayan cities in the 19th century, and their 1841 book, Incidents of Travel in Central America, Chiapas, and Yucatan, is often regarded as a “watershed” achievement in Maya studies. For his 1980s-90s in-their-footsteps performance, Katz visited sites that Catherwood documented by drawing with the aid of a camera lucida. Holding a copy of Incidents out before him, open to the specific page with Catherwood’s drawing of the archeological site being visited, Katz “rediscovered” the preserved ruins. Shown here, The Castle, Chichén Itzá [El Castillo, Chichén Itzá] contrasts the site in its unexcavated state with its more recent trekker-ready dynamism. Adding a touch of levity, Katz’ camera also captures his thumb and finger holding the open Incidents.

Sent to the United States by her parents after the Cuban Revolution, the work of Ana Mendieta (1948-1985) has often been overshadowed by the terribly sad and tragic story of her death. For the past decade or so, however, more attention has been paid to her powerful, elemental — and often lyrical — gestures, actions, and images of her body and earth art. Even sectors of the artworld that just can’t help themselves from blathering about the evolving dollar value of Mendieta’s “mesmerizing” pieces note that a “cult” now swirls around her memory and work. 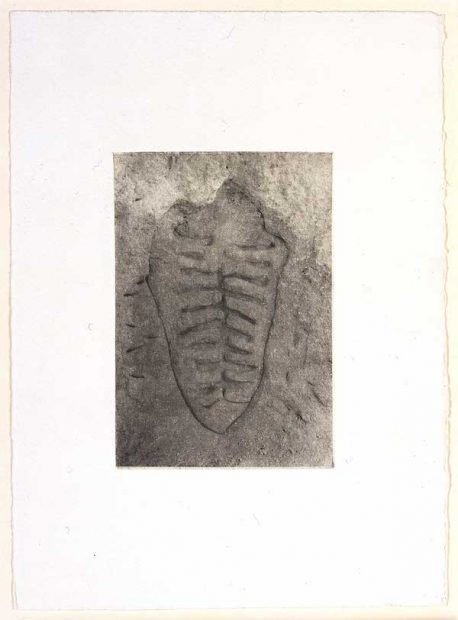 Mendieta’s four photo-etchings on chine collé mounted on Arches cover paper at the Blanton echo the seemingly gentle wisp of legend that sometimes informs discussion of her artistic legacy. Generated after her first return to Cuba in 1981, the images, Detchon notes, are of “abstract figures named after Taino and Ciboney goddesses” that Mendieta carved “in the limestone grottos of Jaruco Park outside of Havana, where indigenous people once lived.” The artist had intended that future visitors to the park would encounter the petroglyph-like carvings, but time erased them from the stone. Like Katz’ images of Mayan sites, the photo-etchings respond not so much to contemporary political exigencies as to the long reach of ethnographic and anthropological connection.

Art movements, of course, are never tidy chronologies that we can wrap up and rest easy about, secure that we’ve nailed down every aspect. They’re messy and a little bit hysterical, and they’re supposed to be that way. From the Page to the Street serves as a brilliant reminder.

An important read. Ashamed to say I’m having to put google to work…Thank you.