Art at the Dog Show. Photo by Melissa Phillip/Houston Chronicle

Of course it’s hot and muggy in Texas this time of year, but it suddenly seems like it’s literally the dog days of summer around here. If you missed the five-day “Houston World Series of Dog Shows” (and its accompanying exhibition of student art) that ended yesterday, don’t worry—there are more dogs on the way! 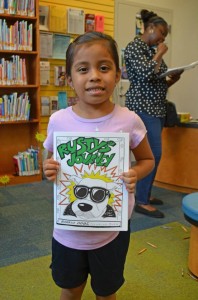 Houston’s DiverseWorks, Barrio Dogs, and Box13 Artspace have teamed up to present No One’s Dog, a community-based project that uses art to bring attention to Houston’s animal overpopulation crisis. The project involves a photography exhibition at DiverseWorks (July 26-August 9), a community awareness event at Box13 (August 9, 5-7pm), and a commissioned coloring book created by Houston artist Michael Bise. The coloring book tells the story of Rusty the dog (in English and Spanish), one of Barrio Dogs’ greatest success stories, and will be distributed free of charge.

Austin animal lovers have been enjoying the Blanton Museum of Art’s summer exhibition In the Company of Cats and Dogs. They’ve already held their Pooch Parade and their Doga Class (yoga for dogs and their owners) but, in August, they will be hosting a few serious lectures on how we relate to our cats and dogs.

Speaking of Austin, has anyone in town fessed up yet to the friendly dognapping of Marfa’s missing art dog?