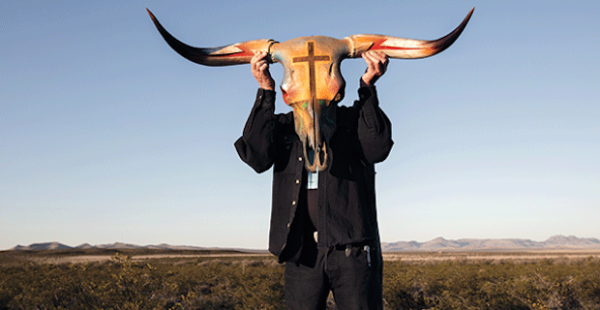 West Texas-based artist Boyd Elder died on Saturday night. He was 74. His daughter posted on Facebook: “The rumors are swirling about our father is passing into the cosmos,” the post reads. “It breaks my heart to say it is true. He is stardust.” Marfa Public Radio made the announcement yesterday.

Elder was born in Valentine, Texas to a prominent family with deep West Texas roots. Soon after, his family moved to El Paso, where Elder developed an interest in painting. Elder was particularly enamored with painting and pinstriping dragsters, hot rods, and motorcycles. 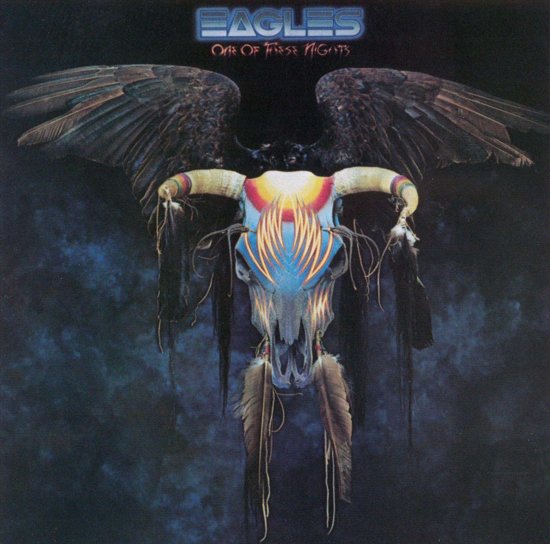 Elder studied painting and sculpture in Los Angeles at the Chouinard Art Institute in California (which became CalArts), and would hang out at LA’s famed Troubadour club with musicians like David Crosby and Joni Mitchell. In 1972 he put on a one-man LA exhibit called El Chingadero where the band the Eagles played one of their first public shows. A few years later, Elder used a cow skull, paint, and feathers for a piece that became the album cover of The Eagles’ One of These Nights. He also created the cover for the Eagles’ Their Greatest Hits (1971-1975), which is reportedly the best-selling album of all time. 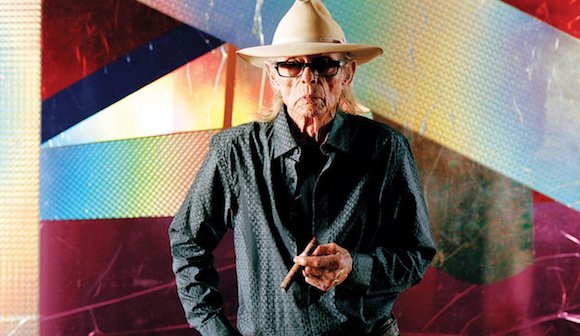 Elder actively made art until the end, working in his barn in Valentine. In 2016 he displayed works at Bale Creek Allen Gallery in Austin from his American Fetish series. Elder was recently profiled in Texas Monthly.

A deep loss for West Texas and beyond. Boyd Elder was also the official caretaker and site representative for Prada Marfa. Rest In Peace.

ALL MY FRIENDS ARE GONNA BE STRANGERS
Boyd played an instrumental song on guitar in the 1970’s called, “Armchair Traveller.” He played it in my garage apartment in Denton and locked me in to that three chord change for decades, Am, G, F.
He and a few other cowboys were escorting Joni Mitchell on her “Miles of Aisles” tour. I was hanging out with them at the Fairmount Hotel in Dallas before the concert and asked Boyd if he wanted to meet up after the show. He said, , “No. I’ve got a date with Joni.” “Sure,” I thought.
The “Miles for Aisles” tour rented three pianos from Sound Productions, one in Mitchell’s hotel room, one backstage in her dressing room, and a Steinway Grand onstage at the Dallas Convention Center. I worked for Sound Productions and delivered the pianos.
After the concert, retrieving the piano in her dressing room, Joni came strolling in, all smiles, wearing a sequined jacket with, “Boogie,” on the back, and Boyd Elder on her arm, toting a case of Heineken beer. Off they went into the night.
From L.A. to Dallas and back, I sometimes stopped in Valentine. Before Boyd even said hello he would always ask, “You got any drugs?” One of those stops, he showed me a steer skull hanging on a fence, being “cleaned” by maggots. As I recall, he told me he met Joni Mitchell in art school.
Around 2,000, Boyd’s series of large paintings on aluminum canvases premiered in Dallas at the Red Jacket on Greenville Avenue. I photographed the show. The gallery lighting of those canvases was critical, experimented with, tweaked.
Adios to a one-of-a-kind stranger with a heart for art.

She’s not Boyd Elder.
She’s not from Texas.
She’s Phyllis Kind;
prominent Gallerist
and one hell of a kick-ass
Broad who did great things
for art and for her artists.
RIP.

PS: who is getting Elder’s art barn?
No idea where ‘Valentine’ Texas is-
no idea if my curmudgeon of a car
could get there- but it sure sounds
like a cool place to make some art!

Boyd
Met you, brother, in LA in 1990. You were part of a show at John Pochna’s Zero-One gallery on Melrose at La Brea.
Think we drank a lot of beer and talked a lot of art.
Tomorrow I’m headed to your friend’ J’s hse. I know she has some of your work cause I saw it there.
Be well and kiss the stars for me.
FP

So sorry we lost a good artist. ….RIP, Boyd

My thanks for always being unconditionally kind and interested in me. I’ll always remember you storming into Hugos one evening and saying in your low loud voice, “so I understand you’re my sister!!“ I hope to see you again Somewhere!