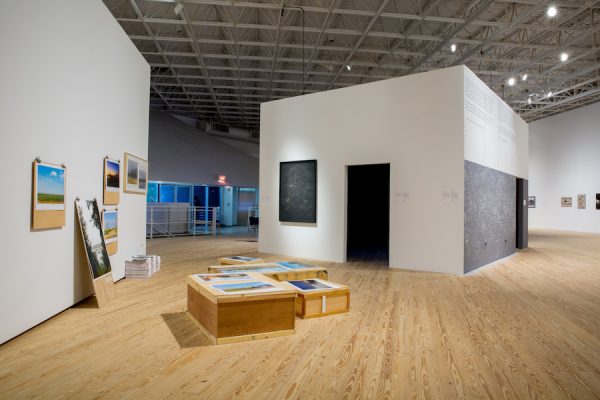 Walls Turned Sideways: Artists Confront the Justice System, curated by guest curator Risa Puleo, is on view at the Contemporary Arts Museum Houston through the rest of 2018. The exhibition is a critique of the justice system. It is a massive undertaking, attempting to catalogue systems of incarceration — including the prison system and detainment centers — in the United States. The exhibition is organized to guide the viewer through how the system works; it is divided into sections related to the justice system, police, and prisons, with sectional wall labels that begin with “profile” and end with “exits.” These divisions serve to make the museum experience didactic and manageable, while also acting as a metaphor of a structural system. 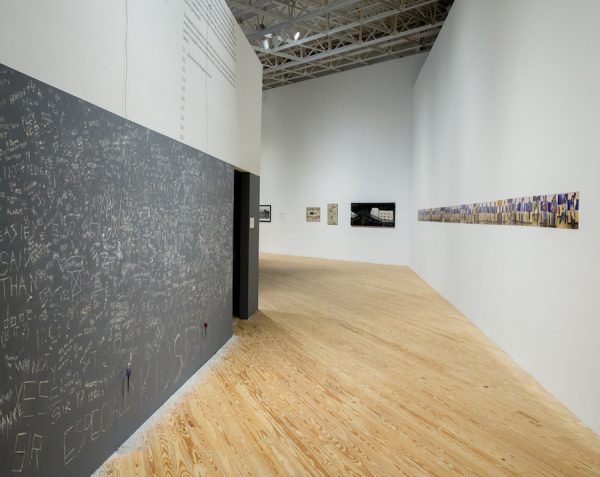 The exhibition’s title comes from an Angela Davis quote: “Walls turned sideways are bridges.” Puleo, in a CAMH-produced Youtube clip about the exhibition, notes her use of the quote due, in part, to the parallel between prisons and museums as “institutional structures” in relation to access. Puleo reiterates the structural parallel on CAMH’s walls, and the first work the visitor sees (if they follow the exhibit’s intended circuit) is Andrea Fraser’s Index II (2014) which charts the increase in the number of museums and prisons, and how that relates to two divergent classes within the United States. Fraser’s piece makes an argument, then, for this exhibition’s placement within a museum — another institutional structure. The show asks, “…if the museum is the repository for all society values, how is the prison the repository for all society seeks to disown?”

Walls Turned Sideways features well-established and emerging artists. Glenn Ligon’s Runaways (1993) are lithographs that use 19th-century runaway slave advertisement imagery above descriptions of the artist by his friends. Ligon’s use of imagery from slavery in the United States with the textual description by his friends suggests a connection between the past and present in relation to profiling. Profiling and race is made evident in other works, such as Dread Scott’s nearby Wanted (2014) in which the memory of witnesses via a passing encounter is part of a social practice piece. The show’s “profile” section is followed by “arrest.” One does not escape this system.

Autumn Knight’s moving performance Do Not Leave Me (2013), in which she approaches and embraces the audience, is set to Nina Simone’s version of Ne Me Quitte Pas, while Knight carries a (facsimile) gun. The wall label states that this performance explores Open Carry laws, and who these laws protect and do not protect. When Knight moves to lie on the ground slowly, with her hands up — here viewers watch her performance on a television screen — the sense of the proliferation of this image (as it has been regularly seen as news or media on television, computer, phone, and other screens) multiplies and expands, as does the record of racial violence and trauma in this country.

Shaun Leonardo’s Central Park 5 (Drawings 1-5) (2017) uses images from the wrongly convicted Central Park Five’s trial. The institutional record of their “guilt,” as it is also described in the exhibition, is that although these men (who were teenagers when they were convicted) were exonerated due to DNA evidence, the public archive of the court of law has not been corrected. The archive, in court document form, still holds these men guilty — and Leonardo’s use of erasure to create meaning discloses how one might try to render the absence of justice in visual form. Titus Kaphar’s work also places the permanence and confusion of the criminal archive in a different light. The Jerome Project (Asphalt and Chalk XVIII) (2015) by Kaphar, recently named a MacArthur Fellow, is a delicate drawing of a mugshot. Kaphar found 99 mugshots of men sharing his father’s name while searching an online archive for his father’s mugshot. The wall label does not tell you which Jerome is depicted. 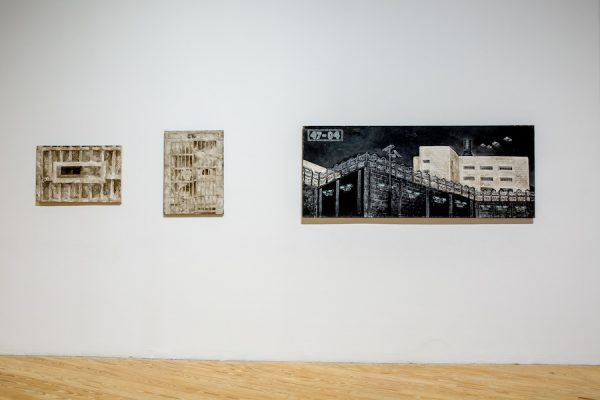 Surveillance is turned around onto prisons themselves with works such as Josh Begley’s Prison Map (2012 – present), which features an aerial mapping of prisons, and Ashley Hunt’s Degrees of Visibility (2010-present) featuring photographs of the architecture of prisons, including with each image the location and number of incarcerated individuals. Prison architecture is a focus of other works in the show. Martin Wong’s paintings feature the exteriors and interiors of prisons, with some including prisoners in cells. The architecture of prisons takes on a more abstracted form in pieces such as Trevor Paglen’s Color Study (San Quentin State Prison, San Quentin, CA) (2016) which, without its title, becomes a color study photograph of a sunset. Kapwani Kiwanga’s video A Primer (2017) performs a study of the history of institutional control through architectural use of color — white, green, pink. 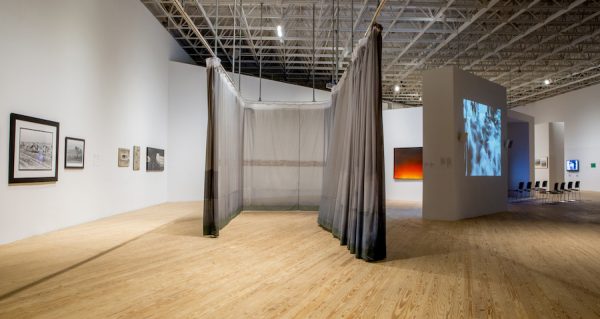 Architecture functions differently in Maria Gaspar’s Haunting Raises Specters (By A.G.) (2015), which features a partial image of the Cook County Jail in Chicago printed onto curtains that the viewer is allowed to touch, enter, and move within — to be within the architecture of “a jail.” The “ground” (the exhibition section this work is in) is nebulous, and the curtains read like dirty shower curtains, further amplifying the tensions of entering the work or standing near it. The curtain “walls” are diaphanous and transparent; we see within and without, which is a gesture toward an incarceration experience granted to us only within the context of a museum. Also part of the “ground” section: Coco Fusco and Paula Heredia’s The Couple in the Cage: A Guatinaui Odyssey (1993) critiques institutional forms of viewing and how museums’ histories of display and looking are predicated on racist histories of displaying people. Fusco and Heredia’s piece works well to end where we began — with Fraser’s Index II — with the idea that the museum is also an institution.

In Walls Turned Sideways, the artists and curator do confront the justice system, and question if any justice actually transpires within this system. The exhibition’s goals are admirable, and met, though at times the CAMH space can’t quite contain the magnitude of the exhibition. Some works overtake others (particularly some of the pieces involving sound), and, the intended circuit is a bit difficult to navigate — viewing the show in the CAMH creates confusion at times. Perhaps this is another example of the institution not being able to bear the burden of its goal. Perhaps this is a metaphor of failure. The exhibition needs more space, or to be staggered through a series of exhibitions. But this is a small critique, and one not meant to diminish the importance of the show overall.

The very subject of Walls Turned Sideways immediately asks for more attention, and for more work to be shown. Another recent example of a focused art consideration on issues around incarceration include Aperture magazine’s 230 issue, Prison Nation (Spring 2018), which was organized with scholar Nicole R. Fleetwood (who will present a talk at CAMH on November 29, and who is working on a book titled Marking Time: Prison Art and Public Culture). These combinations of social practice, institutional critique, and artistic response can lead the viewer to question systems of knowledge, seeing, and being in relation to mass incarceration in the United States.

Through January 6, 2019 at the Contemporary Arts Museum Houston.