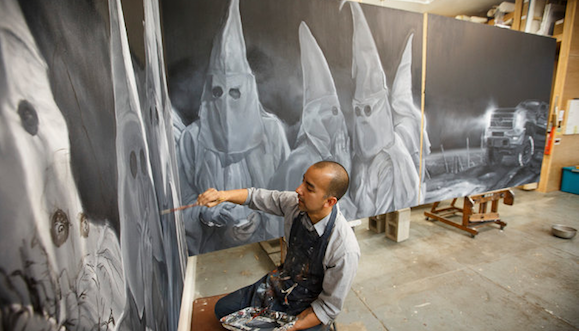 Vincent Valdez, The City I

Last year, Glasstire reported that the Blanton Museum of Art at The University of Texas at Austin had acquired Vincent Valdez’s City The City I and The City II. The news made the New York Times and Glasstire’s Christina Rees wrote more about the issues involved. Today, artnet News has released an article entitled “Artist Vincent Valdez Made a Painting So Provocative This Texas Museum Waited a Year to Unveil It,” implying that it wasn’t the plan all along.

The Museum has long planned to first work with community groups how best to present Valdez’s work before putting the art on view. As stated in a Blanton press release:

“Expanding knowledge and human understanding is among the university’s core values and central to the Blanton’s mission,” said Blanton Director Simone Wicha. “The university serves as a platform for complex inquiries into societies past and present, and at the Blanton we cultivate these conversations around great works of art. A leading Texas-based artist, Vincent Valdez is committed to exploring some of the most persistent and challenging social issues of the day.”

The City paintings are comprised of two works: The City I, a 30-foot wide panorama, a four-part canvas portraying a group of men, women, and a toddler in Ku Klux Klan regalia on a bluff above a glowing metropolis; and The City II, a single canvas depicting a pile of mattresses amongst other discarded trash.

To display the painting, the curators had a special gallery built with a sign warning that the work “may elicit strong emotions.”

The Blanton is circulating false news. Much of their educational and contextual efforts were in recent response to months long resistence to the artwork. I protested the painting and they are sheltering views like mine despite gaining publicity for calling it a ‘provocative and controversial’ artwork. This piece highlights the hypocrisy of liberal racism and is a completely unnecessary creation.