Blanton Museum to Rock the Stage (or Conference Table) at SXSW 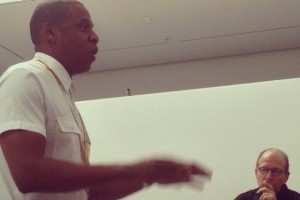 Jay-Z and art critic Jerry Saltz at the filming of “Picasso Baby” at the Chelsea’s Pace Gallery. Photo: Culture.com

Just when pop musicians are tripping over themselves to be declared “performance artists” by the art world, Austin’s Blanton Museum of Art is working it all backwards and inserting itself into the music world. A panel developed by the Blanton called Museum Music: Art Galleries as Performance Space was submitted for consideration to the largest music festival of its kind in the world, the SXSW Music Conference, held in Austin each spring. The Blanton recently announced that the panel was one of 2% of submissions that were chosen.

Museum Music will bring together panel organizer and Manager of Public Programs for the Blanton, Adam Bennett, SoundSpace artistic director Steven Parker, and experts from art museums nationwide for an in-depth look at opportunities to connect visual and sound art. The Blanton’s SoundSpace immersive concert series will serve as the primary case study in a larger discussion of the increasing popularity of music performances in museums.