A Stroll Through America’s War Garden with Cynthia Mulcahy 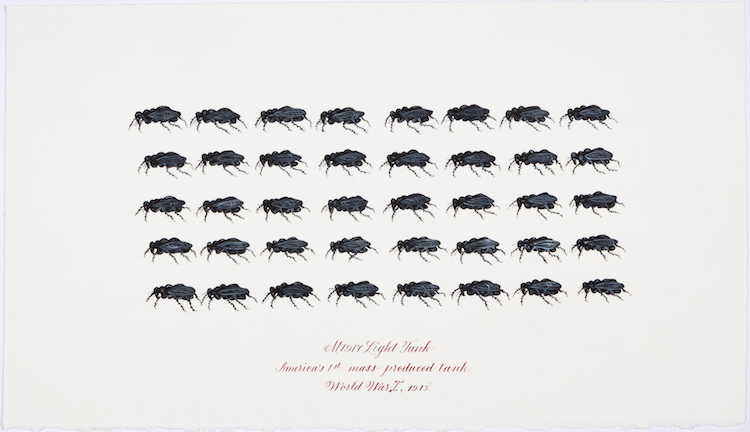 Hey all. Happy Fourth of July! How’s everyone feeling these days about this great country? How are we with Texas?

My colleagues and I spend a lot of time talking about how Texas artists are sticking it out in this heart of darkness and trying to speak to our current political moment from the actual trenches. For the most part, I think this is true, and true of a lot of us who work in and around creative spheres, and academia, and journalism. I have a friends in other states (and countries) who can’t believe any of us are still choosing to live in this big red state. And while very few of us are in any position to pick up jobs and households and move to Vermont, I’d also say that, artistically, Vermont is not going to shake things up in the coming years in terms of really compelling or trenchant art. But Texas will. I had an art journalist from Maine ask me recently, with some disbelief, if any artists in Texas were making political work, and I was like: “Are you freaking kidding me? How’s all that landscape painting going for you up there?” (I like landscape painting, but you know what I mean.)

This week, we’ll run a themed photo essay titled “Ten Texas Artworks about America,” and the works pictured are not happy works. They are about racial violence, family problems, military posturing, rampant consumerism… . This could be a reflection of the kind of art Glasstire’s editorial team favors in that it raises criticism about what ails our society. Or it could be about the fact that the only art work that feels credible recently is work that sends up these kinds of retorts. But I’d say splitting this hair is unnecessary in July of 2018. Some great work is overtly political, some lame work is mildly political, but in the end all art is political — even a landscape painting. I think Glasstire could run this same kind of photo essay with different works every month.

With that, I admit that current politics is making pretty much all art work (and writing, and teaching) feel more vitally or incisively political here than it felt even two years ago, though with their crazy-sensitive antenna, some artists have been on this kick since the Reagan era. Cynthia Mulcahy, an artist who was one of Dallas’ most credible gallerists and dealers in the ‘90s and into the aughts, closed her gallery about ten years ago and has since dedicated herself to collaborative and solo art making. Her current solo show at Talley Dunn in Dallas probably won’t get the attention of a couple of her earlier collaborations, but it’s a nonetheless quietly furious show with just a lick of humor, a charming presentation, and a bitter finish. It is good Texas art about America, and specifically about America’s obsessive military industrial complex.

It’s titled War Garden, and it’s anchored by about a dozen gorgeous watercolors done in the style of traditional botanical illustrations, and in this case the aesthetic is repurposed to ‘illustrate’ the last 100 years of America’s war machine. The fauna on the page doesn’t necessarily relate directly to bombs or tanks or submarines, in the way of Chris Burden’s All the Submarines of the United States of America, but rather Mulchay goes about this same overwhelming and often depressing subject in a more elliptical and playful manner. The works manage to be unsettling (and I think extremely sad) on close inspection and after a moment of reflection. They require this intimacy — they’re modestly-sized and the colors are very pale. Her Butterfly Bomb is a watercolor of four delicate, blush-colored butterflies (the sexy, subtle, and assured calligraphy below them reminds us that this invention is also called a cluster bomb and was unleashed by the US military in 1944), and she’s placed the winged insects on the picture plane in vertical column, their wings stretching outward and down expansively, in a way that evokes airborne spectacle and fallout.

America’s first mass-produced land crawler, the m1917 light tank of WWI, is illustrated by 40 beautifully painted houseflies, lined up in tidy formation (pictured at top). Flies… tanks: Built to last, armored, anonymous, capable, and… invasive, and regenerating. Fruit flies, house flies. They’re lab-test animals, and pests, and also a lynchpin in our entire planet’s ecology. It’s not particularly fair to compare beasts with man-made machines, but the inability of society to jettison our warring nature certainly makes it feel like it’s some inevitable or crucial part of what gets us up in the morning, our histories, our worldviews. It seems like half the world is in a hot or cold or civil or uncivil war right now. Aren’t we better than this? Were we ever better than this? 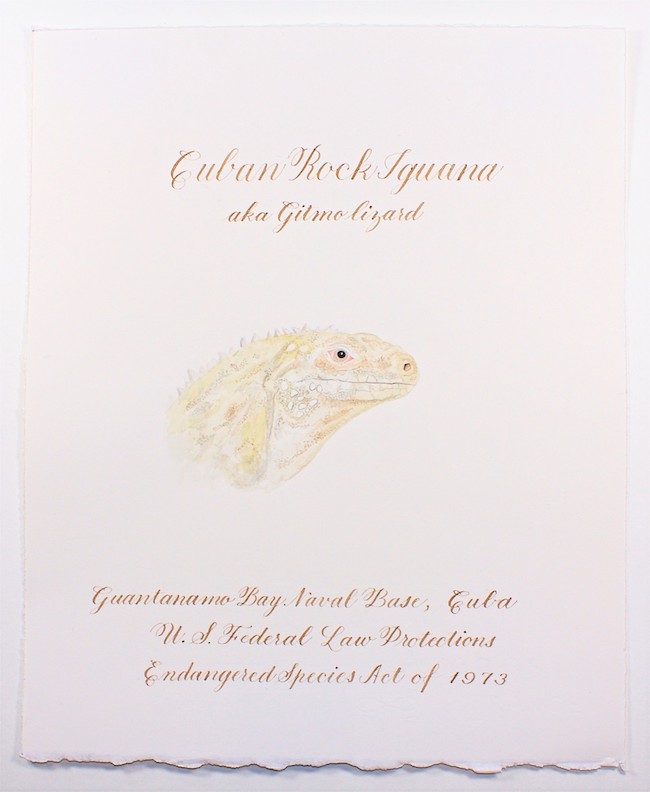 Mulcahy’s Cuban Rock Iguana is aka Gitmo Lizard. The script underneath the sweet and lovely portrait of this scaly guy lists him as a member of the Endangered Species Act of 1973 (written by US legislators, signed by Nixon). It only takes a flash to understand that while the iguana is protected by the US government, the most famous inhabitants of Guantanamo are anything but protected. I’m not sure this is the best use of Mulcahy’s MO — it seems a little too on-the-nose to me — but I like that she doesn’t take any one set path to making her points, and after all, this is an interesting point. The concreteness of her message with Gitmo Lizard may have more appeal to more viewers because it reframes the mysterious priorities and massive divides in the human impulse in plainer terms, and amongst these works, it does it relatively quickly.

Like Mulcahy, I’m not sure it matters how we arrive at that point. Here we are, on July 3, 2018, and many of us are still grappling with the hairy truth that America is both great and awful, all at once, and it has been for a very long time.

At Talley Dunn Gallery in Dallas through July 28, 2018