by Patricia Mora May 20, 2019
FacebookTwitterEmail 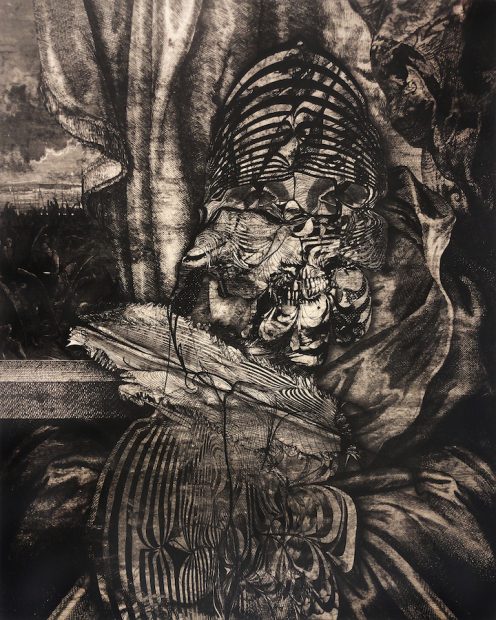 Ted Kincaid, The Whore of Lies

In introducing five new intaglio pieces titled The Kakistocracy Portfolio, at Talley Dunn Gallery in Dallas, Ted Kincaid is moving his art practice into strident new terrain. Many of us are used to seeing Kincaid’s work revel in brilliant hues that emanate from cloud motifs and explore both “the real” and its commingling with the digital depths of psychological constructs. Liminal space is the kind of interlude or emotional antechamber, so to speak, in which Kincaid has seemingly felt most at ease. However, things change.

Before you race to a glossary of Greek terminology, the term “kakistocracy” denotes a society governed by the least competent among us. It requires only a small leap of imagination to understand how this term has come into play most recently. Kincaid is a Dallas-based teacher, and well aware of the outrageous strain placed upon students after a series of shootings that seems to show little signs of abating. Massacres make headlines, but they’re also a trenchant means of understanding what kind of ethos is — or is not — operating in current society. Consequently, that’s fodder for the creative imagination, albeit one that’s drenched in a decidedly lurid cosmography. 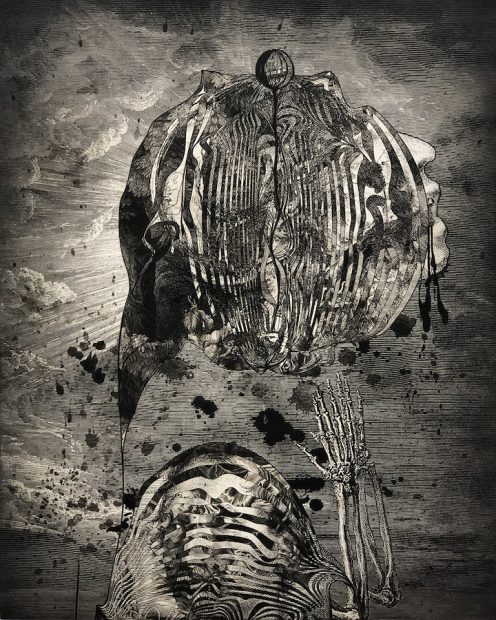 One of Kincaid’s works in this new suite of prints is titled Thoughts and Prayers. The verbiage, of course, has been a meme connected with the Parkland shooting in Florida after a 19-year old entered Marjory Stoneman Douglas High School and shot to death 17 people. So far, no action has been taken by governmental officials — and none seems to be in the offing. Kincaid’s way of addressing this situation is to give it a nomenclature that draws upon narrative iconography from the 16th century; he’s giving it the desolate arcana and subcultural landscape it deserves, and he’s also offering us a context via which the timeless intersects with the timely.

Hence, we’re treated to a ruined and knotted landscape of bones, skulls and material that becomes a kind of magic theater; it allows us to explore our own contemporary terrain via the long lens of history. The skeletal remains and almost watery moiré patterns that once might have constituted an altarpiece or landscape for portraiture is now a moment for flicking a gibe at evangelical bromides. Also, it might be noted that the “thoughts and prayers” approach was berated by none other than St. James, who pointed out that “faith, if it is without works, is dead.” Kakistocracy, indeed. 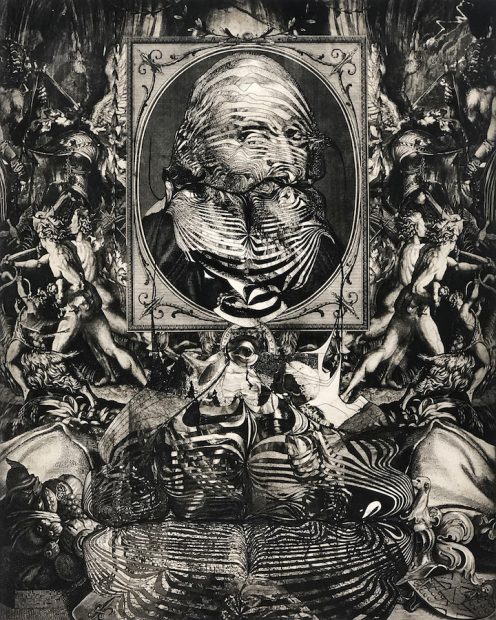 Another work, Divergent Truths, shows an aristocratic figure elaborately framed. His eyes are askew and it’s clear the fellow is unable to see rightly. Consequently, here is another image that absolutely ricochets with current news delivered on a daily basis. We’re inundated with charges of “fake news” and, at this juncture, the public is utterly awash in misinformation and left with a sensation that a cosmic battle is being waged for our psyches. There’s little hope held out by Kincaid. And he’s right to hold our feet to the fire. At least we know this is part of a long, tortuous journey that has been marching forward for centuries and is continuing until this very moment. Take a look.

A Digital Art Fair for Texas Art: The...

Great work Patricia. I rarely comment, but agree this is important. Stunning and timely body of work by Kincaid.

Thank you so much for taking time to comment. I’m grateful for the generosity of your note. PM

I hope it’s not unhelpful to note that “kakistrocracy” actually refers to government by the “worst, least qualified, or most unscrupulous citizens”(not just the incompetent).

I hope that the work will have a lasting effect on the gallery.
Thanks Ted.

Incredible work, Ted, and important content. Would love to get there to see the real thing!