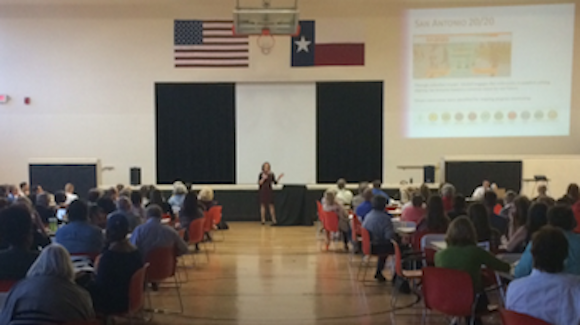 Two years since Houston Mayor Sylvester Turner took office and a year since Jonathon Glus left the Houston Arts Alliance (HAA), the two offices have come together to announce its inaugural “Let Creativity Happen!” grants. The grants, which will be awarded four times a year at a maximum of $2,500, has the mayor touting, “Houston is full of creativity and it is with great pleasure I congratulate these artists, addition to this new ‘express’ grant-making approach, I have confidence in the Houston Arts Alliance under new leader John Abodeely as it provides support, service and expertise to the arts and cultural sector throughout the City.”

According to the City’s press release, “’Let Creativity Happen!’ is part of more responsive grants program stemming from a two year-long evaluation called for by the City of Houston’s Arts and Cultural Plan.” Remember that?

Go here for more information and upcoming deadlines. Meanwhile, here is the list of the first grantees:

Richard Ford, whose “That Fateful Park Bench” will be an immersive and “mobile” comic opera for performance on stage or on a park bench anywhere in the City of Houston.

Las Girls Collective, whose z’Screen-Dance” is a weekend-long intensive video dance workshop exploring site-responsive experimentation through the interdisciplinary process of mixing dance and film together in Houston.

Dinolion, whose “Merel & Tony Immersive Production” is an immersive dance, theater and concert performance in a to-be-determined location that invites an adventurous audience to engage in the stories revealed.

Colby Deal, whose “Beautiful, Still” is a portrait series of the people of Third Ward. The images will be presented in multiple locations within the community as well as a curated show during FotoFest Biennial at Alabama Song Gallery.

Britt Thomas and Ashlynn Ivy , whose “Lullabies for Loss” is a collaboration between artist Thomas, and singer/musician Ivy. This project is intended to relay the emotional impact of pregnancy loss in all communities.

Keeley Steenson, whose “This Could Be Your Public Art- The Discovery Tour” is an interactive community art tour highlighting public spaces within the neighborhood of Spring Branch as potential sites for public art.