Houston’s Mayor’s Office of Cultural Affairs held its Arts and Cultural Plan Town Hall Meeting on Wednesday evening to a pretty packed house at the basketball court-sized Metropolitan Multi-Service Center. It was presented in the standard format of introductions, PowerPoint presentations, a facilitator cracking jokes to try and make everyone feel comfortable, free tiny water bottles and snacks, handouts and breakout sessions.

In the development stage of creating a new Arts and Cultural Plan for the city, the meeting was held to get input from the public. (They also have an interactive website for concerned citizens to add their two cents.)

The City’s consulting team and advisory committee had already gathered perceptions and thoughts from “community stakeholders” and organized them into six overall themes. In the breakout sessions, each table was asked to address them. The half hour allotted for discussion was barely enough to allow everyone to ramble on and off topic about: 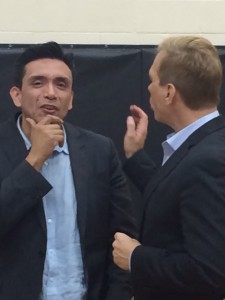 Then, volunteers from various tables were asked to stand up and report what their group came up with on a particular theme. Most tables probably had similar thoughts about each theme, although Tony Diaz of Nuestra Palabra presented an interesting idea (Theme 3) of assigning a certain amount of grants to each City Council member to bring in more neighborhoods and to raise the awareness of Council members about arts activity in their districts.

The room was filled with people from the visual and performing arts, as well as the general public. Those who have been following the ruckus of the past number of months aimed at the Houston Arts Alliance (HAA) were sure to catch some of the coded references to it. Others must have been quite confused when Tracey Conwell stood up to present on Theme 5 and was interrupted by an annoyed table-mate who felt the need to inform the room that Conwell was making everything out to be pro-HAA versus anti-HAA. This is the same Conwell, “attorney, an artist, and an advocate for the arts,” who made allegations of misconduct against Brad Bucher, HAA’s Civic Art Committee Chair, to the City Council. (Read Bill Davenport’s report of that meeting here.) The situation was made more uncomfortable by the fact that Sara Kellner, who replaced Matthew Lennon after he resigned in protest as HAA’s Director of Civic Art + Design, was sitting at the same table. But, when asked after the meeting ended, Kellner reported no enmity during her table’s 30-minute discussion period.

Mayor Parker has directed that the plan be finished before she leaves office at the end of 2015.

Houston Artists Go On The Record Against HAA...