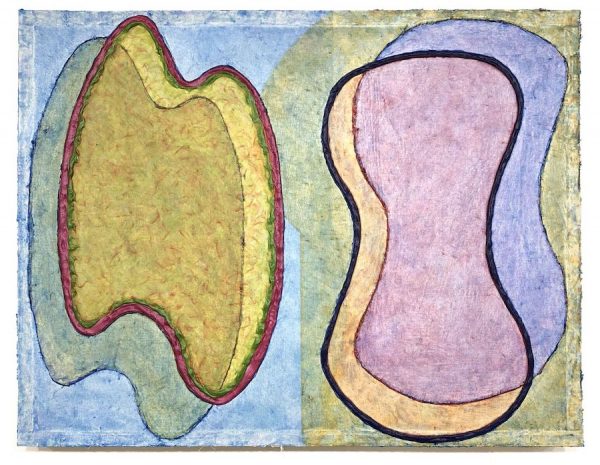 I sometimes wonder about the usefulness of abstract art in 2018. I don’t believe it’s intrinsically bourgeois. I’m a new-age guy; I like aromatherapy and spas. I think there is inherent value in the soothing experience of a sauna and likewise, and if art produces an equivalently ineffable, therapeutic feeling then it doesn’t have to “mean” anything. But, just like with ambient music, the danger of inertia is real. If abstract art isn’t “doing” something it fades into obsolescence — the décor of upscale chain hotels.

Mark Schlesinger has a show on view at Ruiz-Healy in San Antonio; he’s a New York native living in San Antonio who, in his home studio, engages in a fairly intricate process to make his abstract works that look simultaneously like close-ups of Easter eggs, human organs and plant cells under a microscope. Schlesinger adds additional segments of canvas to the main frame, giving his pieces a particular dimensionality. The paintings are sealed, giving them a waxy coat. Because he mixes his own paint, the colors have a strange resonance that sidesteps any feel of being mass-produced.

The catalogue essay for the show, by Michael Schreyach, astutely notes that Schlesinger’s pieces seem “built” more than painted. Even without knowing what the process of making the works is, one could intuit a complexity, an energy transforming them from paintings into contraptions. 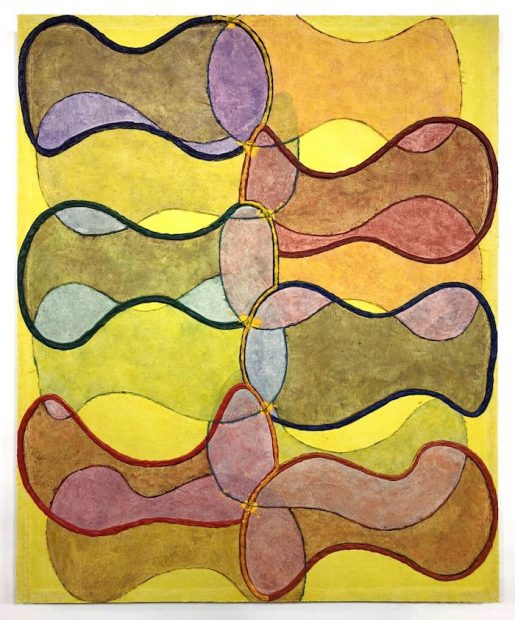 In Giving Oneself, the soft shapes resemble figures in an inscrutable medieval encyclopedia. Many of the paintings have a gauzy logic just out of reach. In Time and Again, the interlocking ovals with their sealed acrylic veins creates a moving, elegiac metaphor for connection as something intrinsically discreet and fleeting before moving onto the next loop. 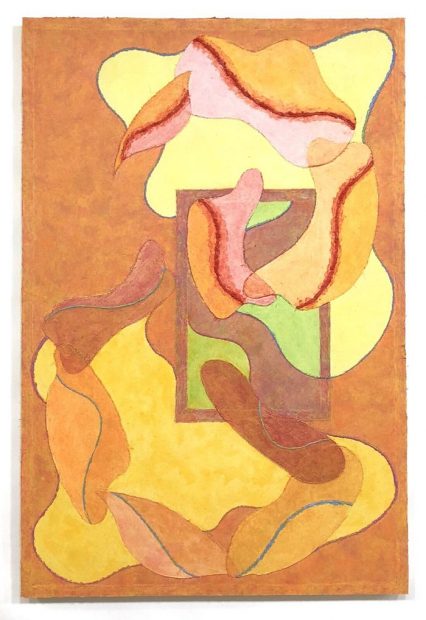 Bemused is one of the few pieces with a straight-edge shape (a rectangle) that seems to be organically separating into a topographical map or the stitches of a suppurating wound. The works with their unique coloring, intersecting canvasses, and lacquer have a disquieting, shifting, physicality — they appear simultaneously as organic and inorganic, flickering back and forth like light on water. 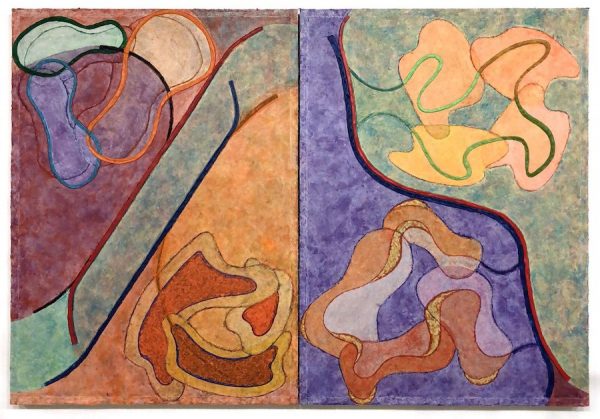 In the pièce de résistance, the diptych It Always Is, the two woozily symmetrical pieces are placed almost flush against each other. The first canvas is demarcated by ascending linear lines that intertwine in the second canvas on a more improvisational downward slope. Effortlessly, the diptych is a visual symbol for the arc of life and the undefinable meaning of one’s existence, despite the ultimate destination being the same.

The show also contains several of Schlesinger’s watercolors that provide an ecstatic counterpoint to the other works. Where the main pieces feel contained some inexorable cycles and pathways, the watercolors are expansive and celestial. They are positioned at the back of the gallery so the natural progression is to end on them, like coming to a clearing at the end of a long and circuitous journey.

Art as Anesthesia: Schlesinger’s “Along Here and There”...